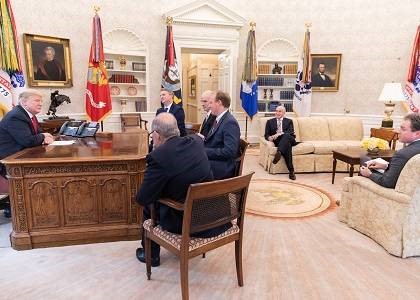 He returns to Texas Tech after 18 months in Washington, D.C.

Associate Professor Timothy Fitzgerald of the Jerry S. Rawls College of Business at Texas Tech University is back on campus after an intensive 18 months serving as chief international economist at the Council of Economic Advisers (CEA) in the Executive Office of the President in Washington, D.C.

The council, which has three members and two chief economists, is a federal agency that advises the president on domestic and international economic policy. Fitzgerald's service at thecouncil began in July 2017 when he was appointed as its senior economist covering energy and the environment. The one-year appointment was extended for another six months after the council's chairman appointed Fitzgerald as the council's chief international economist.

"It's an interesting job that is very fast-paced and involves analysis of very policy-relevant issues," Fitzgerald said. "My primary responsibility was to cover energy and environment, but I also spent a lot of time thinking about trade and other national and international economic issues."

The CEA was particularly involved in the early stages of debate over tax reform. Fitzgerald also had a hand in several other key economic matters, such as trade issues with Mexico, Canada and China, and traveled abroad to represent the U.S.

"I really enjoyed my interactions with the representatives of the Mexican government," he said.

Fitzgerald twice represented the U.S. at the Organization for Economic Cooperation and Development in Paris and said he relished meeting people from around the world through his work in Washington.

Though Fitzgerald was not involved in the most recent government shutdown, he dealt with two previous short-lived government shutdowns. He also was frequently asked to review international economic issues around the world, a responsibility that involved a variety of sensitive topics and classified material.

"It was a fascinating time not only to be involved in many policy issues facing the country and the world, but also to have an opportunity to try to improve the analysis that goes into those decisions," Fitzgerald said.

Fitzgerald, a natural resources and energy economist who teaches business economics in the Rawls College, remembers the phone call that changed the immediate course of his career.

"I was sitting, minding my own business at my desk at Texas Tech, and my phone rang one day in the spring of 2017," he said.

A representative from the CEA was calling to ask if Fitzgerald was willing to be considered for a one-year position at the council.

"I figured I was just being added to the list but didn't really know or expect that it would lead to what it did," he said.

Within a matter of months, Fitzgerald was on a jet bound for the nation's capital to serve as the council's senior economist covering energy and the environment.

"I will say that it was not something I expected to ever be asked to do," he said.

Despite the prestige, Fitzgerald has maintained a humble perspective about his selection for the position. He was recommended by others he knew who had served in different years as the CEA's energy and environment senior economist.

"Those are people with whom I have interacted professionally, and they were familiar with my work, expertise and personality," he said.

Most people appointed as economists to the council are university faculty members, Fitzgerald said, noting that several factors narrow the pool of prospects each year.

"You have to be a United States citizen, you have to be willing to serve, and it's a big time commitment for people," Fitzgerald said. "You have to stop doing what you're normally doing, go to Washington and then pass a whole litany of background checks. So there's a much more limited pool of people who would be willing and able to serve at CEA than all economists everywhere in the world."

Fitzgerald expressed gratitude to Rawls College Dean Margaret Williams and Associate Dean Jeff Mercer for helping him capitalize on the opportunity to work at the council.

"I am thrilled that Dr. Fitzgerald had the opportunity to serve at theCEA," Williams said. "Not only did he take a bit of Texas Tech and Rawls College to the capital, enhancing our national and international stature, he has had exciting firsthand experiences to share with students and faculty on his return."

Once he arrived, Fitzgerald settled into an office across from the White House in the Eisenhower Executive Office Building, which houses many of the components of the executive office of the president. His office overlooked the South Lawn.

Most meetings of the CEA, which employs about 30 people, took place in the Eisenhower building, he said, "but it was very common for us to meet in the West Wing. We also worked with different cabinet agencies, so occasionally we would travel to, for example, the Treasury Department, the Commerce Department or the Office of the U.S. Trade Representative."

"I did interface directly with the president but only a couple of times," he said. "It was much more common for me to advise the members of the council and the principals from other White House components and agencies."

He emphasized that the CEA's role is not to make policy priorities or political decisions but rather to provide objective economic analysis. Nonetheless, information provided by the CEA to the president has the potential to influence the course of the nation and world every day.

"I've tried to do the best economic analysis that I could, and that's it; that's the job," Fitzgerald said. "You come in, you try to do the best analysis you can and you give the best advice you can."

Williams said she is pleased to welcome Fitzgerald back to Rawls College.

"We are already planning ways to leverage his expertise in energy economics and his experience at theCEA to benefit the research and teaching missions of the university," she said.

Fitzgerald said he was glad to return to West Texas, resume his work and research at Texas Tech and start getting more than three or four hours of sleep a night.