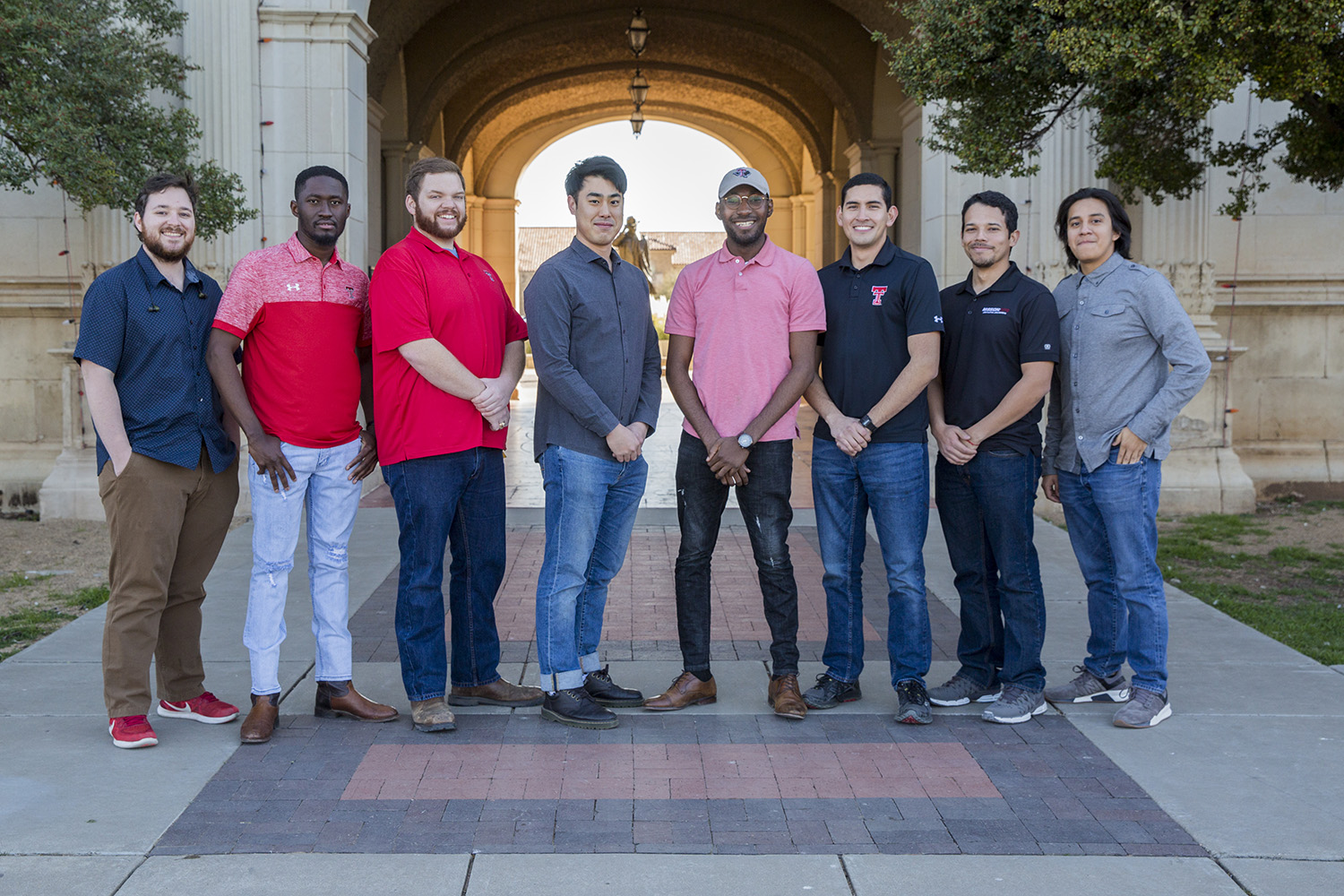 A group of mechanical engineering seniors is working toward a solution to the lack of long-term bike storage on campus.

For thousands of people on Texas Tech University's campus, it seems they've taken Queen's sentiment to heart: All they want to do is bicycle.

Though the university has many bike rack areas around campus for students and employees to lock their bikes during class hours, it's still lacking a solution for people who may want to leave their bike on campus during inclement weather or for an extended period of time. However, a group of senior mechanical engineering students are working to address this need as their final Engineering Design project.

The students, Emmanuel Adusei of Kumasi, Ghana; Princewill Ehiriudu of Lagos, Nigeria; Matthew Johnson of Virginia Beach, Virginia; Yeonjin Jung of Seoul, South Korea; Jesus Lopez of Houston; David Maldonado of Laredo; Kaleb Stephenson of Odessa; and Bernardo Zuniga of Tampico, Mexico, came together last semester during their Engineering Design I class with Joseph Dannemiller, an instructor in the Department of Civil, Environmental and Construction Engineering.

"Our Design I professor asked the class to come up with an idea for a good design project," Ehiriudu said. "I was brainstorming ideas when Emmanuel mentioned his bike had been stolen. It made me think that there had to be a better way to lock a bike on campus."

After what Ehiriudu admits were some crude designs that originally sought to more adequately lock a bike, the idea shifted and transformed into a long-term bike storage solution, which the team calls Raider Lock.

With a fully formed idea, the team went to work to further develop Raider Lock. They decided on a layout similar in size to a bus stop, which will allow users to securely store their bike for the day without carrying a lock or other equipment. The system is entirely self-contained, with motorized locking systems operated by solar power.

"It has to be solar powered because electricity can't be run to the stations," Johnson said.

The team also is creating the Raider Lock stations to be portable so they can be moved to different areas based on traffic needs throughout the year, Johnson said. Because of this, the stations have to be sturdy enough to support the bikes, but light enough that they can be moved by a forklift.

"The stations are going to be a combination of steel and aluminum," Johnson said. "The base pillars are going to be either C-channels or I-beams, something that's strong and can't just be broken or lifted up and carried away. We're hoping for it to be as close to fully automated as possible, so people literally just have to hit a button and it locks their bike."

The prototype the team is working to develop holds six bikes, but they're planning for a stall that holds 16 bikes total, Ehiriudu said.

With such an enormous undertaking and such a large group, the team easily could have broken down into nitpicking over who was responsible for what. However, the team hasn't had any issues with someone slacking or another trying to control the group.

"Everyone handles what they've been assigned," Ehiriudu said. "We all have a particular sector we take care of, and we help out wherever we can."

This camaraderie especially came in handy when finessing the locking mechanism became a challenge.

"I didn't realize how many different shapes bikes come in until I started this project," Stephenson said. "I thought they were triangles, but now we've got into it and they've got swoops. Some of them are tall and others are short. It's been a lot having to figure out how we can grab almost every bike."

In fact, it took five hours of computer work and engineering design every single time the locking mechanism was changed, Johnson said.

Challenges with the locking mechanism aside, the team is focusing on the final product.

"This semester, everyone is chipping in on the actual structure," Ehiriudu said. "That's where everyone plays a very important role, is actually getting the structure set up, running simulations and showing it's ready at the end of the semester."

The team also is receiving additional help from Samuel Okei Oghenetega, a sophomore computer engineering major. Oghenetega is assisting with codes and software for the project, Ehiriudu said.

To gain more perspective on the possibility of real-world applications for Raider Lock, the group reached out to Craig Cotton, the transportation demand management transit manager at Texas Tech's Transportation & Parking Services department.

"They sent me an email asking if I would mind sitting down and going over their project," Cotton said. "They brought a cost analysis to me. It wasn't very robust, but they're still working on that portion of the project. They brought it to me originally as a possible solution for our everyday, weekday parking. Right off the bat, I saw it more as a long-term parking solution where people could have a place to leave their bike under cover for a small fee."

With guidance from Cotton, the group began to build onto their cost analysis and found that, even charging a miniscule fee, the Raider Lock stations could break even in less than two years.

"I did a really easy price breakdown of what the fee can be," Johnson said. "If we charge 25 cents per stall for an hour, which I don't think people would have a big issue with because it's a quarter, and most classes are about an hour, that's cheaper than what parking your car costs or riding a Lime. So at 25 cents an hour for eight hours of use per stall per day, we break even after about a year and a half, assuming full capacity.

"That was one of the things that Transportation & Parking was really happy to see because they've looked at long-term storage solutions like this before, and it would take too long to pay it back, essentially, for them to be interested in it."

Now that the team has begun their Engineering Design II class, they are officially going from paper to prototype. To build the Raider Lock prototype, the group is relying on crowdfunding $7,500 to help them achieve their complete design.

"The station we're currently building is going to plug into the wall in front of the mechanical engineering building, unless we can get enough funding to have the solar power implementation," Johnson said.

As for other intrepid students who feel like they might have a parking and/or transportation solution, Cotton is always open to suggestions.

"We really like it whenever the students come to us with ideas," Cotton said. "We haven't solved all the world's problems, and these kids are smart. We just really appreciate it when they come to us with ideas that can benefit the university and them at the same time."