Stressed? For Metal Fuel Particles, That Could be a Good Thing 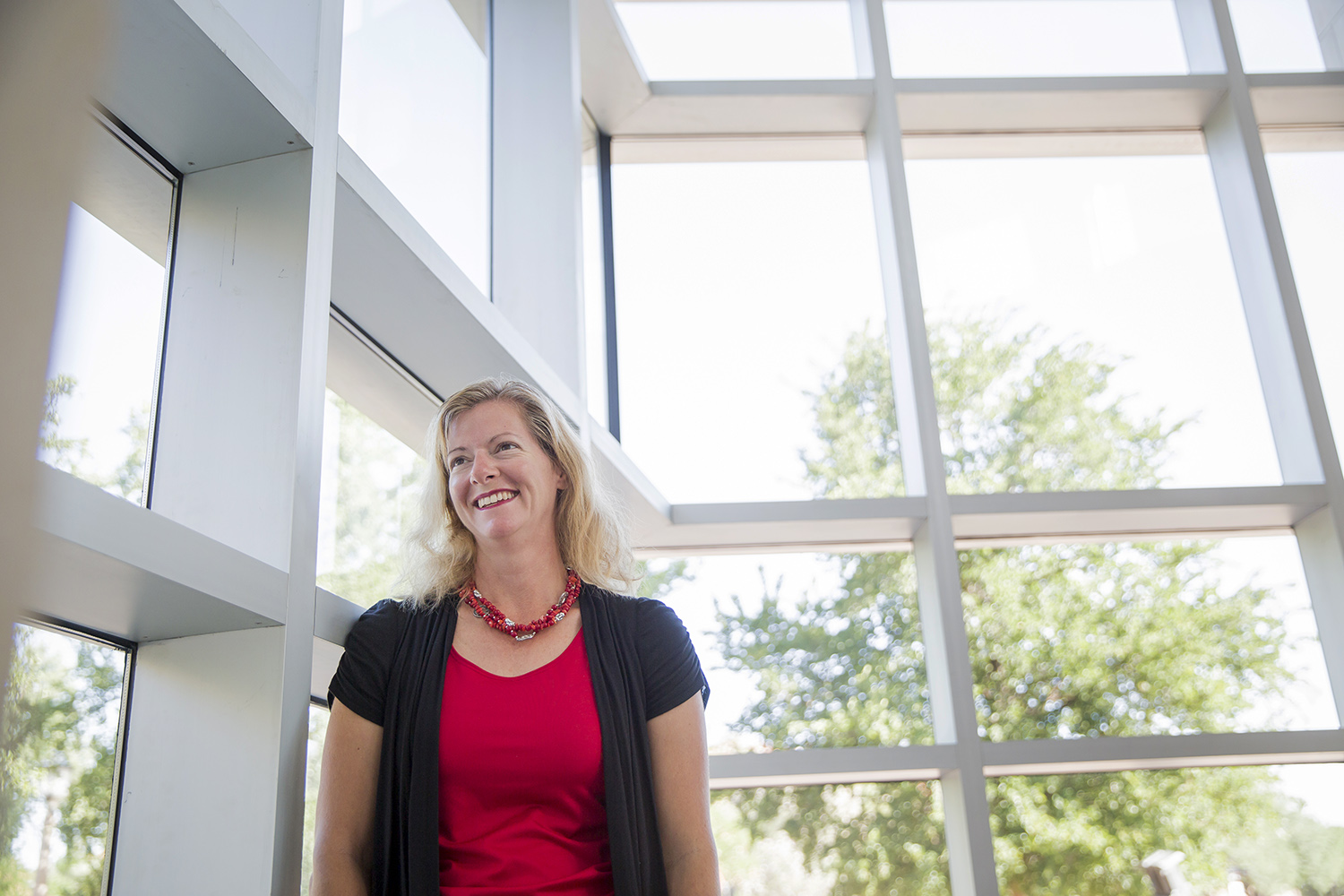 Have you ever woken up in the middle of the night with your thoughts racing about a major test or event happening in five – no, wait, now four – hours? You can't sleep. You can't eat. But you can run through thousands of possible scenarios that most likely never would happen in real life. The anxiety and stress people put on themselves before certain situations can be overwhelming.

For living, breathing people, being pre-stressed does not give us more energy. For metal fuel particles, however, pre-stress might be the key to making them more reactive and useful.

"In the world of generating energy, it's wonderful to use materials that are abundant on the Earth's crust," Pantoya said. "They're inexpensive, they're readily available, and they just naturally, inherently store energy within their molecular structure. Aluminum is a great fuel because of that."

Pantoya recently has worked with aluminum particles on the nanoscale, figuring out how to make the particles burn faster, through a grant from the U.S. Army.

Her current research, funded by a three-year, $450,000 grant from the U.S. Department of Defense's Office of Naval Research, is trying to find a way for the bigger, micron-sized aluminum particles to burn to completion.

"The idea is to take all these wonderful things we've learned about how nanoparticles can ignite and be more sensitive to ignition and generate energy, all those things we've learned about harnessing energy from aluminum, we are going to try and take some of those clever realizations and apply them to making micron-scale particles that are bigger and less reactive," Pantoya said. "Micron-scale particles are so big that, usually when they burn, they don't consume the entire particle. They're just like a big, thermal heatsink. So they might start to ignite, but then they kind of stop, and we can't harvest all the energy out of those particles that we want.

"So we're taking the ideas we learned from studying nanoparticles and applying them to micron particles so that, when we do make them burn, we get more energy out of them because there's so much stored."

To help the aluminum particles burn more efficiently and combust more completely, the inner core needs to get to a liquid state. In fact, the first stage of ignition is the melting process – getting enough energy generated to start the diffusion process, Pantoya said.

"Aluminum melts at about 660 degrees Celsius, or 1,220 degrees Fahrenheit," Pantoya said. "So, it takes a lot of energy to get it to a molten state. The technology we are studying to promote micron-scale aluminum particle combustion is based on the premise that the way we treat this material will enable more thorough melting of the particle before it reacts. So, it's actually the core. We're making the core melt more thoroughly, faster."

Pantoya and Kevin Hill, a doctoral mechanical engineering student graduating in May who's been working as a research assistant on the project, have taken a unique approach to achieve a more complete combustion of the aluminum particles.

"Aluminum at the surface actually is clad in an oxide layer," Hill said. "So aluminum naturally oxidizes to Al2O3, or alumina. Alumina is not reactive, it doesn't burn and it's an excellent barrier to oxygen. So iron will rust, and, usually, that rust is pretty damaging to the iron. Well, alumina is the aluminum version of rust on iron. But unlike iron, where the rust tends to be detrimental, on aluminum, at least for structural applications, the alumina is a good thing because it prevents further degradation.

"Now, the same thing happens on particles as small as you want to go. The surface of the particles also will be clad in an amorphous alumina shell that prevents oxidation and increases their shelf life. But it's a problem you have to overcome because you have to get free oxygen through the barrier into the aluminum for it to begin to burn. Otherwise, no combustion occurs."

Though others might see alumina as a nuisance, Pantoya and Hill see it as an opportunity.

"Most people look at the alumina as a real detriment to making aluminum more reactive," Hill said. "That's where we're different. We look at it exactly the opposite way. For us, the alumina shell is actually key to the mechanisms we're trying to activate. So, the shell is much denser, harder and stronger under compressive load – if you try to force it together – than the aluminum core. Aluminum is very soft, very ductile and it's really easy to deform in its pure form. So alumina and aluminum are completely opposite.

"Aluminum expands a lot when you heat it up, and alumina hardly expands at all. That's why industrial ovens are usually coated in alumina, because it's a high-temperature refractory. It doesn't burn no matter what you do. But also, it doesn't change shape very much. You don't have to worry about it breaking inside your oven, because it's not going to grow and then shatter. So, what we do is we try to induce larger stresses in the particle, and we do that basically through and annealing and quenching."

Annealing is a process in metallurgy where materials are heated to extreme temperatures. The process alters the physical, and sometimes the chemical, properties of a material to increase ductility (capability of being hammered out thin) and reduce hardness. Quenching is used to stop the annealing process by rapidly cooling the material down in water, oil or air to maintain the properties achieved during the annealing phase.

"The goal is to make the stress as big as possible because the larger the stress, hopefully, the faster the energy release will occur," Hill said, "or the more delayed the reaction will be such that you increase the amount of melted aluminum inside the particle. On the nanoscale, the percentage of melt of the aluminum inside its shell is appreciable before combustion occurs, before the shell breaks and oxygen gets in and it begins to burn. On the micron scale, I think it's a little bit different, but the larger stresses are still advantageous."

Though it sounds difficult, the process of pre-stressing the aluminum particles is surprisingly simple.

First, powdered aluminum (aluminum particles with zero stress) is placed into a protective box with good thermal transport properties. The box is then placed into a controlled oven set at 300 C (572 F) and held for a few minutes. Then, the box is placed in a brine bath made of water, salt and other minerals that cools the powder down back to room temperature.

"With the Navy, you're going to be on a boat for a long period of time," Hill said. "Everything that the Navy does is volume limited. Basically, there's X amount of space that you can fill up with things. If they can have more effective stuff in a smaller space, that's what they want. It could be missile technology, it could be fuel, it can be anything. They just want to maximize the use of their space."

With Hill graduating in May, Pantoya is relying on her newest mechanical engineering doctoral student and research assistant, Alan Williams, to take over for Hill.

Hill has been able to show Williams the ropes this semester, and Williams already has made his own mark on the research.

"Kevin has been a good mentor because he showed Alan how to handle the energetic materials and how to study impact ignition," Pantoya said. "Then, what Alan did is, he manipulated the diagnostics, the impact ignitor, to allow us to study the particles' sensitivity to impact ignition in a different way. He brought a new perspective on looking at how these materials are reactive to what was already established. And his idea was actually to look at that as a function of particle size.

"That's a huge contribution because, when you work with aluminum particles, they're usually not one particle size. They have a broad distribution. So Alan said, 'Well, how do different bins of particles behave differently when we anneal and quench them?' And Alan's downplaying his contribution. He's saying he learned everything from Kevin, but he didn't. He learned just the basics of how to use the instruments, but then he changed the instruments. He came up with his own ideas on how to study the effect of annealing and quenching on a whole range of aluminum particles."

Williams learned about the project while taking Pantoya's heat transfer class and approached her about working on the project.

"I asked to see Dr. Pantoya's Combustion Lab, and I really liked what I saw," Williams said. "I realized there was a lot of potential for me and for projects for myself. So, I decided to jump in right after that."

In fact, Williams will continue to work on different aspects of this research with the Navy at its research lab in China Lake, California, this summer.

"It's a small research lab, but it's continuing a lot of the work we're doing here with different perspectives from different doctors and researchers," Williams said. "They're interested in the same studies we are, but they do things in slightly different ways. That gives us a new perspective on what to bring back to our lab."

One thing that's certain is, no matter what the research shows, there's always more to uncover.

"Research is never really complete," Williams said. "Every time you answer a question, you just get more questions. You don't really look for the end. You just keep going forward."