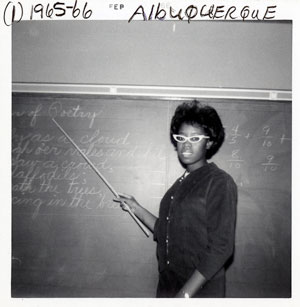 During the spring of 1965, Crockett became the first African-American to complete all four years of undergraduate study at the university and earn a bachelor’s degree.

Born in 1943, Stella Courtney Crockett grew up on Date Avenue in East Lubbock, just down the street from Dunbar High School where she would eventually play the b-flat clarinet in the high school band. The third of six children, Crockett spent her entire youth in Lubbock. She had no idea she would soon earn a place in Raiderland history as the first African-American student to complete all four years of undergraduate study at Texas Tech University and earn a bachelor's degree.

Originally, when the time came for Crockett to make plans after high school graduation, Texas Tech, then Texas Technological College, was not yet an option for African-American students. Instead, Crockett planned to attend the historically black Langston University in Oklahoma, to which she had received a band scholarship.

With her plans in place, Crockett graduated from Dunbar in the spring of 1961, then went on vacation for the summer with her family, visiting other parts of the state before she would head to Oklahoma.

Back in Lubbock, Lucille Sugar Barton Graves was making history by becoming the first African-American student admitted to Texas Tech after more than a year's worth of efforts to gain admittance to the university. When Crockett returned to Lubbock, she received a call from her band director at Dunbar, Roy Roberts.

"When Texas Tech integrated, the news was all over the state of Texas," Crockett said in her Southwest Collection/Special Collections Libraryoral history interview. "When I got back from vacation, guess what? Mr. Roberts called all of us [and said], 'You're going to Tech!' Not, 'Do you want to go to Tech?' 'You are going to Tech. You need to go to Tech. It's integrated now, and you need to go.' And we didn't fuss and fight about it, because we obeyed our teachers and our parents at that time."

Turning down the band scholarship to Langston University, Crockett enrolled in the fall of 1961 as an elementary education major. In the spring of 1964, she would witness Ophelia Powell-Malone, a transfer student from Huston-Tillotson College, make history as the first African-American student to receive a bachelor's degree from Texas Tech.

The following year, during the spring of 1965, Crockett joined Graves and Powell-Malone on the list of trailblazers as Texas Tech's first African-American student to complete all four years of undergraduate study at the university and receive a bachelor's degree.

Still, Crockett's decision to turn down the band scholarship to Langston wasn't the only hardship she had to endure in choosing Texas Tech. She joined the Goin' Band from Raiderland, only to find that she wouldn't be able to travel with the band to certain performances. Though the university was now integrated, she soon learned African-American students were not allowed to stay in the residence halls.

"We always looked forward to staying in the dormitory, that's a big part of college life," Crockett said in her oral history interview. "So I stayed at home, which was OK, but I still feel to this day that I missed that dormitory experience."

She also dealt with pushback from faculty and other students, some of whom used derogatory language when speaking to or about her. Through it all, she persevered, finding support along the way.

"I never felt in my heart that, 'Oh, I'm lesser of a person,'" Crockett recalled in her interview. "But I was intimidated ... by all of the newness, all the Caucasian people, how they treated us. I remember going to the Student Union. I would say it would be five or six of us black students, we had our little table. And I don't know if we deliberately chose to be in the back of that, but I remember being in the back in the corner. I think we felt comfortable. We would always just come in at different times when we got done with our classes, and we'd just go to that table. We all would eat together. And we never ate with anybody else."

After Texas Tech, Crockett earned a master's degree in special education from Michigan State University. She spent 43 years as a teacher in New Mexico, Michigan, Rhode Island and New York, the majority of them as a special education teacher, before retiring in 2009.

In an interview with Texas Tech Today in 2017, Crockett reflected on her time at Texas Tech and how far the university has come in terms of diversity.