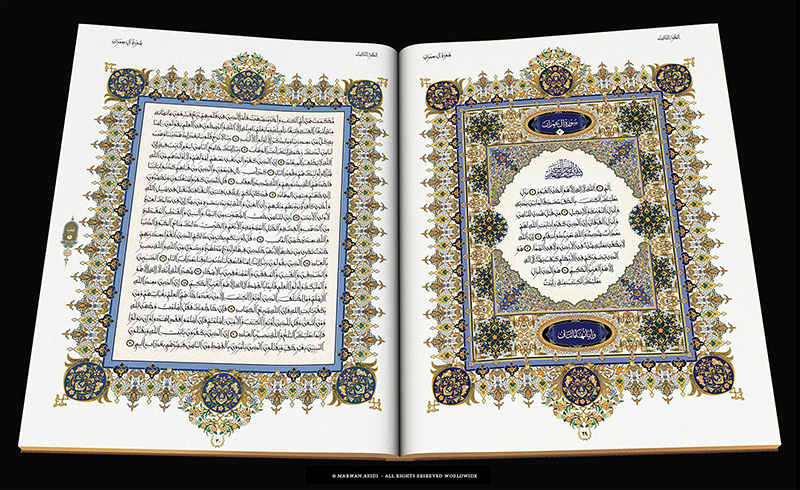 Marwan Aridi, the artist of the exhibition, will speak at the museum at 2 p.m. Saturday.

Drawing upon his talents as a calligrapher as well as his passion for Islamic ornamentation, international artist Marwan Aridi has created a Quran modern in its approach while preserving the integrity of its historical traditions.

Selections of this work, titled "The Holy Quran Pursuit," are now on display at the Museum of Texas Tech University. The exhibition will run through April in the Balcony Gallery.

Aridi will speak at 2 p.m. Saturday (Jan. 19) in the museum's Helen DeVitt Jones Auditorium. He spent more than a decade developing the artistry and calligraphy of the Quran, which he compiled into a book. In his talk, he will share how he created and manually assembled the unique text and illustrated the design of each Surah, including more than 78,000 words.

"I singularly developed and created a different design for each Surah of the Quran," Aridi said. "Together, these 114 individual designs create an encyclopedia of Islamic decorations and design traditions embracing North African, Moorish, Andalusian, Persian and Turkish influences."

Aridi, a Lebanese-American, earned a bachelor's degree in graphic design in 1980 from West Texas A&M University in Canyon and a master's degree in art from Texas Tech. In 1992, he founded Aridi Computer Graphics, a Dallas-based software company that specializes in fonts, drawings and ornament production.

"The Holy Quran Pursuit" exhibition is one of three on display at the museum that focuses on the Bible and the Quran. The museum also is hosting the "Pre-Modern Bibles: From the Dead Sea Scrolls to the Complutensian Polyglot Bible" exhibition, as well as the "Sandow Birk: American Quran" exhibition.

"Hosting the three exhibits allows the Museum to engage audiences simultaneously with these two extraordinarily powerful and influential books," said Gary Morgan, executive director of the museum. "Most people in West Texas know the Bible very well. Far fewer people know anything at all about the Quran. Its place in Islam is akin to that of the Bible in Christianity. The two great books have much in common, and there are strong overlaps in the narratives of their chapters."