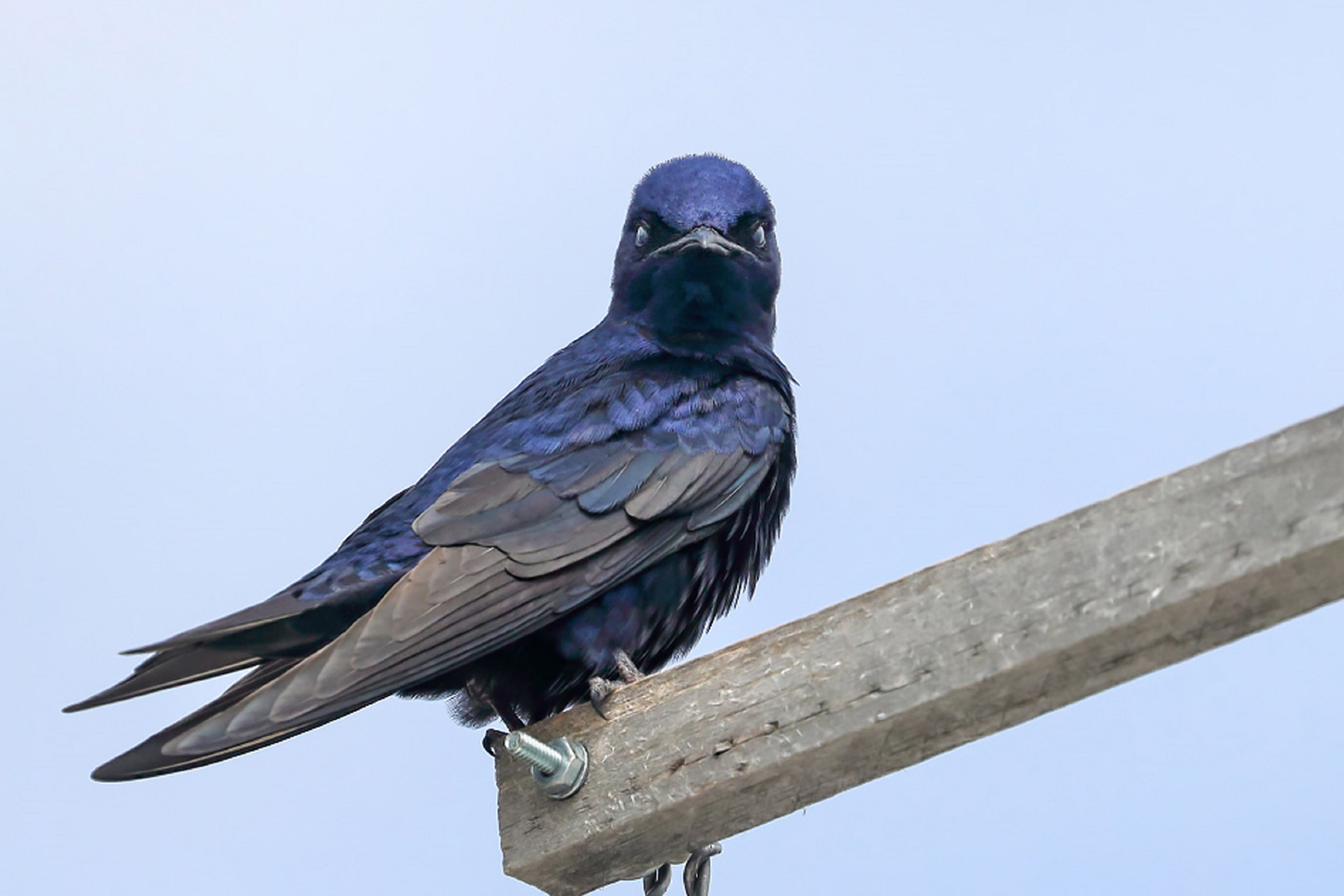 Research by Texas Tech experts helped determine the factors that lead to better survival by the birds.

North America's largest swallow, the Purple Martin, is experiencing significant declines across many parts of the nation. The eastern subspecies is now entirely dependent on humans for nesting cavities, and a typical colony site consists of multi-cavity birdhouses and clusters of hollow artificial or natural gourds.

Now, researchers at Texas Tech University have quantified the importance of managed housing that humans provide to the subspecies.

Data from the Purple Martin Conservation Association's (PMCA) Project MartinWatch found managed artificial housing of any type is beneficial and strongly encouraged for the conservation of eastern Purple Martins.

Critical factors affecting nest survival for the martins are the number of eggs laid in a single brood by a nesting pair of birds, age of the parents and the region where the nest occurred. Project MartinWatch is one of the longest-running citizen science data sets collected on migratory birds. The PMCA is represented among the five co-authors of the new publication, led by Joe Siegrist, chief biologist and president of the PMCA.

"This research underscores the importance of those dedicated individuals who provide housing for uniquely human-reliant species," Siegrist said. "Caring for the birds and collecting citizen science data is a labor of love for them. Their work is helping us better understand the dynamics affecting this species' survival."

Blake Grisham, an assistant professor with Texas Tech's Department of Natural Resources Management in the College of Agricultural Sciences & Natural Resources, and Jim Ray, the wildlife biologist for Consolidated Nuclear Security, LLC, contractor for the U.S. Department of Energy/National Nuclear Security Administration's Pantex Plant near Amarillo, turned to one of Texas Tech's graduate fish and wildlife population modeling classes, which condensed data, created models and entered data into a modeling software to answer what factors impacted egg survival during nesting.

Results of the semester-long project appear in this month's issue of the Wildlife Society Bulletin, titled "Nest Survival Data Confirms Managed Housing is an Important Component to the Conservation of the Eastern Purple Martin."

For each nest, landlords – or humans who provide specialized housing for the martins – collected a variety of data on housing and nest contents that were entered in what is known as the Project Martin Watch datasheet.

"We emphasize the importance of educating younger generations about the benefit of managed housing for Purple Martins," Grisham said. "The majority of the landlords in this study were over 56 years of age, and being proactive and having younger landlords across the distribution of the eastern Purple Martin will continue to benefit this species."

Among the information used was housing and entrance hole data, parent age, first egg date and final clutch size as potential factors that could affect the probability of an egg and chick surviving the nesting season, respectively.

Grisham pointed out two regions with the highest nest survival rates were south and southeast regions, even though Purple Martins in these regions are experiencing alarming declines in populations. The results mean managed housing provided by landlords is helping the species by providing a safe place to lay and hatch eggs, he said.

Looking ahead, Grisham said it's important to clean out Purple Martin cavities after the chicks fledge, prep the nest cavities accordingly before the Purple Martins arrive in spring, and most importantly, remove any unwanted invasive species, such as European Starlings and House Sparrows.

"It was just amazing to me to watch a class of young, aspiring wildlife biologists take a dataset and a few ideas, see a study design and analyses through, then ultimately contribute to a product in the scientific literature that has been deemed valuable to the conservation of this declining songbird," Ray said. "Let's not forget that citizen scientists care for the entire population of the eastern subspecies and contributed the data used in this important study."

Ray has close and long-term ties to Texas Tech. He received a bachelor's degree in range management in 1987 and was tapped for a CASNR Distinguished Alumni Award last year. The award honors graduates who've made significant contributions to society, and whose accomplishments and careers have brought distinction to the college and to the professions associated with agriculture and natural resources.