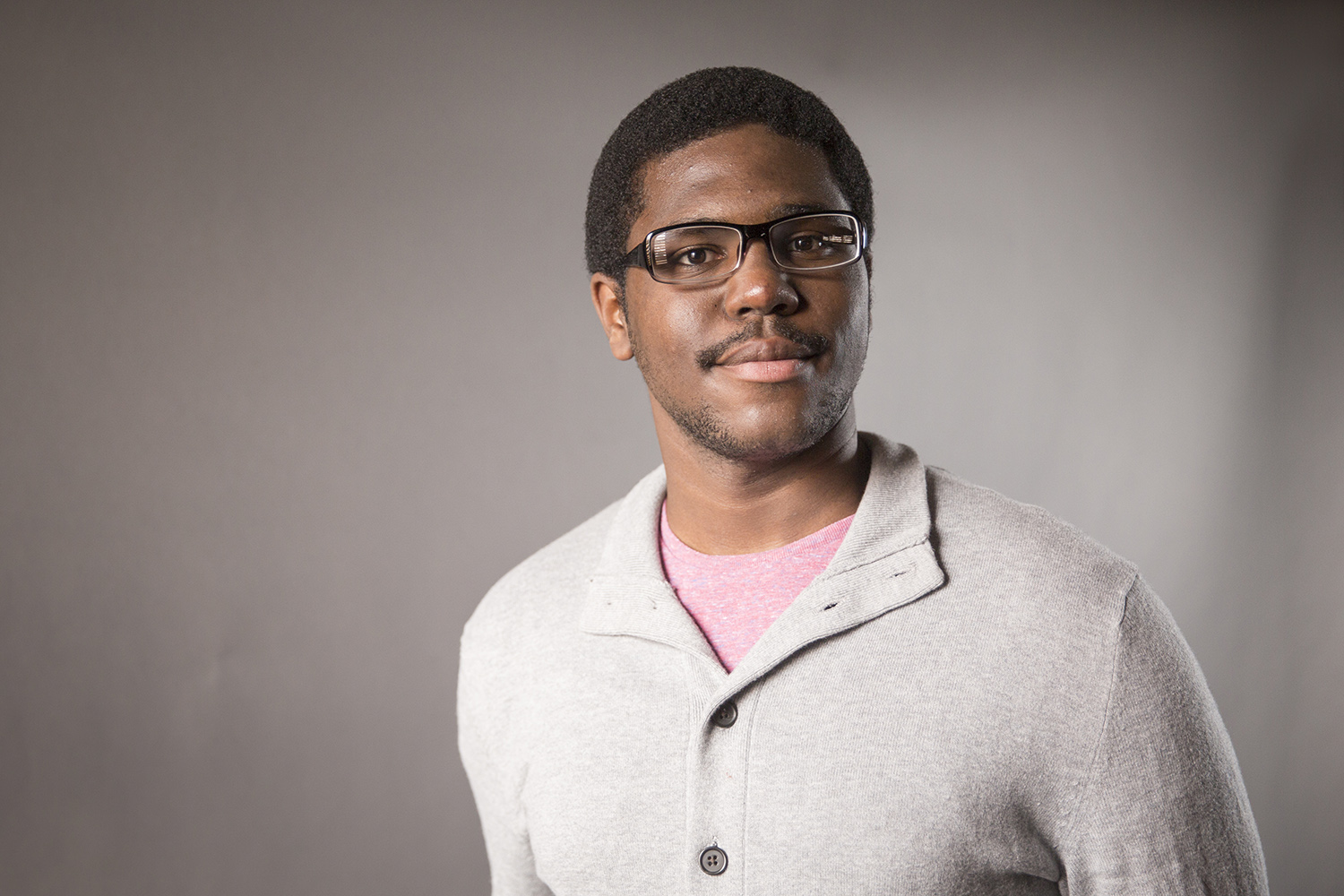 ScholarMatch acknowledges university’s strength with a spot on its honor roll.

Malik Williams realized when he was still young, yet more worldly than he probably should have been, that he would have to take a giant leap of faith in life to escape the circumstances around him.

Growing up in poverty in north San Antonio -- to the degree that he wasn't always sure where his next meal would come from or sometimes when -- Williams knew he had to find a way out. The most promising path was through a college education, and that was where Williams directed his focus.

Williams is halfway down that path, a junior at Texas Tech University majoring in political science with a double minor in legal studies and communications studies.

His goal after he earns a bachelor's degree is law school at an Ivy League school.

"I grew up in a ghetto with guns, drugs and gangs," Williams said. "Every night, you'd hear guns shooting and then the next day hear that somebody had been killed. Coming to Texas Tech, this is a world apart from what I grew up with.

For Williams' unique journey from where he was to now, Texas Tech had to fill an important role. And because the university has been so helpful for students like Williams – from low-income families with diverse backgrounds and first-generation college students – ScholarMatch recently placed Texas Tech on its 2018 College Honor Roll.

ScholarMatch is a company that targets low-income and under-represented students at key points along their college journey, with two primary goals:

Every academic year, ScholarMatch uses data and information from the U.S. Department of Education's College Scorecard to analyze 1,400 colleges and universities in four key areas in regard to low-income students: Financial aid, academics, student support and post-grad affordability.

Schools are scored on a scale of 1-4 in each area and the overall score is an average of the four categories. A score of 2 is considered average, a score of 3 is very good and 4 is exceptional. In 2018, Texas Tech checked in with a score of 3.1 to earn a spot in a group of 375 schools that made the ScholarMatch honor roll.

"As a state institution, what we're trying to do is provide access and opportunities for all students, but especially for those who need extra assistance with the matriculation process to get to college," said Jason Hale, director of recruitment in the Office of Undergraduate Admissions. "It's great to be recognized for those efforts."

While national recognition is a nice side effect of Texas Tech's commitment to underprivileged students, the true rewards are manifested in students like Williams.

Nearly every hurdle imaginable popped up in Williams' path while he worked his way through tough circumstances.

"I never met my dad," he said matter-of-factly. "My mom raised three kids by herself, but she never really held a job. Government assistance was basically how we survived, and that was pretty tough. It wasn't an easy way to grow up.

"When it comes to low socioeconomic students and first-gen minorities like me, there haven't traditionally been many opportunities set aside for us. That could be discouraging, but I didn't want to give up. I have high aspirations for myself. I don't want to wind up where the rest of my family has. I needed to get away and expand my horizons, so I knew when I saw the right opportunity, I was going to take that leap and run right into it. I needed to see what was out in the world."

During his years at Thomas Edison High School, Williams was a model student as he worked toward the goal of going to college. To avoid the distractions and pitfalls many of his peers stumbled on, Williams immersed himself socially into anything he could find – theater, robotics, debate.

A strong academic track record encouraged Williams to apply to some of the toughest, most prestigious academic schools in the country, as well as strong in-state programs like Texas Tech and Texas A&M University.

During Williams' senior year as his aspirations began to realistically materialize, he met two counselors from Texas Tech at a college night who represented the university's First Generation Transition & Mentoring Programs.

If Williams was still sitting on the fence about his college choice – he had been accepted to Rice University, Trinity University, Texas A&M and Texas Tech and was on the wait list at Brown University – that meeting provided some life-altering clarity.

"Right then that day, I had a gut feeling to come to Texas Tech," Williams said. "No other institution made me feel the same in my body. It was like Texas Tech was calling for me to come here.

"The Texas Tech reps came in and spoke, and then we sat down and talked about what the school had to offer, and I was sold. Both of them had similar stories to mine."

A difficult decision made – Williams said he passed up what would have been nearly a full education at Texas A&M to attend Texas Tech – his life-changing journey began in the summer of 2016.

With the assistance of Texas Tech officials, Williams scoured financial-aid opportunities and applied for whatever scholarships, grants and loans he could find to figure out a way to make ends meet.

Not long after he got to campus and got settled in, Williams realized his funds were still a little short and that he didn't initially have money to cover the costs of his textbooks. A group led by Patrick Byrne, section coordinator of the First Gen program, stepped up and found a way to make sure Williams had the tools he needed.

"Malik exemplifies the meaning of being driven and determined," Byrne said. "From the first few meetings we had, Malik made it clear that he was going to take full advantage of all the resources and opportunities provided to him by First Gen. Over the last few years, Malik and I have built a strong connection. He teaches me more than he will ever know. I have been lucky to know him as a student and person."

Williams calls Byrne one of his most important mentors.

"I met with some people I met when I first got to campus, and when they found out I couldn't pay for my books, they put their heads together and said, 'What are we going to do to help him?'" Williams said. "They were amazing and found a way to get me my books that first semester and have helped me ever since. It was incredible to me that they cared enough to figure out a way so I could stay here. Those are the people and memories I am never going to forget."

That final hurdle cleared, Williams immersed himself into college life and hasn't slowed down since.

Much like he did in high school, the personable Williams joined multiple organizations, including the First Gen program that helped pave his way to Texas Tech. Vicki West, managing director of Institutional Research, estimates that 21 percent of Texas Tech's new freshmen are first-generation college students each year, so Williams had a sizable social network to connect with.

At the forefront of Williams' immersion into college life was the First Gen program.

"The First Gen program felt like friends I had known all my life," Williams said.
"Honestly, those people became my family here."

A place to call home

Because of those relationships, Texas Tech has become home for Williams.

In part because Williams has never gotten a driver's license, he is a throwback college student of sorts. Most of his world is very attached to campus, with a bike as his primary mode of transportation. He is in his third year living in on-campus housing, a situation that has turned into another benefit.

After two years as a resident, Williams is now a Community Advisor at Stangel-Murdough, which means free housing and a free meal plan.

"Those two things have saved me so much money," Williams said. "This year is the first time I have actually been able to relax a little bit and not stress out about how I was going to be able to pay for everything."

The stress of a college student is something a lot of young people who grew up in Williams' circumstances might never have a chance to encounter.

Thanks to a caring community at Texas Tech, especially a core group that focuses on students who need help most, Williams is a college student on the path he carved out so many years ago.

"I have very high aspirations for my life, and Texas Tech has helped me every step of the way to pursue those goals," Williams said.

"From where I grew up and where I am now, Texas Tech has been a huge building block for my future. Getting help from people before I ever got here eliminated so many hurdles. The people here are so genuine and there are so many opportunities here. I don't think if I had chosen anywhere else that I would be where I am right now as a person and with the future I have ahead of me."