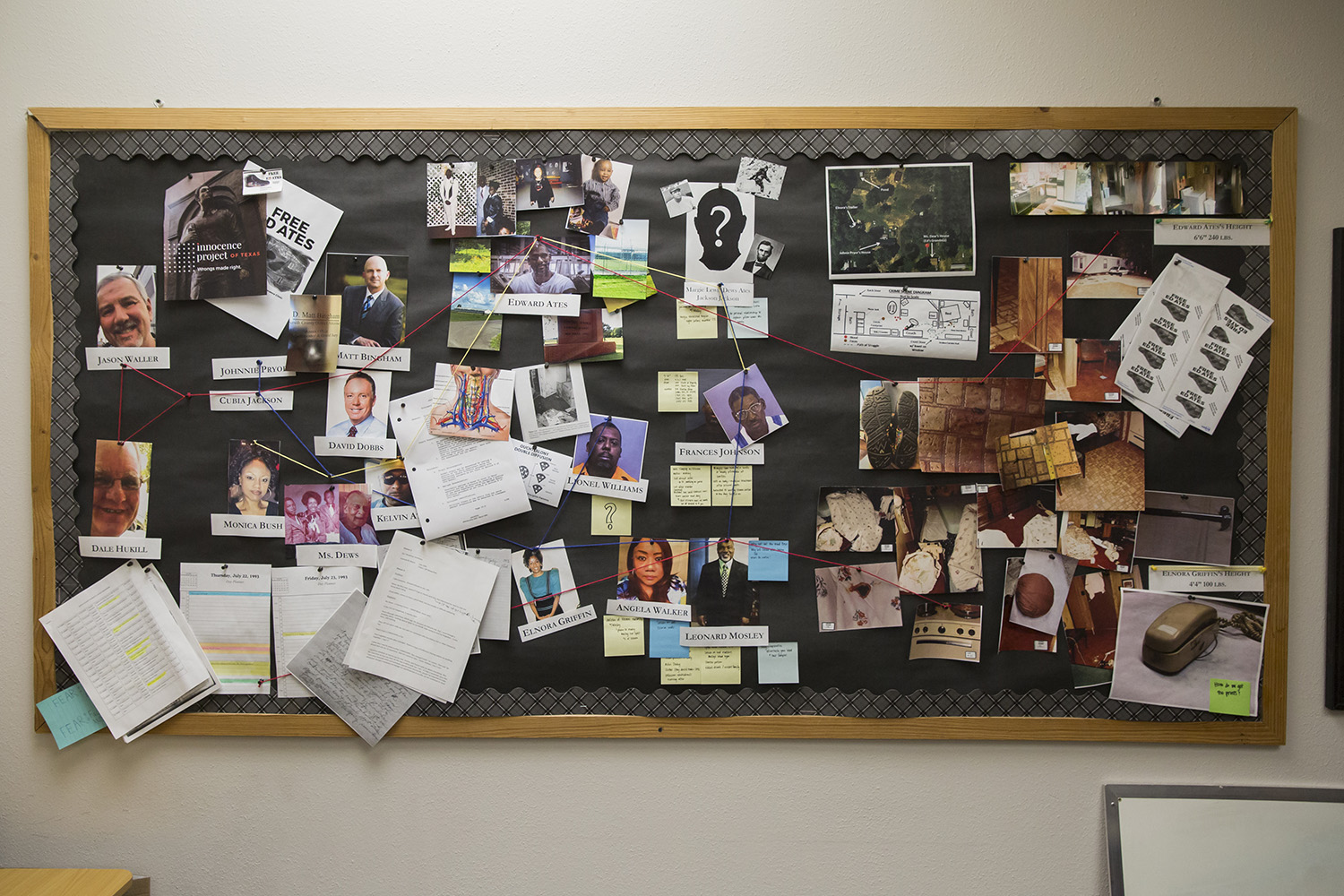 Allison Clayton and her students are continuing to work toward the exoneration of Edward Ates after helping secure his release after 20 years behind bars.

Edward Ates walked out of the Walls Unit of the Texas Department of Criminal Justice in Huntsville on Sept. 5, greeted by his wife Kim and two adult children, Kyra and Zach. It was the first time he had seen the outside since entering the Coffield Unit near Palestine 20 years ago, earning parole of a 99-year sentence for a murder conviction that appears to, potentially, have been reached on flimsy and inconclusive evidence.

A few days later, at the Ates' home in Dallas, friends and family held a welcome-home barbecue for Ates, whose case was thrust into the spotlight after being featured on the Truth & Justice podcast. Ates has received almost $35,000 raised by podcast listeners in a GoFundMe account and a donated pickup truck and, at age 50, started the path to put his life back together.

At both places were Lubbock attorney and Texas Tech University School of Law  Innocence Clinic director Allison Clayton and her students who worked tirelessly the last few years to not only get Ates out on parole, but also continued to push for his complete exoneration of killing a neighbor in East Texas in 1996. Without the work of the Innocence Clinic at Texas Tech, it's conceivable Ates might still be behind bars.

"For anyone who ever meets with Ed, it is immediately apparent that there is not a killer in this man," Clayton said. "You don't need a lot of experience in the criminal justice system to know within minutes that this guy is innocent."

Earning parole is just the first step, and a long, hard journey awaits Ates to obtain exoneration of a crime he has contended since day one that he never committed. Going back and doing DNA testing on 20-year-old evidence can be difficult, and disproving evidence that led to the conviction is challenging.

Clayton and the students involved with the Innocence Clinic at Texas Tech, who must perform all this work in addition to other Innocence Clinic cases and their regular law school course work, have no intention of being deterred.

"My goal is to get Ed Ates exonerated," said third-year law student Megan Soliz. "Will that happen during my tenure here? Probably not. The court system moves at a sloth-like pace. However, I can help start the process and hopefully see him exonerated one day."

Ates was a 19-year-old in 1993 who bore a resemblance to famed basketball star Michael Jordan and was set to attend the University of Oklahoma on a basketball scholarship.

He lived in a small, wooded neighborhood in the Smith County community of Chapel Hill, east of Tyler, with his grandmother, two doors down from 47-year-old Elnora Griffin. In between their two houses lived Griffin's cousin. On the night of July 23, Griffin's cousin found Elnora Griffin dead in her trailer, her 4-foot, 4-inch, 100-pound body lying face down with a six-inch stab wound to the bone of her neck in addition to numerous cuts, bruises, and scratches that indicated a struggle.

There was blood all over her trailer as well as what smelled like feces, including a smeared spot on the kitchen floor. Of all the physical evidence collected at the crime scene, there was not one drop of Ates' blood, not one strand of hair, not one fingerprint, nothing that physically tied him to the scene of the crime.

Upon interviewing Ates, investigators asked for his shoes and noticed what appeared to be a small amount of fecal matter on the bottom. Coupled with some irregularities in Ates' alibi and with testimony from another neighbor that a phone conversation with Griffin that night placed Ates in the trailer between 9:45 and 10:30 p.m., Ates became the prime suspect and was charged with Griffin's murder.

At his first trial, prosecutors theorized Ates stepped in the fecal matter when he murdered Griffin, used her car to drive to and from his girlfriend's house, and lied to cover his tracks. An FBI serologist testified the material from the bottom of Ates's shoe was human feces—conclusions that the FBI today recognizes are scientifically unsupportable.

His first trial in 1996 ended in a hung jury, so Ates was released from jail. Over the next three years, Ates married, moved to Dallas, and had a child and his wife, Kim. Kim was pregnant with their second child and Ates was working as a truck driver when he came up again for retrial.

At his retrial in 1998, all the evidence was the same, except this time prosecutors also presented a two-time felon and former cellmate of Ates, Kenny Snow. Snow testified that Ates paid him to lie and say another inmate had confessed to killing Griffin. Years later, Snow recanted that testimony, saying he lied to get favorable deals in his own cases. But the jury believed Snow at the time. They found Ates guilty and sentenced him to 99 years in prison.

Ates direct appeal was denied. When Snow recanted in 2010, Ates tried to use the recantation to get a new trial, but the court did not believe Snow (they found him to be a non-credible witness). The 2010 pleadings were Ates's last chance.

Or so he thought.

The power of podcasts

In 2015 Bob Ruff, a fan of the popular Serial podcast, started his own podcast called Truth & Justice. His podcast grew so quickly that he quit his day job as a firefighter in Michigan and devoted all his time to espousing theories about certain cases of likely wrongful convictions.

But he wanted to actually investigate cases that may have put innocent people in jail. One of his listeners mentioned a relative who was in prison for a crime he claims he did not commit. That person was a relative of Kenny Snow, the informant whose confession had helped convict Ates. In speaking with Ruff, Snow confessed that he had lied against Ates and had helped send an innocent man to prison. At Snow's encouragement, Ruff dove headlong into Ates's case. He reached out to Ates and interviewed him for his podcast.

Ruff continued to investigate Ates's case on his podcast to the point that he eventually reached out to Innocence Project of Texas executive director, Mike Ware. Ruff made copies of all trial transcripts and exhibits as well as crime scene photos to give to Ware while also letting listeners on his podcast know about all the evidence he gathered.

"When I asked for the evidence, the police department gave me the runaround for months and months," Clayton said. "I kept asking for the evidence catalog, and they continued to refuse. They even told me all the evidence was destroyed, which is against the law. So I asked them to sign a document saying they had destroyed the evidence and that I would let the Attorney General know what they had done. Within an hour, four boxes of evidence were found."

The Smith County District Attorney's Office later agreed to DNA testing of several items from those boxes. That DNA testing was funded in large part by donations of Truth & Justice listeners.

"Our clinic came in house at the law school in the Fall of 2016, and this case was our big case. It was our point of reference whenever I would talk to students about other cases."

Clayton and the Innocence Clinic students traveled to Smith County and poured over the evidence. The more they searched the evidence, the more they became convinced of Ates's innocence, and soon they became laser-focused on earning his release on parole and his eventual exoneration.

"The big problem toward getting Ed out is that one of the main requirements for earning parole in the state of Texas is admitting responsibility," Clayton said. "Ed would not do it. He had always maintained his innocence, even refusing to take a plea offer at trial. He would not say he had done something when he hadn't."

Clayton knew that a key to getting Ates out on parole was convincing with the three voting members on the parole board that Ed was worthy of release even without admitting guilt—a nearly impossible feat. She didn't have any experience with parole law or the parole board. So she reached out to parole attorney Roger Nichols of Austin for help. Nichols and Clayton pled Ates's case to two parole board members, telling them to sit across from Ates in prison, look into his eyes, and see his innocence for themselves.

It apparently worked. Ates was approved for parole this past spring and walked out of the Walls Unit a few months later, without having to admit responsibility for the crime.

For Clayton and the students in the Innocence Clinic at Texas Tech, seeing Ed Ates walk out of prison on parole was a significant moment. But their work to have his conviction overturned continues, with the goal of making him a truly free man.

It can be tedious. It can be frustrating at times. And none of it absolutely guarantees Ates will earn a complete exoneration of his crime. Re-testing DNA evidence could be inconclusive.

"Legal and procedural roadblocks continuously pop up in the appellate process," said Innocence Clinic at Texas Tech third-year law student Stephen Grant. "It can be frustrating at times to see the road to exoneration move at a glacial speed, but as time moves on, you realize how to best maneuver the system."

Clayton said the Innocence Project played a key role in helping the Texas Legislature pass a law targeting the use of junk science, or the use of invalid science to convict a person. She is hopeful that law will help get a reversal by invalidating the science used by the serologist on the supposed fecal matter taken from Ates's shoes.

Clayton also hopes to be able to run fingerprint testing on other evidence taken from the scene of the crime, including on a telephone found near Griffin's body that had been ripped from the wall and did not match fingerprints from Griffin, Ates, or Griffin's fiancé at the time.

Clayton is cautiously optimistic but knows nothing is for certain.

"We're still full steam ahead on his exoneration efforts," Clayton said. "We've got some really exciting things we've been doing inasmuch as his exoneration is concerned, and we're looking forward to the day Ed Ates is declared actually innocent."