Canine's Ability to Detect Explosive Mixtures Depends on Their Training 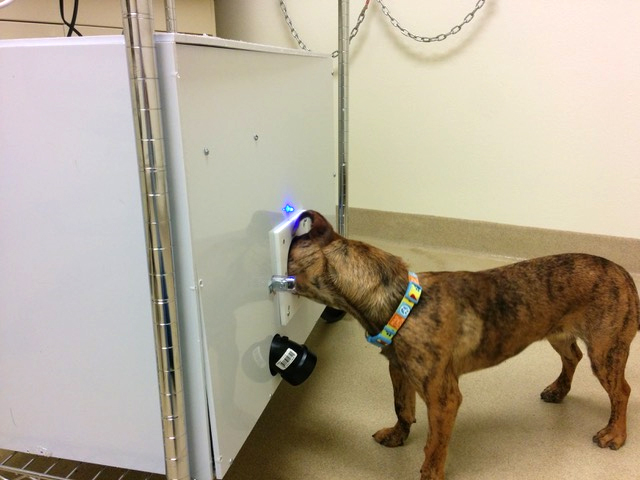 Texas Tech researcher Nathaniel Hall's work shows a dog's ability to detect the chemical mixture of explosive devices may depend on the methods used in teaching.

One of the most powerful yet underrated things on the planet is a dog's sense of smell. Fido's nose has become a tremendous weapon in detecting and distinguishing all different kinds of odors, from drugs to people to explosives.

But in an era when enemies of the U.S., both foreign and domestic, have developed homemade improvised explosive devices (IEDs), the abilities of explosive-detecting canines have been challenged. The chemicals used to make IEDs have evolved to the point that, sometimes, traditional explosive detection training techniques have become antiquated.

Does that mean that a dog's effectiveness in detecting explosives has been diminished? On the contrary, it just means that the training methods for canines to detect explosives have to evolve as well.

This is the conclusion of a research project recently completed by Texas Tech University assistant professor Nathaniel Hall in the Department of Animal & Food Sciences in the College of Agricultural Sciences & Natural Resources. The research, initiated while Hall was at Arizona State University working with Clive Wynne, showed that the ability of dogs to detect certain chemicals present in IEDs is related to whether that dog was trained to detect certain chemical components while eliminating others.

"Part of my position or my general philosophy is that abilities depend in part on what your training is," Hall said. "Whether you can do calculus or not depends on whether you've taken classes. I think a lot of what dogs can and can't do is not necessarily ability, but rather, did we give them the appropriate training. The answer is yes, they can detect these odors and they can do it quite well, if they've had the right training."

With homemade explosives, there is a litany of mixtures that people with nefarious intentions can use. The two main ingredients of an explosive are the fuel and the oxidizer.

The fuel can be anything that is combustible, but can also be a combination of chemicals that could include daily, household products, which have the potential to throw the dogs off the scent they are trained to detect. The oxidizer is a chemical required by the fuel to burn by causing other elements to lose electrons. The most common oxidizing agents are oxygen, hydrogen peroxide and halogens.

One of the most common oxidizers used in previous homemade explosives has been ammonium nitrate. This was the chemical Timothy McVeigh used to blow up the Alfred P. Murrah Federal Building in Oklahoma City in 1995. For the purpose of this research, Hall used hydrogen peroxide in addition to ammonium nitrate in order to mimic peroxide-based explosives. Peroxides are quite detectable due to the amount of residue that is left behind when making explosives, residue that is hard to avoid unless the bomb is being made in a lab where everything is purified.

Hall used a total of 13 different mixtures of chemicals and oxidizers controlled by an olfactometer created for the research.

Chemical mixture is just one aspect of the research. The second concerns how the dogs have been trained.

"One common theory is to train the dogs on the oxidizers and if we train them on that specific oxidizer, then they should be able to find it when it is mixed with other ingredients," Hall said. "The alternative theory is that we don't necessarily want them to find the oxidizer, we went them to find it mixed with different kinds of fuel sources. We want them to learn that it doesn't matter what it's mixed with, but if you find the oxidizer and any of these kinds of ingredients, those are the ones we need to be alerted to.

"But if the dog finds just sugar, or just coffee, all of that is just fine and we don't want the dog to alert to that."

The training methods reward dogs for detecting the oxidizer in a mixture as well as ignoring mixtures that don't. Through earning rewards, dogs learn what humans expect them to detect. The goal is to find which class of trained dogs are going to be the most accurate and most discriminating in detecting mixtures with or without the oxidizer.

The olfactometer creates an odor combination from 13 different sources and places that odor into a port where the dog can stick his snout. In that port are small photo sensors that can detect whether the dog's nose is inside and then presents the odor to the dog. If the odor created has the oxidizer in it, the dog is supposed to keep his nose in the port for at least three seconds as an alert to its presence. If the odor does not have an oxidizer, the dog is supposed to remove its nose as a sign of rejection.

If the dog identifies the odor correctly, whether it does or does not have an oxidizer, the olfactometer rewards the dog with an edible treat. Over the course of 25 days, the olfactometer conducted approximately 80 trials per day with the dogs.

"They were getting lots of trials, and that would have been wildly impractical to be doing the same thing every day," Hall said. "So this computer can mix them up within seconds, present the odor into the port and the dog can sniff it and we can go from there. It was all completely automated, so the dog would work a few trials, get some food, take a break, come back and work on some more trials, get some more food, and so on."

What Hall found was that it wasn't necessarily the type of mixture that determined whether the dog hit on it as a potential explosive, but rather how the dog was trained to detect explosives in the first place as to whether the dog correctly identified the mixture.

The dogs that had been originally trained to detect the oxidizer in a mixture performed as expected, meaning they hit on the mixtures they were supposed to and rejected the ones without an oxidizer as trained, regardless of whether or not the fuel changed. The interesting development came with the dogs trained to only detect the oxidizer.

Initially, when presented with mixtures containing the oxidizer, the oxidizer-only dogs did not detect it in the mixture. The number of correct hits, Hall said, was extremely low. However, after a few days of training and learning that if the odor smells a little bit like what he is trained for and he leaves his nose in the olfactometer long enough, the dog will be rewarded with a treat.

"So, across five days, the dogs that were trained on the pure oxidizer, after having five days of experience with mixtures, were able to make that jump and figure it out," Hall said. "This is something that is kind of familiar with odor mixture perception in general, about how different odors mixed together produce different smells. For the dogs, if you don't force them to try to make the separation of elements, they won't."

The results suggest Hall's original hypothesis was correct, that the dog's ability to detect a certain odor or mixture of odors depends on how it has been trained, and whether its training prepared the dog to detect that odor.

Hall said it's no different than how humans are programmed to recognize certain smells that trigger ideas of what could be producing that odor.

"A lot of the way you perceive things is going to vary a lot based off your experience and training," Hall said. "The more reward kind of learning you get, the better your perceptual systems are at detecting it. The dog is the same way. If you train a dog to detect something at a certain concentration. If you train a dog to detect a small amount of narcotics, then one day that dog is asked to find thousands of pounds of that narcotic, it's going to smell completely different because it's at a much higher concentration than what the dog is used to smelling.

"If you train the dog on a whole bunch of different concentrations so the dog knows if it smells something that is somewhat similar, it should probably go ahead and alert to that, and the dog is going to be more likely to generalize a wider range of concentrations."

Hall's project was funded by the Office of Naval Research, meaning that with U.S. servicemen in some areas under constant threats of IEDs, this could help them detect homemade devices quicker and easier and save lives.

While Hall's research shows that training a dog to detect mixtures produces a higher hit rate, the next step could be to train the dogs to sort through and detect different concentrations.

At the same time, he wants to continue to experiment with the mixtures to determine if different combinations produce different results.

"When you think about all the different permutations that influence canine performance, there is much left to study."