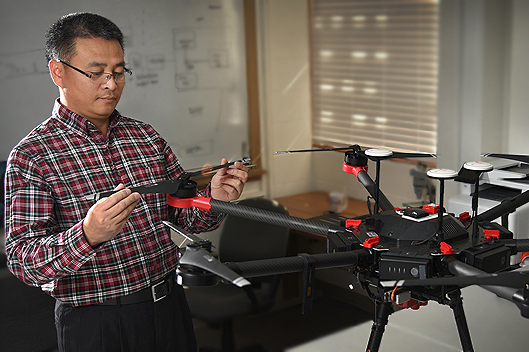 A Texas Tech researcher is using unmanned aerial vehicles to study the effects of variable-rate irrigation on cotton yields.

Fields of cotton, wheat, sorghum and other crops are common in the Texas High Plains, but what you might not expect is to see are unmanned aerial vehicles, or drones, whipping through the air above these fields.

If you drive out to a field of cotton about 30 miles north of Texas Tech University, that is exactly what you might see.

Wenxuan Guo, an assistant professor in crop ecophysiology and precision agriculture in Texas Tech's Department of Plant and Soil Science, a part of the College of Agricultural Sciences & Natural Resources, is using the drones to study the effects of variable rate irrigation in cotton yields.

“We know, in this area, water is the No. 1 limiting factor for agricultural production,” Guo said. “One of my top priorities for research is to use less water and get the same amount of production or use less water to have an optimized production.”

Guo came to Texas Tech in 2016, and has worked to discover methods of water conservation and efficient water use using precision agriculture technologies while still optimizing yields.

This led him to work with South Plains Precision Ag in Plainview. This company has a variable-rate irrigation system, which allows farmers to apply the right amount of water to their fields in the right area at the right time.

However, the current challenge in variable-rate irrigation in this area is knowing the timing, location and rate of water application to optimize production. Guo said solving this issue became the goal of his research.

Throughout 2017, Guo and his research team applied three different irrigation rates across a 480-acre cotton field to discover how the crop would respond at different landscape positions of the field.

Guo said studying the responsiveness of the different areas is where the drones played a key role.

The drones were equipped with various sensors, and Guo piloted them about 60 meters above the plant canopy. Through the sensors, Guo and his research team measured and identified the spatial variability for plant growth, as well as the soil moisture within the field.

Guo said they discovered variability in several agronomic factors that affected how well the crop responded to different amounts of irrigation. These factors included soil properties and topography – soil texture, organic matter, elevation and slope. Cotton yields responded well to irrigation in areas with flat land and fertile soils, but did not respond well to irrigation at areas with high slope and sandy soils.

Because of their varied responses to irrigation, agronomic factors were shown to affect yield potential in those different areas of the same field. By applying less irrigation to areas with high slope and sandy soils and areas without crops, farmers can use less water and get the same or a better return on their investments.

“Those factors all affect the water availability for plant growth and also the final yield,” Guo said. “If we adjust our allocation of irrigation water, matching the yield potential in the field, our water-use efficiency will be optimized.”

Guo said this research could prove beneficial for farmers who produce various types of crops. He said he knows many types of agricultural fields have a substantial amount of variation in soil properties and topography, and he recognizes this research could apply to other crops in the future.

Using precision agriculture technologies to identify and measure variability could lead farmers in the community to use less water and more sustainable agriculture in this region, Guo said.

“Based on this study, we can design a strategy to optimize the allocation of irrigation water in the field to save water or improve water use efficiency,” Guo said. “The result would be better profitability for the farmer.”