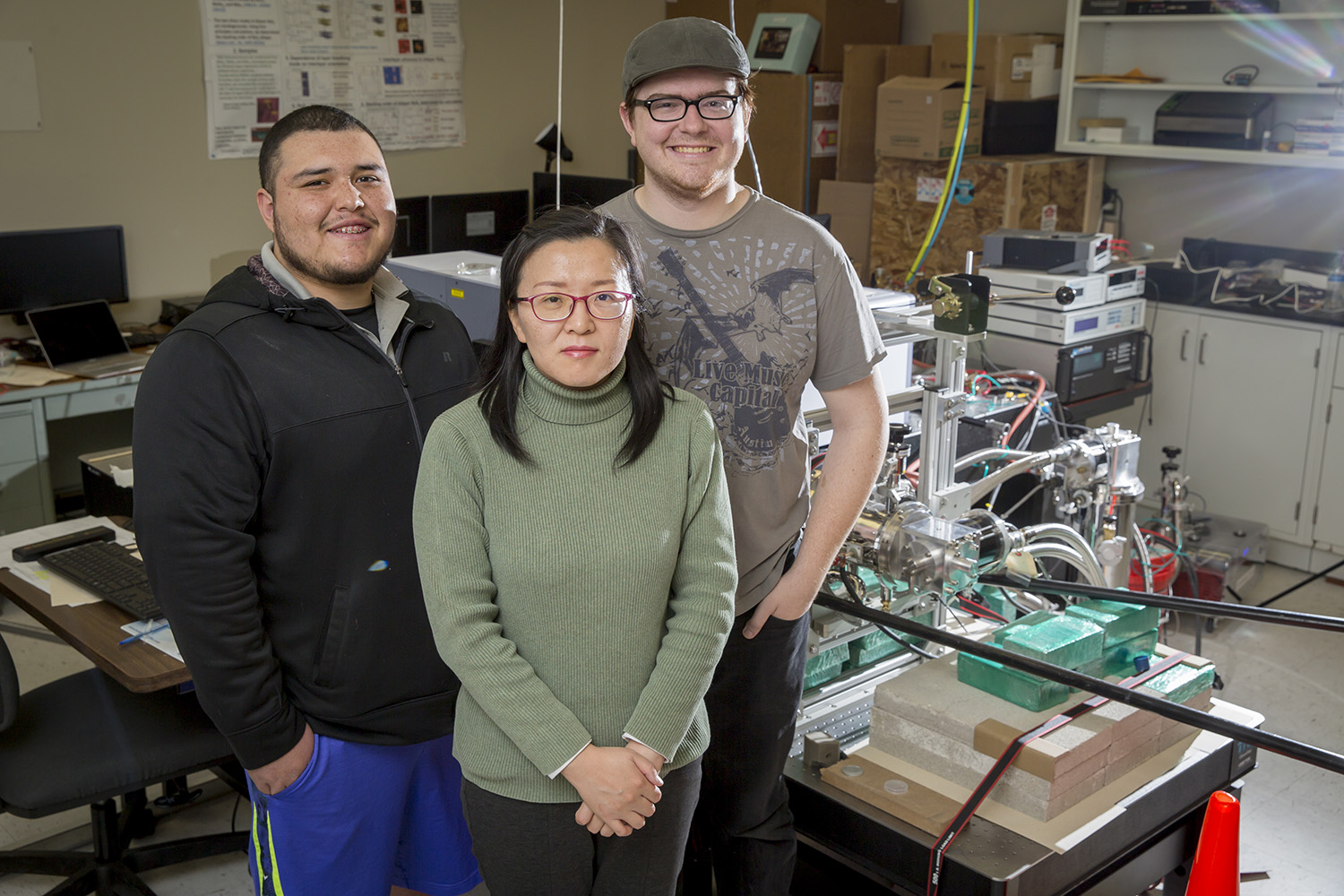 Their findings were published in Nature Communications.

The circle of death. It's every computer owner's worst nightmare. Who hasn't suffered from a painfully slow computer? And the internet isn't always to blame for the lag. Sometimes, it's the parts inside the machine that need an upgrade. Even though technology has advanced exponentially and computers run faster than ever, there's always room for improvement.

Texas Tech University's Rui He (pronounced "her"), an associate professor in the Department of Electrical & Computer Engineering in the Edward E. Whitacre Jr. College of Engineering, and her three undergraduate students, Fabian Diaz, Saad Siddiq and Eric Wauer, recently had their research findings published in the multidisciplinary journal Nature Communications.

"The research we published is to report our recent study on spin wave excitations in a ferromagnetic – a substance with high magnetic permeability – 2D material chromium triiodide," He said. "We discovered terahertz frequency spin waves, which are much higher in frequency than those in conventional ferromagnetic materials. This is going to open up new opportunities for making ultrafast spintronic devices – devices that use electrons' spins for realizing spin currents that are much faster than gigahertz spintronic devices and much more energy efficient than electronics currently on the market.

"Computers run with gigahertz processors, so if we can use the technology based on the new 2D ferromagnetic materials, then we may bring the processing up to run 100 times faster, or even more," He said. "Spintronics could also help reduce the heat from these devices and lower the power consumption."

Though the research is exciting, He recognizes it wouldn't have been possible without the participation of Diaz, Siddiq and Wauer, her undergraduate research assistants who also are co-authors on the paper.

"Their contributions really made our research possible because when we performed experiments, we needed multiple people to work around the clock," He said. "They really made the work possible. It was great to have them on the team."

"The learning experience was one of the great things I got out of this," said Diaz, a computer engineering major from Balmorhea who will graduate on Saturday (Dec. 15). "There was a very big learning curve we had to overcome. I feel like Eric, Saad and I did a good job because we helped Dr. He with whatever she needed, and we really came together as a team."

The Center for Transformative Undergraduate Experiences (TrUE) also hosts an undergraduate research conference where undergraduate students can share their knowledge and ingenuity through poster and oral presentations, artistic performances and visual art exhibits.

"I think it's important to involve undergraduate students in research and to let them join this field early in their life so they can know what goes into conducting a research project," He said. "I think it's a great educational opportunity for them."

Not only has He provided this experience for her students, but she's also given them something many undergraduate students don't have: their names listed as co-authors in a published paper.

"I don't think it's really hit me yet," said Wauer, a computer engineering major from Spicewood. "I haven't really thought, 'Wow, this actually is going to really improve the rest of my life from here on out, being in a publication this young.' It's cool to think I'm published now, but I can't really wrap my head around it."

Siddiq, an electrical engineering major from Calgary, Alberta, Canada, who graduated in August, was grateful for the experience he had working with He and her research team, which also included graduate student workers Pouyan Rezaie and Zhipeng Ye. Rezaie and Ye also are co-authors on the paper.

"Working under Dr. He's guidance and alongside Pouyan and Zhipeng was an enriching experience," Siddiq said. "Through this lab work, I was able to learn a lot about Raman spectroscopy, a realm I knew virtually nothing about going in, and am honored to be listed as a co-author on the paper."

Not only did Diaz, Siddiq and Wauer gain research experience while being paid by He's National Science Foundation CAREER grant for the research they did, but they also earned course credit. The lab work they did covered their senior project lab course (ECE 4333) requirement, which was taught by electrical and computer engineering professor Richard Gale.

As for the future, conducting this research has helped put things in perspective for Wauer, who will graduate in May.