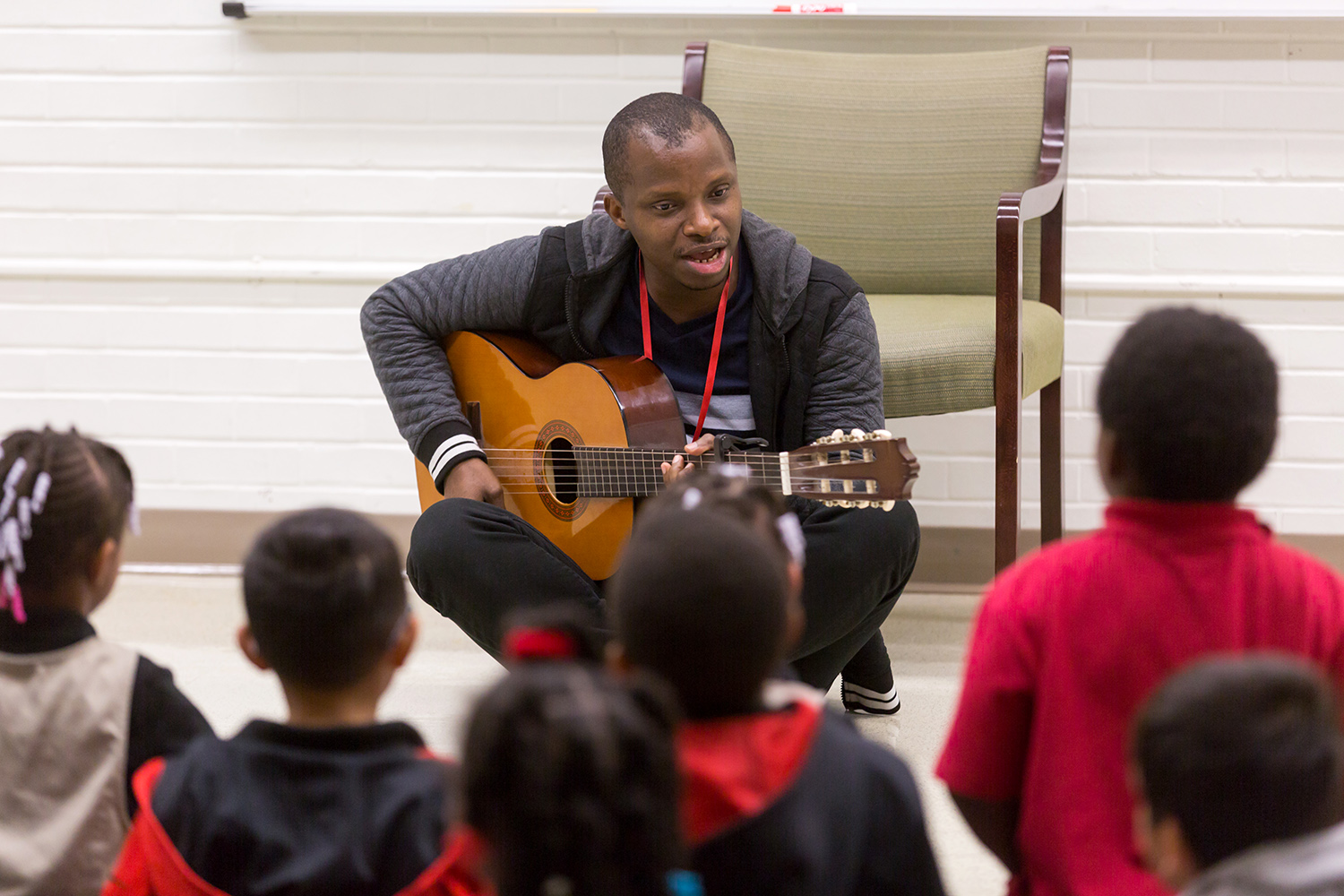 The students at Alderson Elementary came into the classroom in a rush after a full day of school.

Once they gathered on the floor of the music classroom for the after-school program and saw a guitar case, they knew they were in for a treat.

The teacher in the front of the room, Excel Haonga, had the students' attention immediately. Haonga quietly asked the students if they were ready for the class to begin.

With enthusiasm, the students began preparing for their concert later in the week, performing each song with energetic visuals and accompaniment with African drums.

In the fall of 2016, Haonga, a doctoral student in music education at Texas Tech University, became a research assistant with the East Lubbock Promise Neighborhood (ELPN) in music-based after-school programs at Alderson and Ervin Elementary.

Kenn Watt, collaboration coordinator for the J.T. & Margaret Talkington College of Visual & Performing Arts, said ELPN brings arts programming to schools in East Lubbock that need extra attention because they are part of an underserved community.

Watt said numerous studies show arts training can cause better behavior in schools and better relationships with teachers and peers, as well as an increased grade point average.

“For a lot of reasons, ELPN is an important mission for this university and the College of Visual & Performing Arts,” Watt said, “to partner with parts of the community where we can make a difference.”

Because of his research assistant title, Haonga said some people think he conducts research for the organization. That was also Haonga's original thought, when he first heard about the position.

“When they told me I would be working for them, I thought I would be engaging with a lot of research,” Haonga said. “But, it's quite different. Basically, my role is teaching.”

Watt said the research assistants get a unique opportunity to teach students in the local community.

“They get a certain kind of training in a difficult environment that refines their teaching skills and gives them experience teaching young students, many of whom who have not had exposure to the arts prior to us being there,” Watt said.

In his role, Haonga said he gets the chance to share music from Africa and from Tanzania, his home country, with the children. When Haonga first started, he was worried about teaching in a western classroom, even though he had experience back home.

Haonga said it was a challenge to interact with the students when he first started. He wondered what kind of approach would be best to help the students learn as much as they could from the class.

As he has taught in the program, Haonga has used different activities to keep the students engaged in the topics being covered. In a typical day, he said, the students practice the songs they will perform at the end of the semester, then participate in musical activities like rhythmic clapping or playing drums.

One of the activities Haonga started was inspired by what the students were composing while they were supposed to be warming up on the instruments.

“I remember one time when I gave them the chance to warm up, I was moving around,” Haonga said. “There were some students who were playing beautiful melodies. I thought, ‘These kids can do something,' and I thought I should let them come up with their own melody and their own song they would like to perform at the end of the semester.”

Haonga said the students are more engaged with the material when he gives them the opportunity to play musical instruments.

James Brock, site coordinator for ELPN at Ervin and Alderson elementaries, has seen the students' behavior change through the program. Brock thinks the program has helped students fall in love with music.

“It's important for everyone to be exposed to music,” Brock said. “I mean, I'm a musician as well. So, it's good they get exposure to different music that they might not normally get to hear.”

Watt said it is important for students from different cultures to see Haonga teach and share his life experiences with them.

“This is a community of marginalized populations,” Watt said. “They see Excel come in as a member of a marginalized population. There is probably an initial assumption that there is a similarity, an alignment of shared cultural background. Then, when they find out Excel is from a different cultural background, I can only imagine it must be very expanding for their cultural assumptions, their consciousness and their sense of themselves as world citizens.”

Coming from Tanzania, Haonga said the culture of the classroom is different in the United States. But, his biggest takeaway from this experience has been getting to know the students he is teaching, in whatever background they come from.

“To me, because our classroom setting has changed so much, we don't have one kind of culture within the class,” Haonga said. “We have so many people from different parts of the world, different ethnic groups, different languages and different backgrounds.”

Even though Haonga has taught in this after school program for three semesters, he said there are things he continues to improve while interacting with his students every week.

“Sometimes, you may think you know how to teach and that you have sufficient knowledge of how to do this,” Haonga said. “Then, you realize you have more stuff to learn and to improve.”

Haonga said he plans to take the knowledge he is gaining back to Tanzania and teach at the university level.

“I feel like, by having an opportunity to teach there and here, in a different setting and culture. It's adding something,” Haonga said. “Right now, I am observing other teachers and the way they teach and how they meet the needs of those students.”

Watt said Haonga has been an integral part of the success ELPN has had in the East Lubbock community. Watt hopes the community continues to buy into the program as a whole.

“What we want is for East Lubbock to see this program as an important part of their future, not a top-down imposition about what people in the ivory tower think would be most effective,” Watt said. “We want maximum community buy-in so that the ideas and the participation are driven by the local community itself.”

After one student performed in front of the class, he stood up, bowed and thanked the class for listening. Haonga's face glowed with joy and pride.