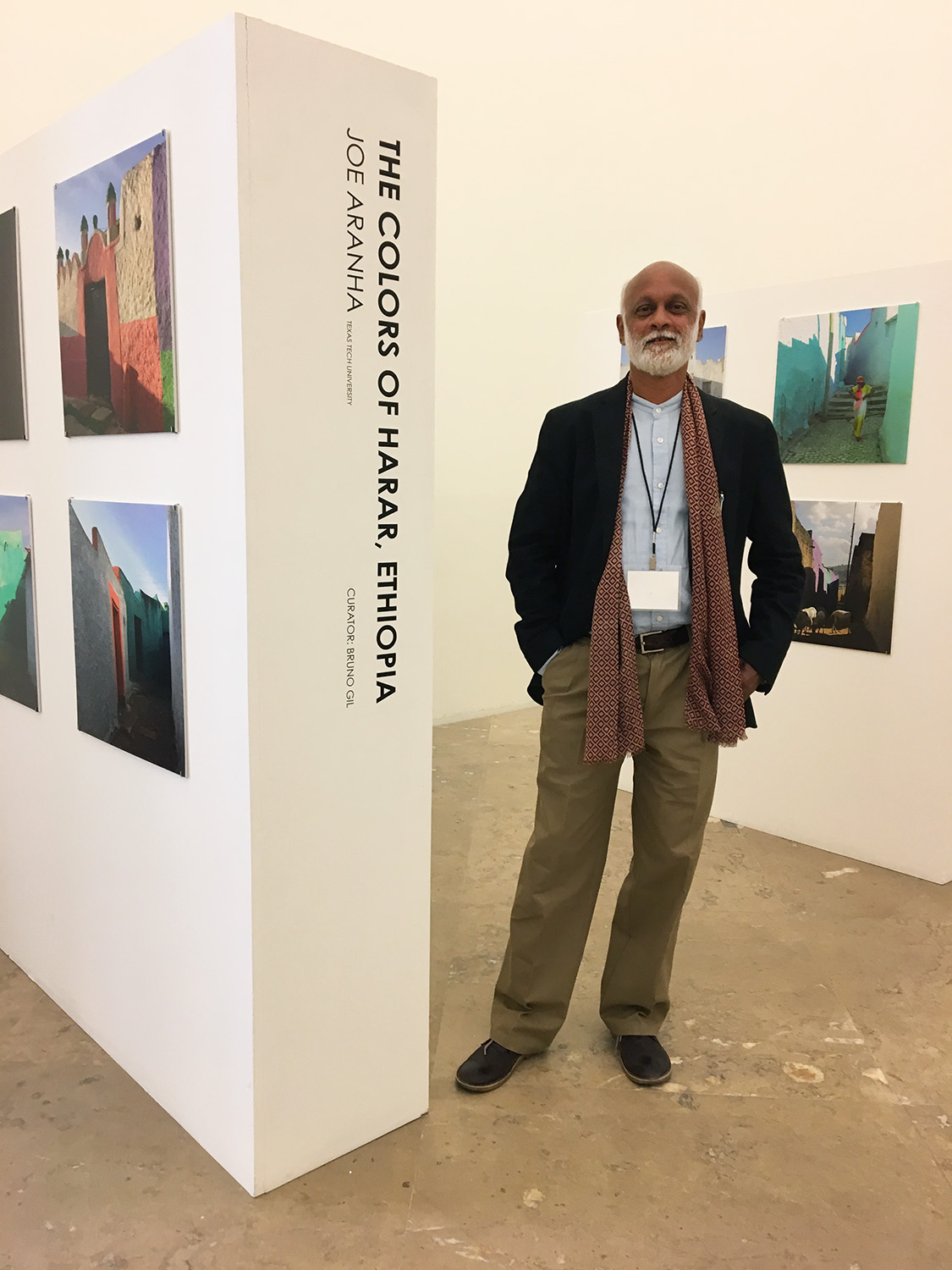 Joseph Aranha exhibited 16 photos at the 2018 International Association for the Study of Traditional Environments Conference.

Joseph Aranha, professor in the Texas Tech University College of Architecture, recently attended the 2018 International Association for the Study of Traditional Environments (IASTE) Conference hosted by the University of Coimbra in Coimbra, Portugal. The University of Coimbra is the oldest university in Portugal dating back to 1290. The conference was held in a 17th-century convent, which has now been converted into a convention and exhibition space.

The IASTE conference is hosted by renowned universities and held every two years in locations around the world that are rich in history architectural traditions and culture, such as Cairo, Egypt; Oxford, England; Tunis, Tunisia; Kuala Lumpur, Malaysia; and Dubai, United Arab Emirates, to name a few.

Aranha attended the IASTE conference to present a paper and also was invited to exhibit photographs he had taken from a recent visit to the walled town of Harar, Ethiopia. The exhibit was titled “Colors of Harar,” and was viewed by a variety of respected scholars, researchers and professors from more than 40 countries.

Aranha said he received many positive comments and feedback from various members of the conference. Aranha also had other photo exhibits on display at IASTE conferences in Bangkok, Thailand, (2006) and Beirut, Lebanon (2010).

“I'm not a professional photographer,” Aranha said. “I just use photographs as a device to talk about architecture.”

Aranha has been a member of IASTE since the second year of the inception of the organization. This past year marked the organization's 30th anniversary, and Aranha was awarded a plaque for his participation in all but one of its conferences as a paper presenter or sessions chair.

He has served on sessions committees for past conferences and as a regional editorial adviser for the IASTE scholarly journal Traditional Dwellings and Settlements Review, which is published through the University of California, Berkeley.

He said was attracted to IASTE because it involves studies of traditional environments by scholars from multiple disciplines.

“The focus of this organization is to bring together scholars from a variety of disciplines who are interested in the study of tradition in the built environment and how it is created, expressed, perpetuated or understood and how it is altered, invented, reinvented or terminated by forces of local and global change,” Aranha said.

The theme of this year's conference was “Politics of Tradition.” It was an appropriate theme for his photo exhibit, which was a visual essay about a newly emerging architectural tradition in Harar, a unique, Islamic, walled town in southeastern Ethiopia.

Aranha is one of several co-principals in a multidisciplinary team of Texas Tech professors engaged in a project funded by a one million Euro grant (about $1.2 million USD) from the German Agency for International Cooperation and administered by the British Council in Ethiopia.

Part of the project involves setting up graduate and doctoral programs for a group of four universities in Ethiopia, which allowed Aranha to travel to Ethiopia in 2017 to teach a graduate course. While there, he had an opportunity to visit Harar, the only town of its type in the Horn of Africa, which is why Aranha chose to visit.

“I didn't go there with the idea of doing a photo exhibit,” Aranha said. “I went to experience the traditional walled town and to study and understand its unique architectural characteristics. Over several days, I walked around trying to capture its various moods and architectural qualities of the mosques, houses, streets and open spaces in the dense town through photographs. It was only later on when I studied my photos that I got the idea of using them to curate an exhibit, or visual essay, that could document how the inhabitants of Harar created a new tradition and a local identity for themselves through the use of color.”

Traditionally, Harar was monochromatic because, when the town was founded in the 12th century, the buildings were built of stone and mud. Centuries later, the town fell into decline but underwent a revival in the early part of the 20th century. During this period, Indian merchants introduced the idea of whitewashing, and affluent citizens began to whitewash their houses.

This all changed about 20 years ago when residents began applying polychromatic paint to the walls of their houses and neighborhood mosques. Today, painting houses and mosques has become an annual tradition and is a part of cleansing their environment during the Muslim holy and fasting month of Ramadan.

“People have now started to discover the use of paint as a way to express their identity,” Aranha said. “Today, many of the families in Harar have relatives working outside the area, in the Middle East or other countries, and send money back to spend on their houses. The use of color has become a way of expressing their prosperity.”

In 2006, Harar was named a World Heritage City by the United Nations Educational, Scientific and Cultural Organization (UNESCO). This title is given to sites that are historically, culturally or architecturally significant to the world. Since acquiring this status, there has been developmental aid to repair, preserve and update the infrastructure and walls of the town.

“With the application of color to buildings, there is a natural concern about heritage conservation and architectural authenticity,” Aranha said. “However, to the residents of the city, the annual practice of applying colored paint to buildings is now a popular tradition, albeit a new one, that they are proud of. Tradition is not static and is affected from time to time in response to social, political, cultural and economic factors. The exhibit, while celebrating the visual exuberance of the town, was also a visual commentary in keeping with the theme of the conference.

“While the use of color is a new tradition that can be viewed as a growing desire for individual expression as well as community identity, it also serves the people of Harar, a minority and politically marginalized ethnic group, to bring greater visibility to themselves, their unique traditional Islamic town, and a new architectural spirit that places Harar, a once remote and almost forgotten city in Ethiopia, into the national spotlight.”

Aranha's photographs will be on display in January 2019 at Arquemi Estudio y Galería de Arquitectura, in Seville, located a few blocks away from the TTU Center in Sevilla, in Seville, Spain.