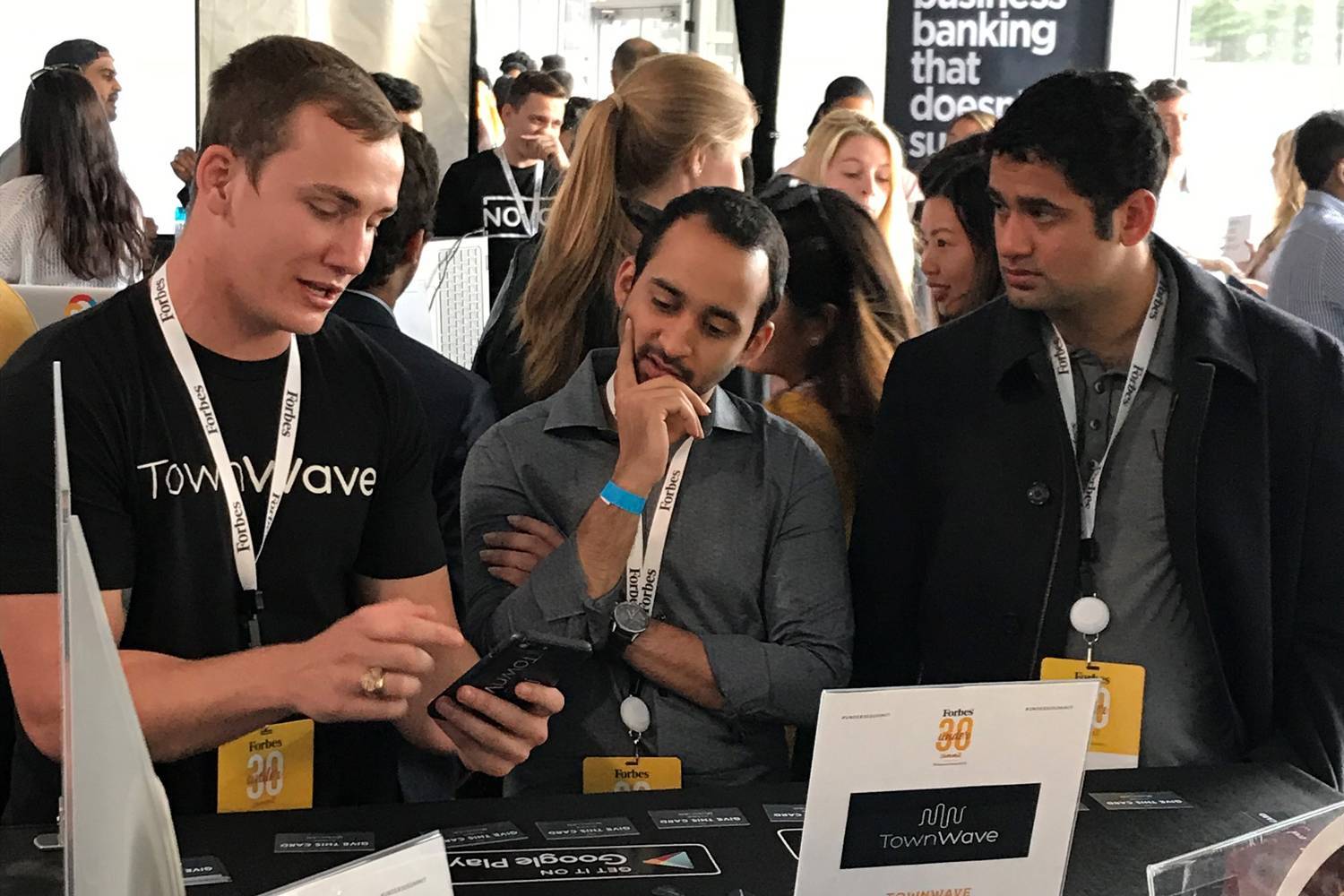 The TownWave app is available through the Apple App Store and Google Play.

It started with a simple Google search. OK, maybe not that simple.

After all, how many times does someone click on the search bar to find out what Hawaiian rappers sound like? But that's exactly what struck Texas Tech University College of Media & Communication graduate Dalton Dellsperger one day while sitting around his apartment.

An aspiring rapper himself during his early collegiate years, Dellsperger had been into music pretty much his whole life and had even found a way to turn music into some money in his pockets through live performances. But his real passion had always been giving young, up-and-coming artists the opportunities they need to succeed.

And that's where the Google search comes into play. Despite the vast array of music in the world, Dellsperger wasn't finding what he was looking for, and what he did find was outdated. He also discovered there weren't too many avenues available for the artists still struggling to make a name for themselves unless they had money or the backing of a record label, which he did not.

So, with the help of a couple of friends, Dellsperger formulated and developed the TownWave app and website, which are designed to give artists and musicians the ability to be discovered based on their location by uploading their own music to the website for others to hear. What makes TownWave different is it uses its own platform as opposed to other apps that compile information or trends from existing platforms such as Spotify or Soundcloud.

“I also was an independent musician who was learning as I was going, and I recognized that there were zero sound platforms that actually wanted to help my career and expand my fan base,” Dellsperger said. “There aren't a lot of websites or apps that are willing to create their own platform, their own community and their own movement.”

Assisted by fellow Texas Tech graduates Tyler Holden and Paul Valadez, the trio developed the TownWave app. Roughly 18 months later, their product has gone through several startup competitions that have drawn more interest, and in September, it was on display in Boston as part of the Forbes Under 30 Summit. That gave the group the opportunity to display their technology to thousands of entrepreneurs and industry professionals.

“It was a great experience because we were showing the app to people who weren't necessarily within our target demographic, and we received amazing feedback,” Dellsperger said. “Ninety-nine percent of the people we showed the app to loved the idea and downloaded it on the spot, or referred a musician friend they knew to join the platform.”

Not bad for something that started out as a concept written in a notebook.

Dellsperger remembers vividly how the idea for TownWave began to occupy his every thought, even causing his concentration to lapse during class or when he was supposed to be studying for a test. He admitted to feeling a bit like Bradley Cooper's character in the movie “Limitless,” constantly scribbling ideas for TownWave, but also not wanting to talk about it for fear that someone would steal his idea.

Eventually, he brought his idea to a friend. Holden, an industrial engineering graduate who earned his master's degree in August, and Dellsperger met in Weymouth Hall and began hosting live events and parties around Lubbock. Dellsperger said Holden was in a band in high school that had a record deal lined up, but turned it down to remain independent. Holden also is a web developer who started his own company, NextGen Code Company , while pursuing his master's degree.

With the help of other students, Dellsperger and Holden began working on the app development, but soon realized they needed help from someone who could develop the ability of the app to handle the immense amount of data for the platform. Through his connections in the Media Entrepreneurship & Innovations Group, a part of the Office of Research Commercialization, Dellsperger learned of a developer who could possibly help.

During this time, though, Dellsperger and Holden continued to pitch their idea and entered the 3-Day Startup hosted by Texas Tech's Innovation Hub at Research Park. It was there that the duo met the developer who had been recommended to them: Valadez.

After they pitched their idea, Valadez asked to become a third partner.

“It took us roughly a year and a half to develop the app to where it is today,” Dellsperger said. “We were all still in school, balancing work with the responsibility of being full-time students, so the initial development was slow and time-consuming.”

Originally, Dellsperger was reluctant to enter the 3-Day Startup competition for fear that someone would try to steal their idea and get a version out before they could. In the end, however, it worked out for the best as the group learned how to formulate a business model and pitch their product.

From there, the trio entered and placed second in the Lone Star Startup competition hosted by the College of Media & Communication. That earned them a $1,500 award to help further develop the app. Last year, they were chosen to compete in the Student Startup Madness event, a nationwide event that brings together entrepreneurs and innovators, and held a launch party for the website and app at South by Southwest in Austin.

The Texas Tech team reached the final 64 of the Student Startup Madness before being eliminated, but in that time, the app also became available in the Apple App Store and Google Play.

Perhaps their biggest break came last month when they participated in the Forbes Under 30 Summit, which brings together leaders, policy-makers and entrepreneurs to present their innovative solutions to the world's most pressing issues.

Part of the mission for TownWave was to find investors who liked the project so much they would sign on to it. It worked, as the TownWave app, the only music-based startup at the event, drew a lot of interest. Dellsperger even turned down a job offer from the summit

“I would have killed for it in May 2017 when I was applying for numerous jobs,” Dellsperger said. “There were quite a few venture capitalists and investment firms in attendance, and we got to network with individuals who potentially could bring our company to the next level. We are currently in the process of communicating with all the people we met at the event, and it was a great experience in general. Plus, we got to hear successful professionals speak on their journeys and what they encourage other young individuals to do, so that was a plus.”

Having experienced the Forbes summit, Dellsperger said his group's eyes were opened about the possibilities for not only this idea, but also for others they might have and how to go about fulfilling them.

“We all went through the curriculum of learning how to be a great employee and networking your way to the company of your dreams,” Dellsperger said. “But by chasing this entrepreneur path, we really started to understand how you can take any idea you have and bring it to life. Then, from there, you can change the world with what started as just one idea.”

The summit also allowed Dellsperger, Holden and Valadez to connect with music industry professionals, musicians and others in the business to better understand their perspectives and what they would look for from the app. They also attend live shows and showcases to speak with musicians to understand how they can help make that community better.

“If we didn't have an app to represent or an idea to promote, it would be harder to host these conversations,” Dellsperger said. “People respect the innovators and the ones who are willing to go against the grain of the world. They love to root for the underdog and it has helped us have confidence in our team and our product.”

Dellsperger also has taken to working in management and consultation with artists, helping them book shows, market and promote their music and develop their brand. He calls it the beta test of what they hope TownWave will eventually become.

Eventually, Dellsperger wants TownWave to become the one-stop shop for everything an independent musician needs, from booking shows to getting more plays to designing a T-shirt. His goal is for TownWave to become the biggest underground sound community for independent musicians and to give artists the tools necessary to promote their music worldwide.

“All in all, we're just trying to help more artists succeed,” Dellsperger said. “Our nest goal is to secure an investment, that way we can all work on it full-time and hire more employees. TownWave is here to help musicians create their own wave rather than riding the waves made by others.”

The app is available for free, and it also is free to listen to music or for musicians to upload music to the platform. For more information on the app, go to its website.