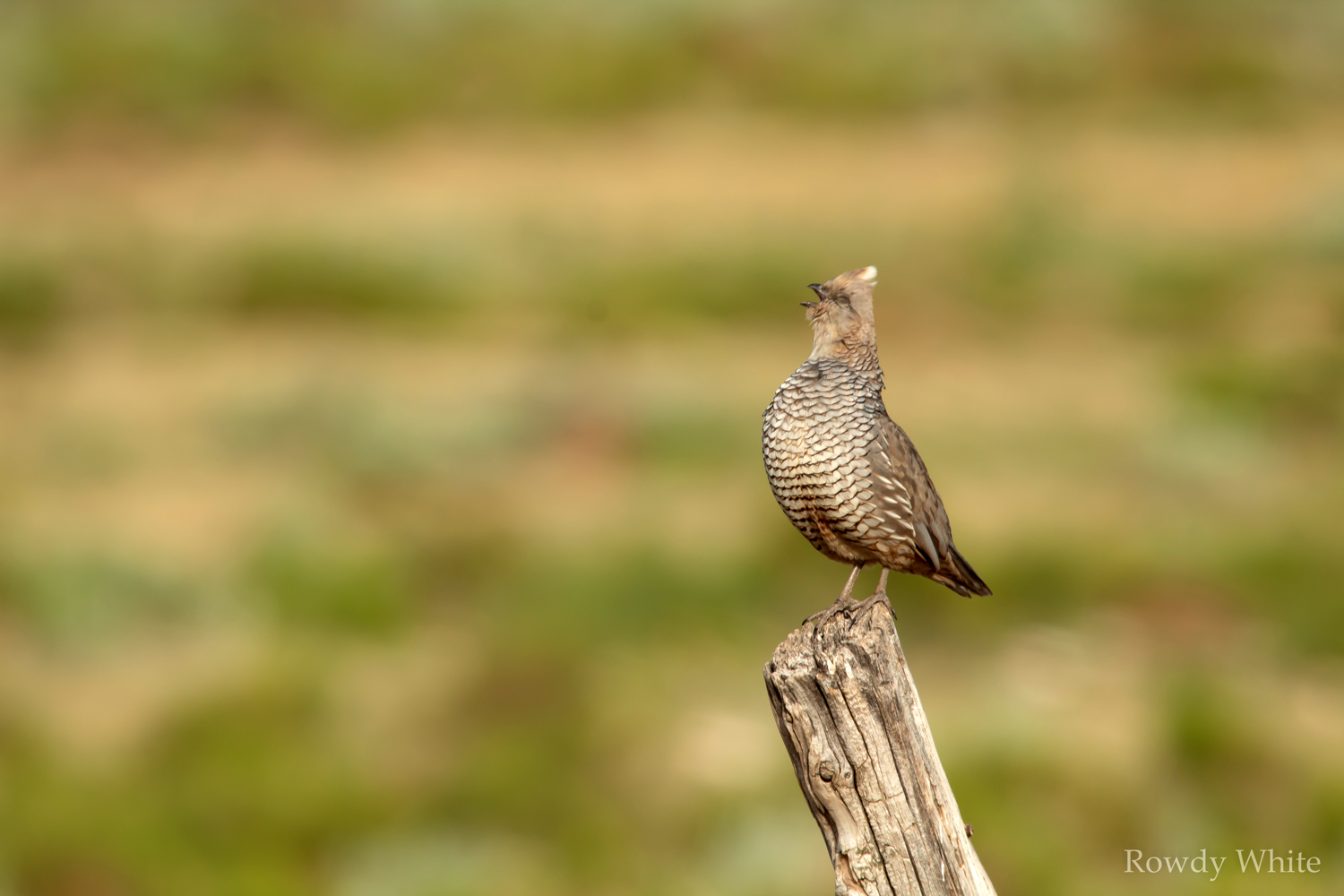 The grant was funded through the Texas Parks and Wildlife Department from money raised from the sale of hunting licenses.

The hunter walks slowly but deliberately through the field, making his way around the mesquite trees and prickly pear cactus intertwined with the native grass. His trained bird dog, coated with large brown patches and smaller speckles, weaves his way in and around the trees in a seemingly random pattern.

Suddenly, the dog stops dead in its tracks, as it is trained to do. That tells the hunter there is a covey of birds hiding somewhere near. But this covey is different. It does not flush like the normal Northern Bobwhite he is after. Instead, it scurries to another hiding place. Soon, the hunter can see these are not Northern Bobwhites.

The bluish-gray chest feathers and tuft of white feathers on top of the birds' heads tells the hunter that these are Scaled Quail, a somewhat common but lesser-known species of quail. Outside of the name, not much is known about the birds, especially its breeding and nesting habitat, and very little research has been dedicated to studying the bird.

Assistant professor Blake Grisham and his colleagues at Texas Tech University's Department of Natural Resources Management within the College of Agricultural Sciences & Natural Resources are hoping to change that.

Thanks to a $402,668 grant from the Texas Parks and Wildlife Department (TPWD) and the Pittman-Robertson Federal Aid in Wildlife Restoration Act, Grisham and other researchers will examine the factors that drive Scaled Quail habitat selection, from temperature and humidity factors to vegetative ground cover, and how that affects the bird's population.

He will be joined on the project by Burnett Foundation Endowed Professor of Quail Ecology Brad Dabbert and Texas State University assistant professor Sara Fritts, a former post-doctoral research associate at Texas Tech.

“There is no evidence to suggest they are endangered or threatened,” Grisham said. “We do know that since the 1980s, based on roadside call counts and covey counts, their population has declined, but to what extent, we are unsure. What we're trying to do is get ahead of any long-term concerns by identifying what habitats they select and what their population drivers are. Then we will move forward with making recommendations to keep the population stable.”

Over the next three years, Grisham, his colleagues and graduate students will capture Scaled Quail and fit them with GPS transmitters that will track their movements, giving researchers a good idea of the types of land the birds prefer.

“This is a whole new foray into the world of quail, and one of the lesser-appreciated ones,” Grisham said. “But we are trying to find out what are those underlying mechanisms are.”

The application process for funding under the Pittman-Robertson Act is different from many other grants available to researchers.

Grisham said the TPWD puts out a call for proposals under the Pittman-Robertson Federal Aid in Wildlife Restoration Act, which awards to researchers money that is raised from the number of hunting licenses issues within the state. With Texas a big hunting state, the act is able to fund numerous research projects.

Each year, TPWD will have 4-5 itemized projects or animal species they want to see research conducted upon. Northern Bobwhite Quail are usually on the list, Grisham said, but this year Scaled Quail appeared on the list alongside species such as swift foxes, mule deer and pronghorn.

Grisham, along with Dabbert, a Texas Tech quail expert and Quail-Tech Research Alliance coordinator, as well as Fritts, submitted a proposal to study Scaled Quail by not only showing what they wanted to focus on, but also the exact technological methods by which they will conduct the study, all of which was developed at Texas Tech.

“Quail Tech is focused mostly on Northern Bobwhite, but they have had numerous projects that have been Scaled Quail-oriented,” Grisham said. “This, however, is our first foray into a really intensive study on Scaled Quail. So this is new to us, and it is very exciting.”

Starting this month, Texas Tech researchers began capturing Scaled Quail on six different ranches in Texas. On the back of each of 20 captured birds on each ranch, they will fasten a backpack with a GPS transmitter to track travels throughout a certain area. That transmitter, which logs a bird's location every 5 minutes, can be removed after a certain period of time and placed on another bird to monitor its movements.

Those transmitters are linked to an antenna and Windows-based tablet where researchers can get close enough to the birds to download their tracking data without disturbing or scaring the covey, which could provide false tracking readings.

The team also will use more traditional, very-high-frequency transmitters that provide a bird's location by a radio signal but require researchers to get closer to the animal to read or download the data.

The data from the GPS transmitters will be downloaded onto an unmanned aerial vehicle or drone, which will be able to immediately fly over the area and map the Scaled Quail habitats in real time, giving researchers and idea of the land the quail select and what they avoid. It also will be able to measure the vegetation in the area to determine the spatial scale of the habitat selected.

“One of the reasons we got this funding is because we're using the GPS transmitters and the drones,” Grisham said. “It's state-of-the-art stuff. So we will have live, on-the-fly habitat selection data as we go through this study.”

At the same time, researchers will deploy data-collecting systems on the ground within a habitat to measure temperature and humidity and determine if the vegetation of the area is conducive to helping the birds regulate their temperature on a daily basis.

Scaled Quail population has decreased steadily since the 1980s with no real explanation why. That is what Grisham and his team are trying to find out.

Scaled Quail and Northern Bobwhite do share some habitats, particularly on the Rolling Plains and Llano Estacado regions of Texas. The Scaled Quail habitats range from the Rolling Plains on the east, down into South Texas and the Rio Grande Valley and west to New Mexico and Arizona. Northern Bobwhite Quail habitats range from the Llano Estacado to the Atlantic Ocean and north into Kansas and Nebraska.

There are some differences in habitat. The Scaled Quail is a more drought-tolerant bird and select a habitat with more brush cover, mesquite trees and prickly pear cactus, while Northern Bobwhite select areas with more native grassland.

“You will find them in the same areas, but they seem to partition themselves out based on cover,” Grisham said. “We speculate their population decline can be traced to two things – too much woody cover, as in too much mesquite that prevents them from foraging or escaping predators, and patch size, or how much habitat is actually located in the area that they can use.”

Depending on what the data shows, the researchers will make recommendations on land management practices that will help increase the bird's population. Grisham said they have some unproven hypotheses. More prescribed fires to suppress overgrowth of cover, and more grazing, they suspect, will be their main recommendations.

“Our goal is to provide the recommendations to support whatever is going on at the ranch without impeding progress,” Grisham said. “We just don't know what that is, yet.”

Grisham said this project is important not only because of what it can do to help stoke the population of Scaled Quail, but also in the manner in which it is being conducted. From the researchers involved to their graduate students – Texas Tech alumni Manuel Silva and Charlotte Wilson, who are leading the work in the field – to TPWD quail biologist and Texas Tech alumnus John McLaughlin serving as project coordinator, this research is an example of how the reputation of the Department of Natural Resources Management and the college continues to grow.

“We were the only university to receive funding from TPWD this year, and we are slowly taking over the quail world,” Grisham said. “This project is the first of many other pieces of evidence that we are gaining traction in regards to research being conducted in the upland game world.”