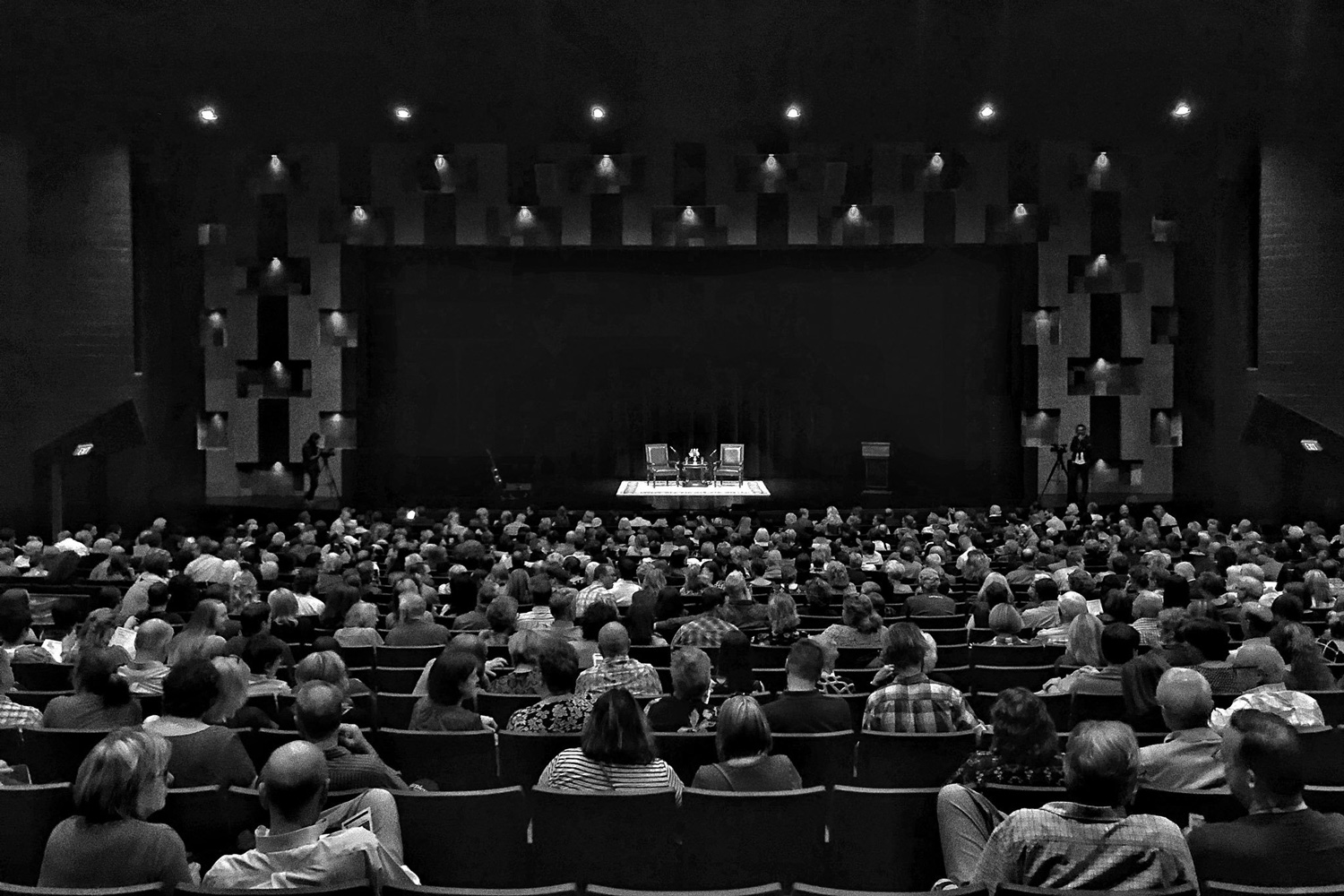 Now in its 13th year, the series has hosted more than 60 events featuring world-renowned performers and speakers for Texas Tech and the surrounding communities.

Thirteen years later, the series has brought almost every type of entertainer there is, from comedy and dance troupes, like Chicago's The Second City and The Paul Taylor Dance Company, to the solo and ensemble offerings of musicians like Judy Collins and the Duke Ellington Orchestra. The series also has included intimate discussions, master classes on the Texas Tech campus and visits to local schools and community groups by the likes of Lyle Lovett, Art Spiegelman and Cheech Marin.

“While entertainment may be part of the series, it is not the primary goal,” said Jo Moore, PLPS director. “Speakers and performers featured in the series exemplify excellence in their chosen fields. Unique events are carefully crafted and presented to stimulate intellectual debate, inspire creativity and expand individual and collective horizons among students, faculty and the South Plains community alike.”

Each event in the series targets key priorities of Texas Tech's strategic plan: educate and empower a diverse student body, enable innovative research and creative activities, and transform lives and communities through strategic outreach and engaged scholarship. While not all programming appeals to everyone, significant efforts are made to present diverse events of interest to various academic areas.

“The Texas Tech University Presidential Lecture & Performance Series hosts performances that inspire, educate and entertain,” said Texas Tech President Lawrence Schovanec. “This series represents an opportunity to bring visitors to campus and engage the Lubbock and university communities. I am grateful for Jo's direction of this program and look forward to the upcoming year.”

The first event of the 2018-19 season is a discussion panel moderated by Texas Tech atmospheric scientist Katharine Hayhoe on Friday (Oct. 12). Hayhoe, a professor in the Department of Political Science and the director of the Climate Science Center at Texas Tech, will lead three panelists in a discussion on climate change solutions.

As the series opens its 13th season, Moore said she's looking forward to another year of engaging with the Texas Tech and Lubbock communities through the events.

“An ongoing goal for PLPS is to more actively engage our student population by presenting diverse programming that includes a variety of genres,” Moore said. “That means programming that is not only topical and relevant, but also free, entertaining and featuring both rising stars and world-class performers.”

One of the major opportunities PLPS provides is collaborative events that complement the lectures and performances. Moore said community outreach is a mandate of the series and underscores her belief that people support things they help to create. The series is a way for people to connect on a deeper level with artists and speakers on topics they may already have a little bit of knowledge.

“This level of engagement with our community and campus is what I am passionate about,” Moore said. “For example, Tony Kushner's campus appearance in 2013 included a theatre faculty dinner, screenwriting and playwriting sessions on campus with select students, a reception and the evening conversation with our theater department chair and a book signing. It was a remarkable opportunity to host a Pulitzer Prize-winning playwright, known for his masterpiece ‘Angels in America' and his Academy award-nominated screenplay ‘Lincoln.'”

After each event, Moore said she receives feedback from students, faculty and staff and attendees from Lubbock and the surrounding areas. Kushner's visit was no exception.

“Having Tony Kushner on campus was an absolute delight,” said Adrian Barnes, then a doctoral student in the School of Theatre & Dance. “Of the most important and influential comments that Mr. Kushner made that night was, ‘critical consciousness, engaging life with a purpose.' This is something I believe all educators, scholars and students need to hear to allow us to keep open minds to things that are foreign and continue to strive to do our best in our respective fields.”

After the event, Mark Charney, director of the School of Theatre & Dance, part of the J.T. & Margaret Talkington College of Visual & Performing Arts, said in a department newsletter that he never expected Kushner would visit Texas Tech and was unsure how the Lubbock community would react to his visit.

“But as I sat with him on stage, asking him questions about everything from graven images and the second commandment to ‘Schindler'sList' and ‘Lincoln' in front of an audience of over 600 very interested people, I couldn't have been more proud,” Charney said in the November 2013 newsletter. “I was proud of our college for pushing to bring Kushner to Lubbock, and for Jo Moore for so skillfully balancing his time between student groups and departments. I was proud of Tony Kushner for meeting twice with student groups, for answering questions with humor and honesty and for standing and signing plays for almost three hours. I was proud of the community for making the time on a busy Friday evening to spend time with a gay, activist playwright and screenwriter.

“But mostly, I was proud of our students for making certain that they took advantage of every minute he gave them, of approaching him with respect and with intelligence and, finally, for making the department proud by asking penetrating and illuminating questions. We all learned what it means not only to write and create, but also, more importantly, the immense responsibility that we have to the world around us as artists.”

PLPS has embraced that responsibility, serving as a springboard for visiting artist programs Moore has initiated with local schools like Lubbock High School and the Margaret Talkington School for Young Women Leaders.

“During the 2015-16 season, award-winning musicians Black Violin and Martha Redbone gave mini-performances for selected classes and shared their experience as musicians,” Moore said. “With arts programming limited in the public schools these days, these outreach programs have been welcome additions and well-received by students and faculty.”

The series that year also included a performance by Complexions Contemporary Ballet, the country's original multicultural dance company. Both events, the dance performance and Redbone's concert, were attended by students from Lubbock's Guadalupe-Parkway Sommerville Centers as a sponsored outreach opportunity.

“The two performances provided artistically, musically and academically enriching contents that provided our students with a diverse look at the world,” said Terrence Hudson, who was a program coordinator at the center. “The majority of them have never gone to a concert or ballet performance. The opportunity that was provided to them was enormous.

“The Martha Redbone concert gave our music students an entirely new look on song development and how multiple instruments can correlate together to provide an aesthetically pleasing musical performance. They were in awe by the sound of her voice and the musicianship of the band. The Complexions Ballet was engrossing to our staff and students. They were captivated by the dancers' fluid movements, the music and how beautifully choreographed the performance was.”

Moore also has worked with the School of Theatre & Dance and Ballet Lubbock, providing master classes to their students led by such world-renowned contemporary dance companies as Parsons Dance Company and MOMIX.

She has collaborated with the Jerry S. Rawls College of Business and their Community Leaders Luncheon series in having musician Peter Buffet, son of Warren Buffet, present a talk on inter-generational philanthropy, followed by a visit to the Margaret Talkington School for Young Women Leaders, where he spoke about empowering women around the world, a focus of this philanthropic work.

During the 2011-12 season of PLPS, U.S. Poet Laureate Billy Collins opened the Spring into Green conference at the Louise Hopkins Underwood Center for the Arts, which focused on water issues, by reading his poetry on that topic. He then led a reading and question-and-answer session with Lubbock High School students as part of a Visiting Authors program and a master class with Texas Tech poetry students.

“Outreach is a key component to the series with speakers and performers participating in master classes, informal discussions, workshops and visits to local school and community groups,” Moore said. “These collaborative partnerships across campus and throughout our community continue to strengthen the series' intellectual and artistic impact.”

In addition to creating opportunities for students at Texas Tech and in the surrounding areas, Moore said PLPS strives to make the series just as accessible for anyone who wants to attend the main events.

Performances are rarely held anywhere but the Allen Theatre in the Student Union Building on the Texas Tech campus, where parking is free and readily available in the surrounding parking lots, and almost all events are held at the same time: 7 p.m. on Friday nights.

In the hope of ensuring that cost is not a barrier to attendance, ticket prices are kept low:  $20 for general admission, $85 for season tickets, and free admission for students.

“The entire series is financially supported by the President's Office, and any proceeds from ticket sales are used to underwrite the series' expenses,” Moore said. “The Presidential Lecture & Performance Series is in essence, the President's gift to the community.”

In addition to the Hayhoe-led discussion panel this week, other events in this season, which runs through April, include musical performances by multi-ethnic Latin pop singer Gina Chavez (Nov. 16) and blues musical powerhouse Ruthie Foster (Feb. 22), a dance performance by Los Angeles based contemporary dance company BODYTRAFFIC (March 22) and a night of comedy with the Reduced Shakespeare Company (April 12).

Moore said she hopes to have a packed house at every event.

“I'm often told the Presidential Lecture & Performance Series is the best ticket in town,” Moore said. “Newcomers to the series and to Lubbock are thrilled at the quality and eclectic aspect that has become the series' hallmark. PLPS offers to students and the community alike concerts and performances one would have to travel to a larger city to experience. And we have it all here in Lubbock, Texas, on the Texas Tech campus.”