Fun and Frightful: Halloween is the Perfect Time for Spooky Subjects 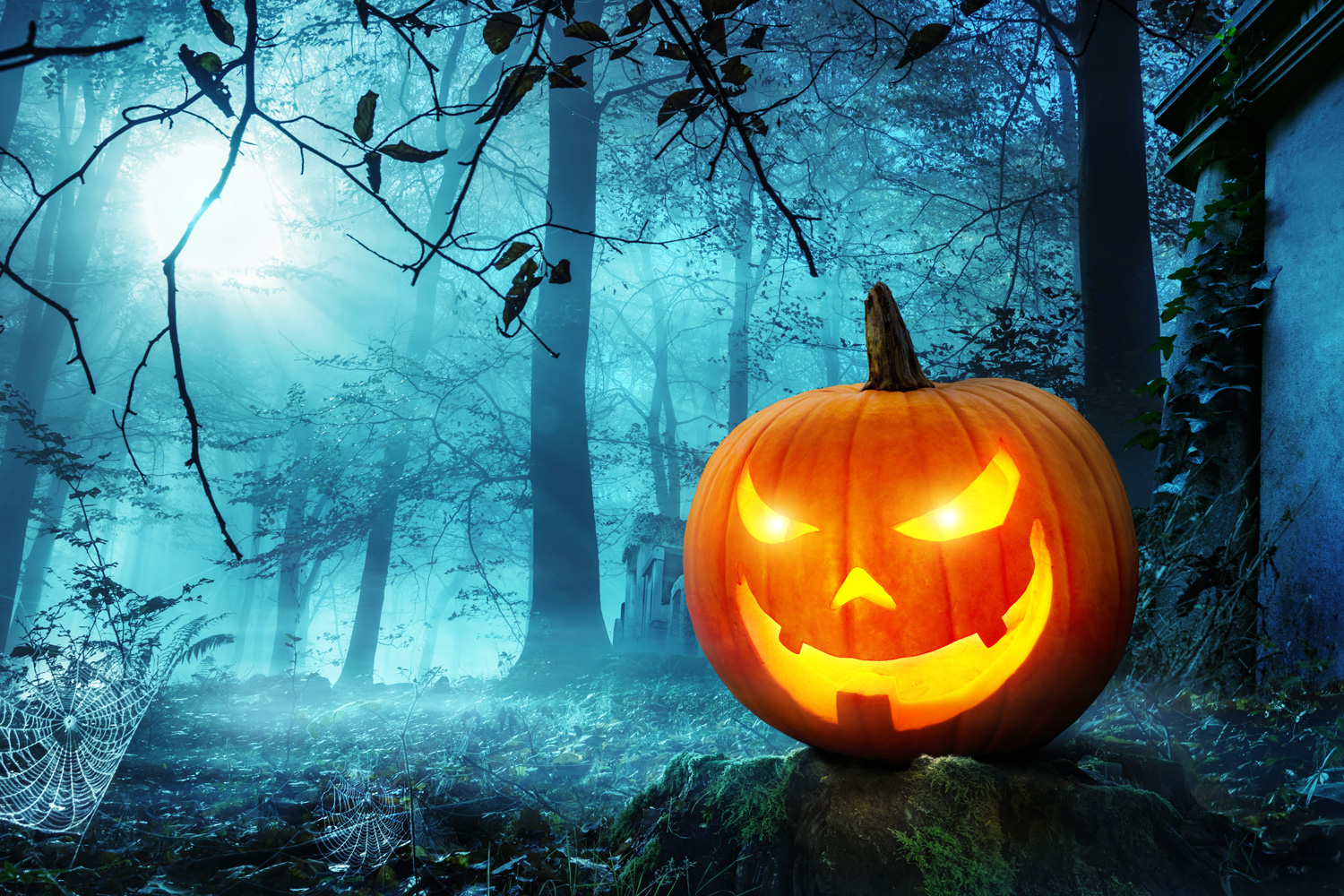 Take a look inside Dia de los Muertos and more.

Institutions of higher learning are typically thought of for their groundbreaking achievements in science and technology, their deeper understanding of the human condition attained through the social sciences, or the rapturous works of art, music and literature they produce.

But once a year, the calendar offers an ominous opportunity to investigate the eerie side of education. At Texas Tech University, that means a chance to look into both the lurid and light-hearted aspects of Halloween.

But Tina Fuentes, a professor in the Texas Tech School of Art, says death shouldn't be something we see in such a negative light – in fact, she says, we should celebrate it. And back in 1999, she began working with Connie Gibbons, then director of the Lubbock Fine Arts Center, on a project to do just that.

“Connie wanted to reach out to a larger community than those already involved in the arts,” Fuentes said. “She threw out the idea of doing something different that would embrace more of the Latino community and I said, ‘What about Dia de los Muertos?'”

Held throughout Latin America on Nov. 1-2, the event, also known in English as the “Day of the Dead,” is a celebration of the lives and memories of loved ones and includes parties with music, food and other things the deceased enjoyed while alive.

“It brings up their memory through a celebratory method and basically embraces death as opposed to fearing death, or looking at it as something negative, and being more positive about it,” Fuentes said, “Death is a reality; it's a part of life, so we should embrace it.”

The year they created the Lubbock event, Fuentes said, they started out slow. Fuentes built a small ofrenda, an altar that honors the dead and features food, clothing, photos and other items with a connection to those being honored, and Gibbons invited other local artists and businesses to do the same.

As the event grew each year, Fuentes and Gibbons were joined by others in the local art community, including people like Jane Bell, who worked at Texas Tech's International Cultural Center (ICC), part of the Office of International Affairs, local graphic design artist Pat Maines and Deborah Milosevich, then director of the Lubbock Arts Alliance.

Years later, the celebration was moved to the Buddy Holly Center and other sites throughout the city, including the Landmark Gallery in the Texas Tech School of Art and the ICC. Upon the establishment of the Louise Hopkins Underwood Center for the Arts the celebration events were extended to this venue as well. Soon, the organizers figured out a way to get even more people to the celebrations.

“We wanted the public to go out and become more involved with all of these entities and spaces,” Fuentes said. “So what we did was create a procession. The procession stopped at every site, with music and different exhibits at each site. We also furnished historical content – at every site, they had historical information about the Day of the Dead so people would become more informed as to what the celebration was about.”

Fuentes said one of her favorite parts of Dia de Los Muertos in Lubbock is seeing how comfortable and familiar people have become with certain aspects of festivities, like dressing themselves and their children in costumes, and incorporating things like La Catrina and calaveras, or skeletons and skulls, which appear in everything from food and decorations to masks and costumes.

“So much of what we usually experience talks about death in such a negative way,” Fuentes said. “Dia de los Muertos is looking at this topic through another lens, as a playful entity and not as something evil or something that only exists in the dark.”

“It was amazing,” Fuentes said. “It became an entity unto itself, and other people started having their own events and more celebrations.”

The celebrations have continued to evolve, keeping some of the original elements but also incorporating the ideas of others who have become involved along the way. Fuentes said that evolution is a beautiful thing.

“It helps people better understand one another,” Fuentes said. “Looking at the events and celebrations of different ideas and perspectives, when you get down to the bottom line of this, it's addressing death and the journey we're all going to take as human beings. If you stop and think about these different methods and different groups of people that have a particular perspective on this same idea, it doesn't mean you have to fully believe the way one group of people believes, but hopefully, you at least begin to respect another perspective.”

What's scary about candy? Shannon Galyean, a registered dietitian nutritionist and assistant professor in the Department of Nutritional Sciences, has a frightening statistic.

“Thirty-eight percent of Halloween candies have trans fats, which are the worst kind of fats,” she said. “Those are the fats that lead to higher cholesterol and heart problems. Choosing candies that don't have trans fats will be important.”

The million-dollar question, of course, is which candies are OK to choose and which are not.

“Your ‘healthiest' – of course, they're not really healthy – option is to choose candies that are low- to no-fat,” Galyean said. “That would be Twizzlers or fruit-flavored gummies or hard candies. Those are going to have little to no fat. You're still going to have a lot of sugar, but at least you can eliminate the excess fat, so that may be the better choice.

“Probably one of the worst candies would be Reese's. When you start looking at the fat and the sugar, Reese's is one of the higher ones. Reese's Pieces have trans fats but Reese's Peanut Butter Cups do not.”

The important things to remember, she said, are that Halloween only comes once a year, so it's OK to splurge a little, and cutting the candy isn't the only answer.

“If you can, plan on being more active the week of Halloween,” she suggested. “Take your kids out to the park, if weather permits, and let them run for 20-30 minutes. They're going to burn off a lot of that extra calorie consumption.”

For some people, planning for retirement sounds like a frightful task. The scarier part, though, is what can happen if you don't plan – or don't plan well.

“When you retire from the labor force, you have to make your savings last through your retirement years,” said Charlene Kalenkoski, a certified financial planner and professor in the Department of Personal Financial Planning. “If you don't save enough, you can run out of money.

“If that happens, and if you have a home, you may be able to take a reverse mortgage, which will provide monthly income. If you can't get enough income from this, you might have to rely on relatives or go on public assistance. You might have to work until the day you die.”

Kalenkoski is the director of Texas Tech's Retirement Planning and Living Research Initiative, where interdisciplinary faculty engage in research that could lead to improvements in retirees' financial and psychological well-being.

“One way to avoid running out of money is to save funds while working and then purchase an annuity, which provides a monthly income for the remainder of your life,” Kalenkoski said. “However, not only do you need enough money for standard living expenses, but you also need to be able to cover the costs of health shocks. You may incur large medical or caregiving expenditures. You need to save enough money or purchase insurance to cover these as well.”

She said many challenges can impede retirement planning – one of the biggest is that people don't like to face their own mortality.

“People don't like to think about life insurance because it makes them think about their death,” Kalenkoski said. “Also, people prefer to spend now rather than save now and spend later. Another thing is that people don't know how long they are going to live, so they have to estimate. Finally, they don't know whether they are going to suffer a health shock that causes them a huge medical expense. They also don't know about health shocks to a spouse that will cause them to engage in or pay for caregiving.”

If retirement planning strikes you as particularly haunting – I mean, daunting – Kalenkoski recommends talking with a professional.

“A certified financial planner's duty is to look after their clients' best interests,” she said.  “They will help you formulate your retirement goals and help you reach them.”