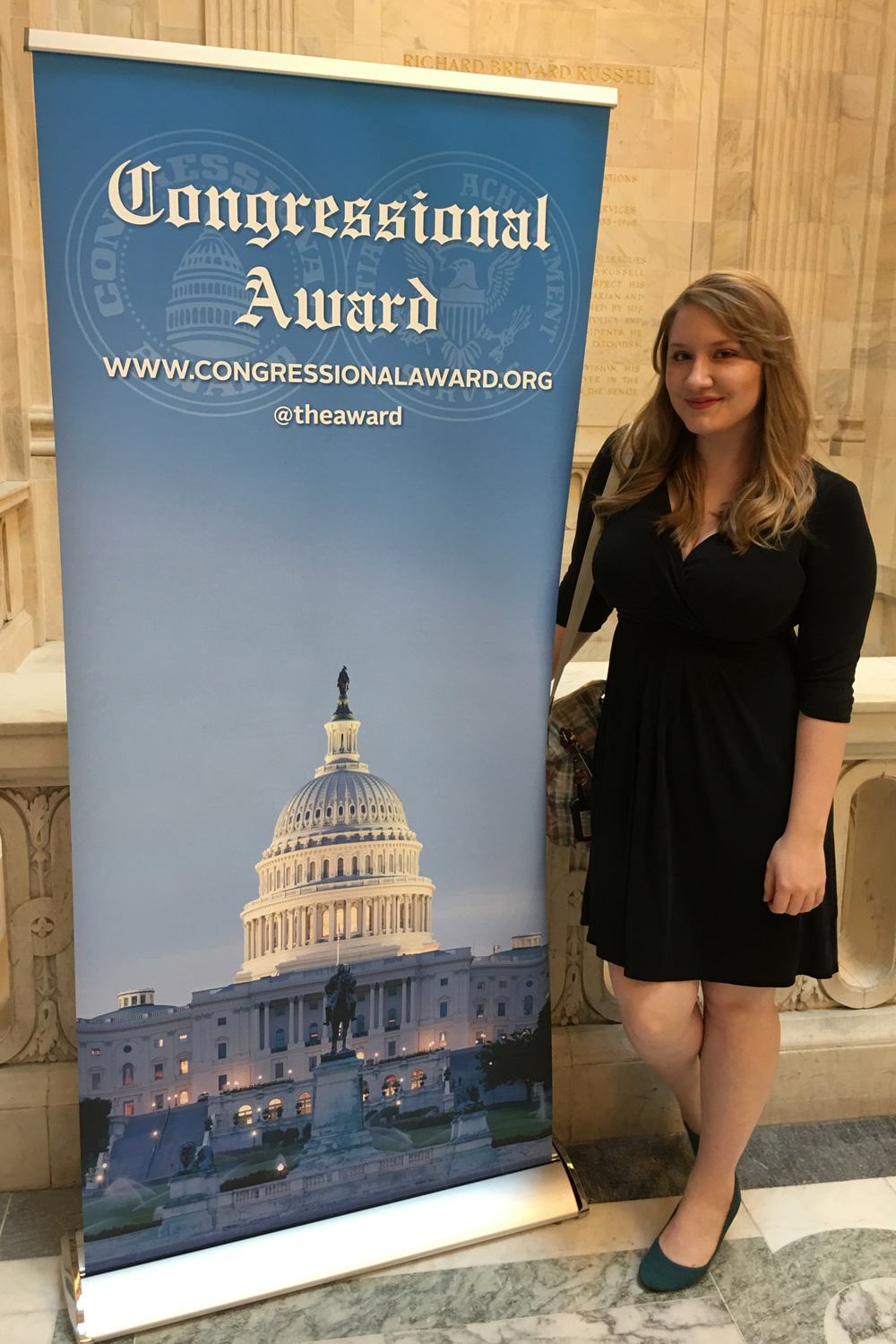 Elizabeth Walker is one of 29 Texans to win the 2018 Congressional Award Gold Medal.

Elizabeth Walker didn't think much of what she was doing when she first started spending time as a volunteer at City Light Ministries in Abilene.

After all, in her family, lending a helping hand was sort of the thing to do.

Four years later, Walker's role in helping feed lunch to the needy – folks who are homeless, working poor or living in poverty – is a major part of her story and a perfect transition to the path she hopes to follow at Texas Tech University.

Walker, an incoming freshman in the Honors College, majoring in Human Development and Family Studies as a segue to nursing school, is one of only 442 high school students from around the United States and 29 from Texas to earn the prestigious 2018 Congressional Award Gold Medal. She and her parents, Poppy and Martin Walker and older sister Hannah, attended a ceremony in Washington, D.C. on June 21 where Walker was recognized with her peers.

She is the first student to win the award since 2005 from District 19, a region that which encompasses Abilene and Lubbock.

“I had been in a student council group that volunteered there once a month, so I had a taste for what it was like to work in that kind of environment,” Walker said. “When I was looking for more opportunities to volunteer, I felt comfortable there. I felt welcome, and it gave me the chance to get to know people.

“Volunteering at City Light taught me I have a lot of blessings in my life. I learned a lot of skills about communicating with people – having patience to listen when they talk about their problems.”

Walker's volunteer time also helped hatch an idea. When her mother, Poppy Walker, saw a story on the Congressional Award, she thought it fit what her daughter had already accomplished, although there was plenty of work to do.

To qualify for the Gold Medal, a student must complete 400 hours of voluntary service, 200 hours of personal development, 200 hours of physical fitness and a five-day, four-night “expedition or exploration” component.

The first part was no problem: Walker began volunteering at City Light as an 8th-grader and logged more than 600 hours.

“Several years ago, she originally came in to help with a group of home-schoolers, and she just kept coming back,” said Lynn Martin, an associate director of the feeding program at City Light for the last 15 years. “She loves it here and the people she has helped through the years love her. She knows what they like to eat, knows when they get a haircut. Her heart is here. Nursing is right up her alley because she has an amazing amount of compassion for people.”

To get serious about the Congressional Award, Walker had to slip out of her comfort zone. Admittedly not a fitness junkie, she said she had to find an activity to fill the physical fitness requirement. The answer turned out to be a spot on an archery team.

Tasked with planning out the trip, she wandered way outside the box and chose a spelunking adventure that took her all over West Texas and New Mexico for nearly a week.

“That was very much out of my comfort zone, but it wound up being a great experience,” she said. “Getting to go out and see what nature has to offer was amazing.”

Now that Walker has had time to step back and soak in the experience, she refers to the two-year process as fun.

Early on, though, Walker saw something much different.

“It was a little daunting because it was something that took me more than two years to finish,” she said. “It wasn't something I could go do in one day. I had to stick with it and do some things I wasn't used to doing, but it became fun along the way. Whenever I got something done and I could log more hours, I felt a sense of accomplishment, especially whenever I was done with one level and knew I was moving closer to my goal.”

There was plenty of inspiration along the way.

At home, Walker's family sure she had a strong support system. The support became reciprocal when Martin Walker was diagnosed with Stage 4 throat cancer during her senior year. Walker said her father, an Abilene police officer, is slowly regaining his health and “gets a little better each week.”

All along, Walker spent hours at City Light – the place where her motivation to help others grew and flourished.

“I've really come to love the people there, so that part was really enjoyable,” Walker said. “Because I want to go into nursing, working in a soup kitchen taught me how to be passionate about people who aren't in the same situation I'm blessed to be in. They're having tough times and, just like with nursing, it's really important to get on their level and hear what their struggles are so you can find the best way to help them.”

Although winning the Congressional Award has been achieved, Walker doesn't plan on letting up.

“I'm really hoping to take the habits I've developed with me to college,” Walker said. “I want to find places in Lubbock where I can plug in and be active in the community and continue the learning process with different kinds of people and hear what they're going through.”

Martin, who is effusive in praise of one of her most reliable volunteers, would expect nothing less.

“She is an amazing person,” Martin said. “She has such a wonderful heart and she always talks about what she can do to help people. Elizabeth is one of those people who will keep pushing further and won't settle.”