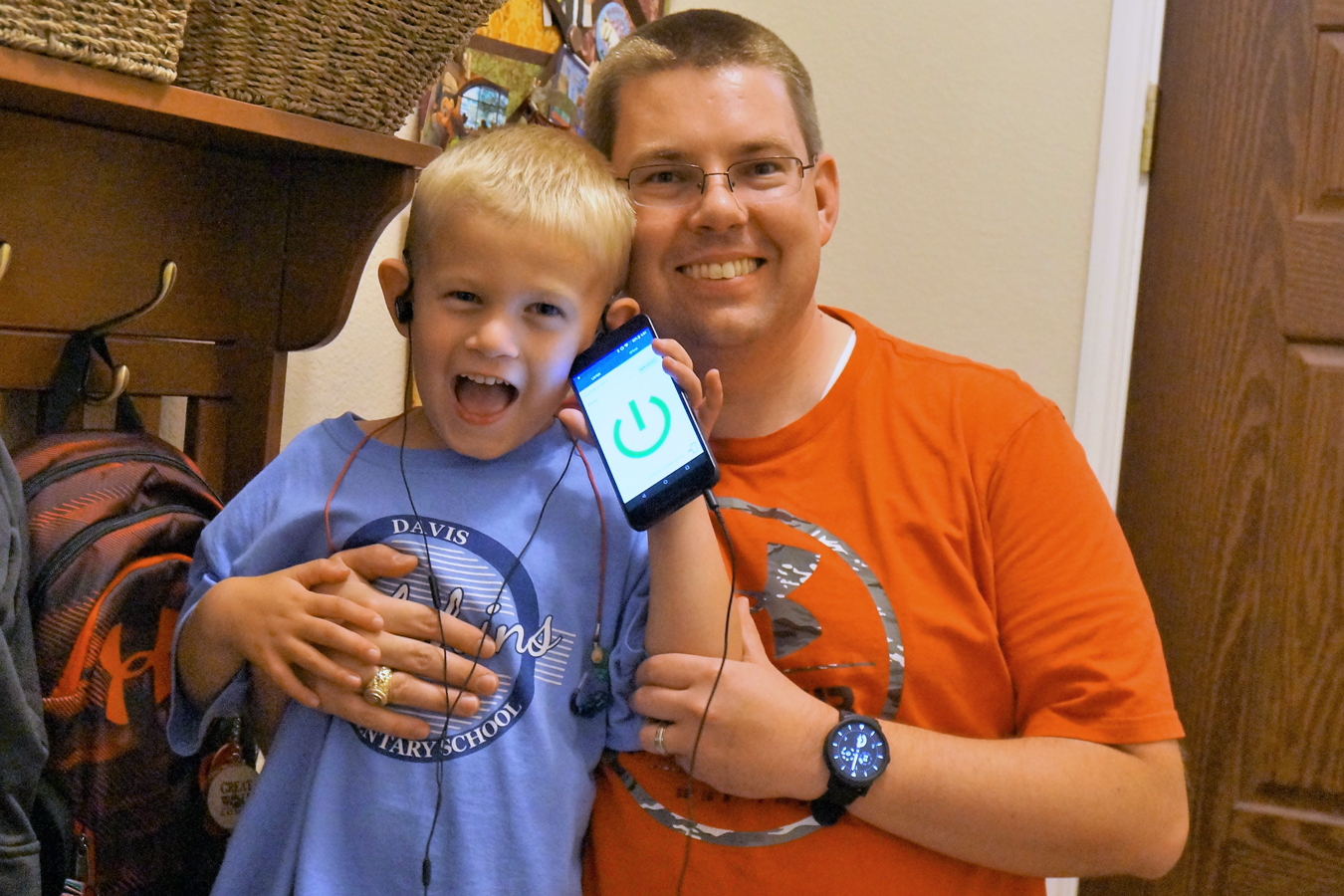 For Erik Peterson, a graduate student in the Texas Tech University Graduate School's online master's in software engineering program, there is an extra item to add his 6-year-old son, Luke's, list: hearing aids.

“My wife, Valerie, and I found out three years ago that Luke has moderate hearing loss in both ears,” Peterson said. “He has hearing aids, and they're great, but whenever we go to the water park or the pool, or if he's going to sweat a lot, he has to take them out because they're not water resistant at all.”

Not only are most hearing aids not water resistant, but they're also expensive, typically costing thousands of dollars per hearing aid for high-quality ones. To allow Luke the same opportunities as other kids his age, Peterson created and developed Hearing Phone, an app that allows parents, caregivers and teachers to use their phone to communicate with the hard of hearing.

“I had this idea that, since phones are starting to become water resistant, maybe you could do something similar to hearing aids with the phone, and you could use the phone in places where you can't use hearing aids,” Peterson said. “For the basics, you just need a phone that's water resistant or one with a case where you could still plug in headphones. Then you download the Hearing Phone app, and you're good to go.”

What differentiates Hearing Phone from similar apps is it allows two phones to connect together via Wi-Fi. Sound goes from a microphone in one phone's app directly to a different phone running Hearing Phone, then joins with what the second phone hears. It's similar to the way walkie-talkies work, but more advanced.

Though Peterson has always had a desire to improve the way Luke communicates in wet conditions, it wasn't until he heard about the Rehabilitation Engineering and Assistive Technology Society of North America (RESNA) design competition that he had the push he needed to implement his idea.

“Rattikorn Hewett, the computer science department chairwoman, sent an email about an engineering competition saying it would be good if somebody entered,” Peterson recalled. “I had had the idea of using a phone as a backup hearing aid for a while and was told I could enter it in the competition. I got in touch with one of the computer science faculty, Susan Mengel, and worked with her.”

An idea that had been in Peterson's mind for years suddenly had to be developed in three months. Though challenging, Peterson, with guidance from Mengel, an associate professor in the Department of Computer Science in the Edward E. Whitacre Jr. College of Engineering, created the app prototype, made a video explaining his design and wrote a five-page entry paper on it.

Out of the more than 40 people who entered the competition, Peterson was named a finalist.

“RESNA flew me to Washington, D.C., to attend and present at their conference,” he said. “Even though I didn't win, I still got to show people my design, so that was cool.”

Mengel is proud of the work Peterson achieved during those few months, as well as the caliber of student he is for the program.

“Erik Peterson is one of our finest master's students in software engineering,” Mengel said. “His passion to help people is only excelled by his technical expertise in designing and developing software systems to solve real problems. His work on the RESNA project is only one example of his exemplary work to develop a mobile platform to help his son hear better in environments where hearing aid use would not be practical, while using smartphone technology commonly used by people everywhere.”

Mark Sheridan, dean of the Graduate School, appreciates Peterson's pioneering spirit all while pursuing a non-traditional avenue for his degree.

“Our online graduate programs at Texas Tech create a unique learning experience for our students and continue to push innovation,” Sheridan said. “Erik Peterson is a prime example of the type of innovative students we have here at Texas Tech who use their research to make a difference and enrich lives.”

Peterson anticipates launching the Hearing Phone app later this year for Android devices, with iPhones to follow. His ultimate goal, however, is to teach computer science on the community college or university level so he can be on a similar schedule as Luke and his 9-year-old son, Nathan.

“Pursuing my degree online was important to me because I have kids at home, and my schedule can get kind of goofy when they're sick,” Peterson said. “Texas Tech has one of the only online software engineering master's programs that I found in Texas, and it's been a lot of fun. It's been 15 years since I finished my bachelor's degree, so it's been a really good challenge. There are a lot of good professors in the computer science department. I've enjoyed being at Texas Tech.”