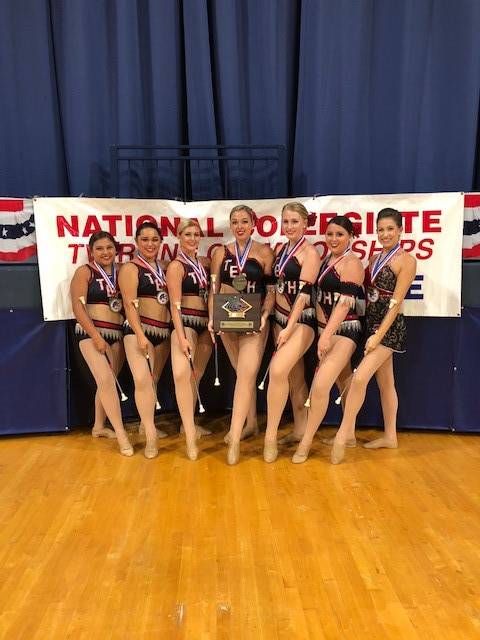 Six members of the Texas Tech University Twirlers have returned with two team and 24 individual awards after competing at the America's Youth on Parade National Baton Twirling Championships, held July 24-28 at the University of Notre Dame in South Bend, Indiana.

Competition in the team categories was stiff this year, said Bethany Tolley, program coach and coordinator.

“We had an amazing routine and great energy,” Tolley said. “For the halftime competition, this is the routine we put together in about two weeks. They worked really hard on it. The placement is what it is, but as long as you're happy with your performance, you've succeeded. They were really happy with second place.”

This marks the eighth year the Texas Tech twirling team has competed at the national twirling championships. The team won 19 team and individual awards in 2017 and back-to-back national titles in 2014 and 2015.

“I was really happy with the way they performed – they did the best job I've ever seen them do,” Tolley said. “This is the first time they all placed in the top-10 in everything they competed in, and that is amazing.”

The Texas Tech Twirlers are part of the Goin' Band from Raiderland, the university's 450-member marching band. The Goin' Band is part of the School of Music in the J.T. & Margaret Talkington College of Visual & Performing Arts. The 2018-2019 team consists of eight twirlers and one feature twirler, freshman Abby Morgan of Gonzales, who also competed at nationals.