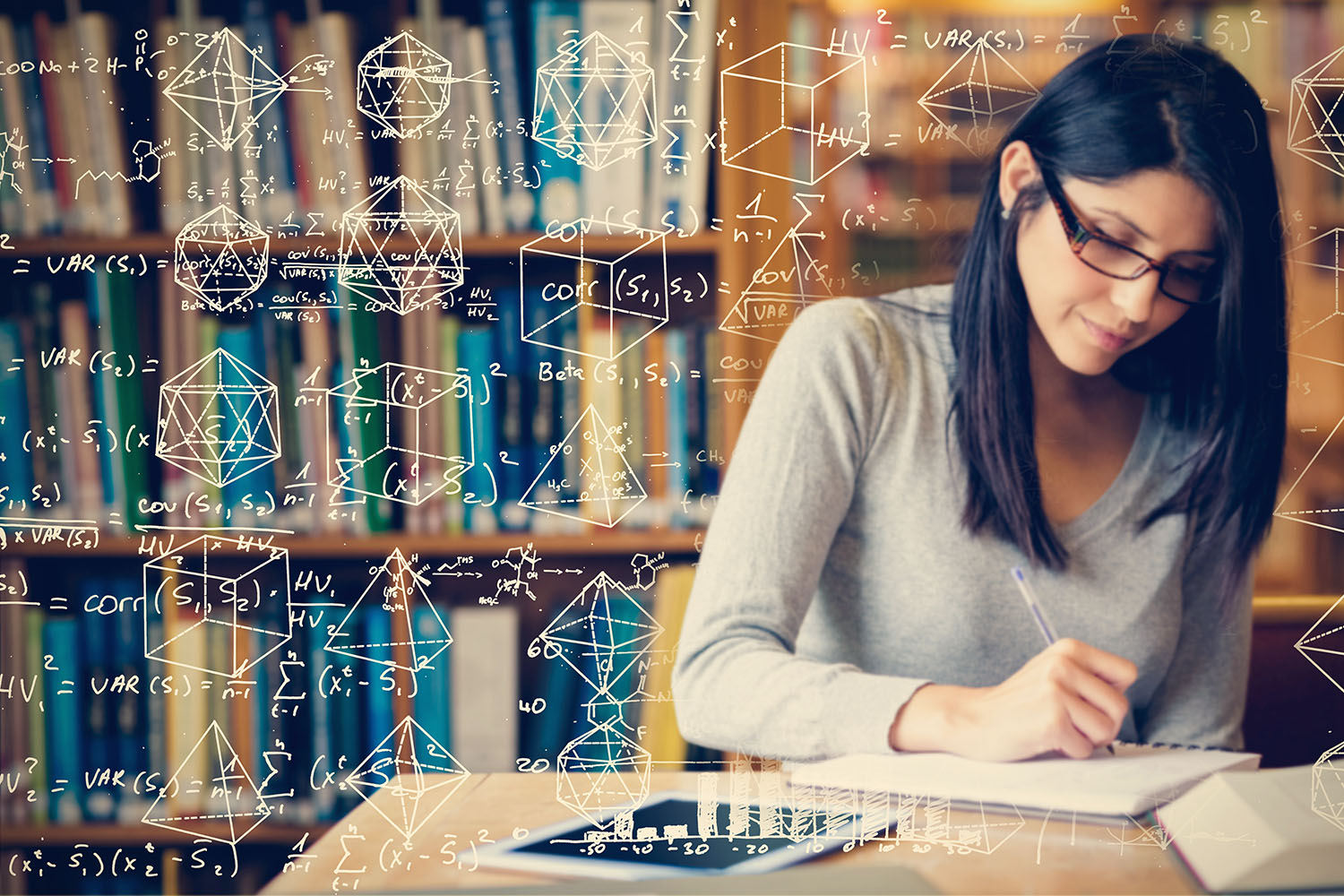 Texas Tech University hosts the Enhancing Diversity in Graduate Education program, which focuses on increasing the success and number of women and minority students in graduate programs in the mathematical sciences.

When it comes to science, technology, engineering and mathematics (STEM), women have been historically underrepresented, not only in the workforce, but also at the collegiate level. U.S. Department of Commerce data shows that while women filled almost half of the jobs in the U.S. in 2015, they held only 24 percent of STEM jobs.

Though the number of undergraduate degrees earned by women and men are nearly equal, women still only make up about 30 percent of all STEM degree holders. Even fewer go on to complete a graduate program in STEM.

This month, Texas Tech University hosted Enhancing Diversity in Graduate Education (EDGE), a national program that focuses on increasing the number of women and minority students who successfully complete graduate programs in the mathematical sciences. The four-week program, co-directed by Raegan Higgins, an associate professor in the Department of Mathematics & Statistics in the College of Arts & Sciences, and Ami Radunskaya, professor of mathematics at Pomona College and president of the Association for Women in Mathematics, is in its 20th year and includes 14 women begging their graduate careers in mathematics at 13 institutions across the country this fall.

Mark Sheridan, dean of the Texas Tech Graduate School, said programs like EDGE can help increase participation of students in programs where they are currently and historically underrepresented.

“Programs like this bring awareness to the importance of diversity and increasing participation of women in STEM fields,” Sheridan said. “Women are substantially and significantly underrepresented in the STEM field, specifically in the field of mathematics. My hope is they can see there are others like them and they are not alone.”

EDGE, originally the Spelman-Bryn Mawr Summer Mathematics Program at Bryn Mawr College and Spelman College, began as a way to prepare participants for the transition into their first year of doctoral studies. As the program grew, leaders expanded mentoring and networking services in order to provide ongoing support as participants continue their academic and professional journeys. EDGE now consists of two basic components: the intensive summer program and a follow-up mentoring program.

In recent years, the summer program has been hosted at universities across the country. When Higgins became co-director in 2017, she knew she wanted Texas Tech to host the 2018 cohort of EDGE and began working with several groups on campus, including the Office of the President, the Office of the Provost, the Graduate School, the STEM Center for Outreach, Research & Education and the Division of Diversity, Equity & Inclusion, to make it a reality.

“They have a class for an hour and a half, then a problem session where they work in small groups with mentors on additional problems faculty have assigned,” Higgins said. “We have lunch together every day as a part of our community building. In the afternoon they have another class, followed by a problem session or colloquium.”

The 2018 cohort includes one Texas Tech student and 13 others from 12 institutions studying a variety of mathematical areas, including applied mathematics, pure mathematics, statistics and topology.

“All of the participants are going into doctoral programs,” Radunskaya said. “Many of them go into some form of teaching. Some go into business and some of them work for places like Google or Zillow. We have someone at the Department of Defense and we've had people working as congressional fellows. At least two have started their own programs that help women at different levels of the graduate journey.”

“I had the chance to speak with a few participants, and I was impressed with their genuine interest in the contemporary mathematical research and strong motivation to succeed in their graduate studies,” Toda said, “One of the participants, Alexis Gomez, is a former undergraduate student and very active Math Ambassador. As a woman and a minority who excelled as an undergraduate student and will be pursuing a doctorate in mathematics starting in fall 2018, Alexis is a good representative of our commitment to excellence and diversity.”

The students began the program by studying and working problems in linear algebra and real analysis. They will conclude this week after focusing on measure theory and machine learning during the final two weeks of the program. The courses are led by faculty from the host university and other participating institutions, this year including Radunskaya, Texas Tech professor Angela Peace, Dickinson College professor Sarah Bryant and Leona Harris, a professor from the University of the District of Columbia.

Faculty not only lead courses, but they also hold office hours and provide feedback on the mathematics problems the students solve both in and out of class. Radunskaya said many students choose to spend their evenings working on problems well into the night.

“We really push hard for a lot of problems turned in because this is one of the rare chances they will have to get actual feedback with no grades on how they are writing proofs,” she said. “There's this quantum leap between the expectation in undergraduate studies and graduate school. All of the sudden you're supposed to know how to do that like a pro, and where do you learn that?”

The problems students work are similar to those typically seen on exams as they work toward their degree. Radunskaya said these problems were chosen because they can often be a hurdle to students on their academic journey.

“We give them these problems so that they see them now, and we can develop strategies for tackling hard problems,” she said. “We divide up who takes notes for which lectures and who carefully writes up difficult problems, so at the end they go away with this book of notes and solved problems that I think is very useful to them.”

That collaborative effort in class among EDGE participants is one of the first steps in building another aspect that is essential to their continuing success.

“You start building your math community without even really knowing it,” Higgins said. “When students first arrive, they may just think, ‘I need to get through these four weeks,' and they don't realize the benefits until later. You have collaborators for life, even after you finish your degree.”

Higgins said this network is especially important for students completing their doctoral studies at an institution different from where they completed their undergraduate degree.

“Your fellow undergraduates have had a similar experience, but now you're going to a new place for graduate school, and you don't necessarily know these people,” she said. “With EDGE, you have a group of women who have had a similar, graduate-like experience with you, so you already have a resource, a community or support system, in place before you embark upon graduate school. To me, that's a huge benefit.”

The program also gives women who may feel out of place in their departments a network of people who understand some of the issues they face outside of math.

“We want to give them a kind of brief immersion into what graduate school feels like so then we can address issues that will come up, like feelings of judging yourself by others, imposter syndrome, feeling like you don't belong,” Radunskaya said. “The reason this is so important for women today, and especially women from historically underrepresented groups, is that if you're a majority group and you go to graduate school, some things happen naturally. You get invited to events or you feel comfortable talking to others. If you're in a minority and you don't feel like you really belong, you really need another network. The benefits of that network are really hard to predict, but for most everyone, they are major.”

That network includes more than just the students and faculty in the current summer session. During the summer session, a reunion conference is held during the weekend at the midpoint of the program. The purpose of the conference is two-fold: members of the previous year's cohort share personal and academic experiences after their first year in graduate school with the current participants, and EDGE faculty can address any issues the previous cohort may experience as they prepare for their second year.

“It gives us an opportunity to check in with them and give them advice,” Radunskaya said. “Sometimes major interventions are required. There have been times where someone will tell me, ‘I don't belong in this program.' We can call and figure out what's going on and either move that person to another program or help them resolve the situation.”

The support and resources are available year-round to the more than 260 women who have participated in the program, at least 90 of whom have completed doctoral degrees.  Members also participate in national conferences, workshops, mentor networks and stay in touch through various methods, celebrating milestones and offering support when needed.

“Even though you may be small in number in your particular program, you have this larger net across the country you can always draw on,” Sheridan said. “You have similar issues and concerns, and you can help each other to navigate the landscape and to contribute to your success in your program. The idea is to provide a support framework so you understand there are common issues with being a woman in math and STEM fields. Ultimately, it would expand your vision in regard to career options.”

As an EDGE participant in 2002, Higgins has experienced the benefits of the program firsthand. The people she met as a student have become her fellow collaborators when it comes to teaching and research. Some, like Radunskaya, who led one of the courses Higgins completed in EDGE, have become more than mentors.

“Now, I'm co-directing EDGE with her – who would have thought that would happen?” Higgins said. “EDGE is not just a summer program. The summer session is just the introduction. It starts with the math, but it doesn't stop there. It's life.”

For more information on the EDGE program, visit the website.