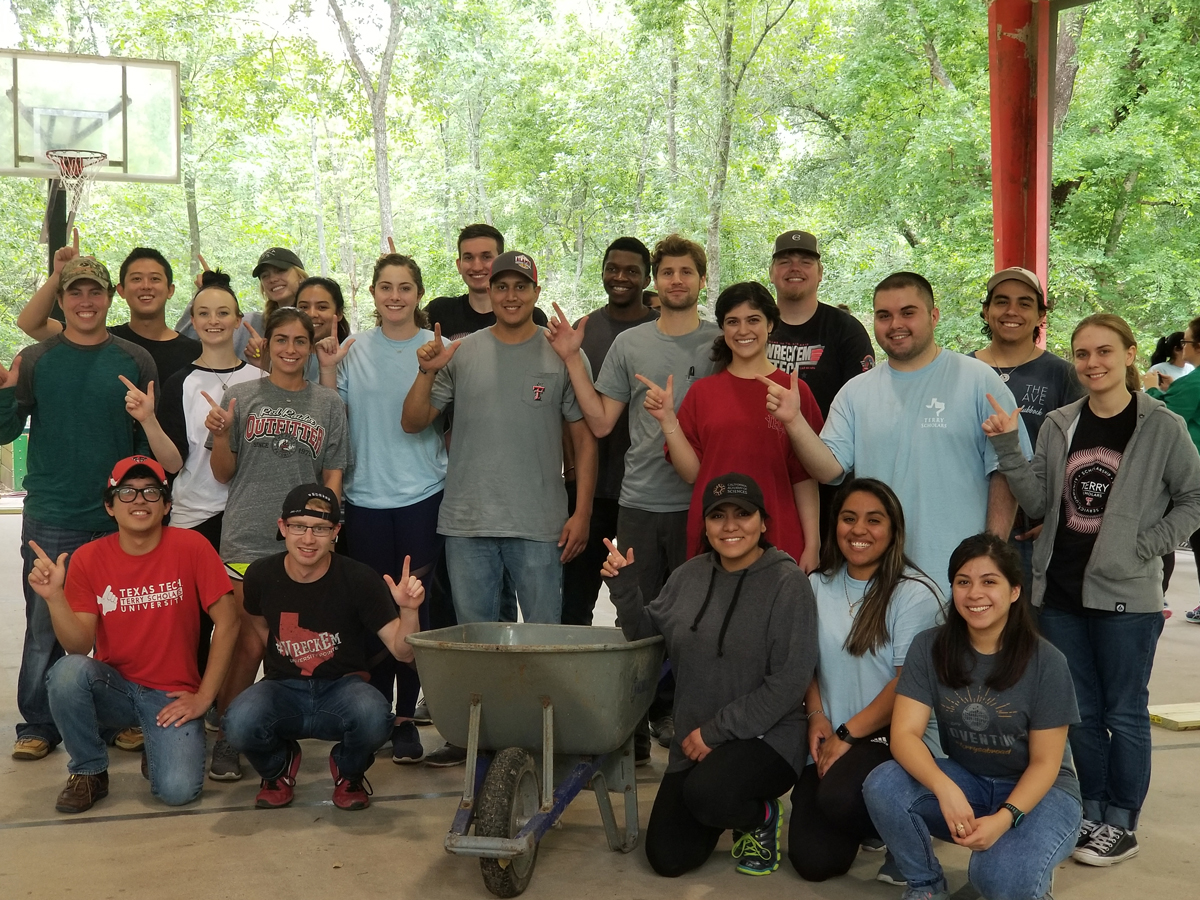 Twenty-two students traveled to Katy to help the local YMCA.

On the night of Aug. 24, 2017, a Category 4 hurricane slammed into South Texas. Over the next week, Texans and the rest of the U.S. watched in dismay as Hurricane Harvey, one of the costliest natural disasters in modern U.S. history, dropped about 33 trillion gallons of rainfall.

One region affected heavily by the hurricane was the Greater Houston metropolitan area, home of Terry Foundation founders Howard and Nancy Terry. Texas Tech University Terry Scholar recipients in Lubbock watched as water levels continued to rise and the city of Houston became unrecognizable, even to those who live there.

What defined Hurricane Harvey, however, was not the horrific storm or devastation; it was Houstonians, Texans and Americans coming together to help each other. In the following weeks, images of men carrying women and children through flooded water, neighbors reaching out their hands and strangers saving strangers popped up every day.

The Texas Tech Terry Scholars quickly recognized that the Greater Houston area needed help. Heather Medley, Terry Foundation scholarship coordinator, and Marcus Gonzalez, a senior from Little Elm and president of the Texas Tech Terry Scholars, went into action, actively working with the United Way of Texas to find where in the Greater Houston area their help was needed.

“As the water was rising, we were trying to get updates from our Terry family,” Medley said. “We knew then we wanted to do something to help the Houston area. So we contacted the United Way to find a partner, someone that needed our help.”

Eventually, Monty Ballard YMCA at Cinco Ranch in Katy was identified as the target organization for the project. Throughout the course of the storm, the YMCA camp was flooded with more than eight feet of water. The facilities were completely damaged, leaving the YMCA no other choice than to close access to its outdoor campgrounds.

Medley and Gonzalez hit the ground running, planning a regional service trip and inviting the 13 schools in the Terry Foundation network. After they created their goals, the entire Texas Tech Terry Scholar family stepped up to plan the project. Months of conference calls and perfecting logistics went into creating a plan to not only rebuild the camp, but to also help out local Y Teens in leadership development.

On April 20, the group of 22 Texas Tech students packed up vans for a weekend trip to Katy, ready to facilitate a project that would have a huge impact.

The next day, students met with Terry Scholars from University of North Texas and Sam Houston State University and began leading projects around the camp. While the overall goals of the Terry Scholars were to rebuild the camp and help Y Teens, Texas Tech Terry students had an additional goal: making sure all projects ran smoothly.

“I had no doubt that our Terry Scholars would rise to the occasion,” Medley said. “We have several engineers who stepped in, several transfer students who drove rented vans. They jumped in and helped with everything.”

The Terry Scholars were divided into two projects. Some students worked on rebuilding the camp. Since duties were dependent on the work of prior volunteers, work included anything from moving trash cans and benches around the camp, to building games and activities for camp-goers.

The largest project of the trip was the Ninja Warrior course. Terry Scholars helped facilitate the design and ordered supplies to build a multifaceted obstacle course. Although the Terry Scholars faced several challenges in this project, they created camp equipment to be used by generations of YMCA camp-goers for years to come.

“When we began working on the projects, we were informed that the supplies delivered were incorrect and would need to be reordered,” Gonzalez said. “Instead of becoming discouraged, the scholars banded together to get plans into place and worked on other tasks so no time was wasted. This really showcased the ingenuity and work ethic of the Terry Scholars.”

The Monty Ballard YMCA used countless volunteers in the months since Hurricane Harvey to rebuild the camp back to a working condition by summer. Although scars remain, like debris-filled trees, Camp Cinco Ranch is set to open this summer, hosting all typical summer camp activities.

The Terry Scholars didn't stop at the campsite. They held a leadership workshop with local Y Teens in Katy. Throughout the workshop, students led Y Teens in various interactive activities and then revisited the lessons learned in each activity. The goal of the workshop was to work on self-esteem, college readiness and team building.

Within 40 hours, Texas Tech Terry Scholars had led students from across the state, rebuilt a devastated campsite and provided valuable knowledge to a group of Katy teenagers.

“I believe there was no better way to honor the 30th anniversary of the Terry Foundation than by serving the hometown of our founders, Howard and Nancy Terry, especially when the area is in need,” Gonzalez said. “I definitely feel a sense of reward having put so much into the project.”

The heart of Texas Tech

Medley said the service trip would not have been possible without the support of Texas Tech and the Lubbock communities. Throughout the year, Terry Scholars relied on the hearts of Red Raiders and Lubbock citizens as students sold T-shirts and held several additional fundraisers to earn the money needed for the service project. Several scholars who were unable to attend the trip still dedicated time to the project by helping with logistics, fundraising and planning.

The students weren't the only Red Raiders making an impact in Katy that weekend. Prior to attending the trip, Medley worked with Joyce Zachman, president of the Texas Tech Parents Association, to request help feeding Terry Scholars on their way back to Lubbock.

Three Houston-area Texas Tech mothers, completely unrelated to the Texas Tech Terry Scholars, showed up to the YMCA camp with hand-packed lunches for all the Terry Scholars at the camp. The Red Raider moms also packed snacks in the bags for the scholars' trip home.

The Houston service project was the second of its kind for the Terry Scholars. In 2017, the Terry Foundation began regional service projects to instill the value of service in scholars. Terry Scholars from the University of Texas in El Paso (UTEP) visited Lubbock to help Texas Tech Terry Scholars serve Paul's Project, a nonprofit organization in Lubbock that provides a living community for homeless individuals.

Students from both schools spent the morning filling blessing bags with essential needs for individuals, served food, built a fence and clean various areas of the organization's Grace Campus location. Terry Scholars also got the chance to interact Lubbock Mayor Dan Pope at the project.

The Texas Tech Terry Scholars had planned to travel to El Paso this year, where the UTEP scholars would lead them in a service project. After seeing the devastation of Hurricane Harvey, both chapters' presidents agreed to postpone the trip and decided the Greater Houston area was where their help was needed most.

“I enjoyed seeing everyone happy and willing to serve and sacrifice their time to help,” Gonzalez said. “People of different backgrounds came together toward a common goal. Everything just seemed to fall into place that Saturday. I grew to appreciate my Terry family much more. It was just a great experience all the way around.”