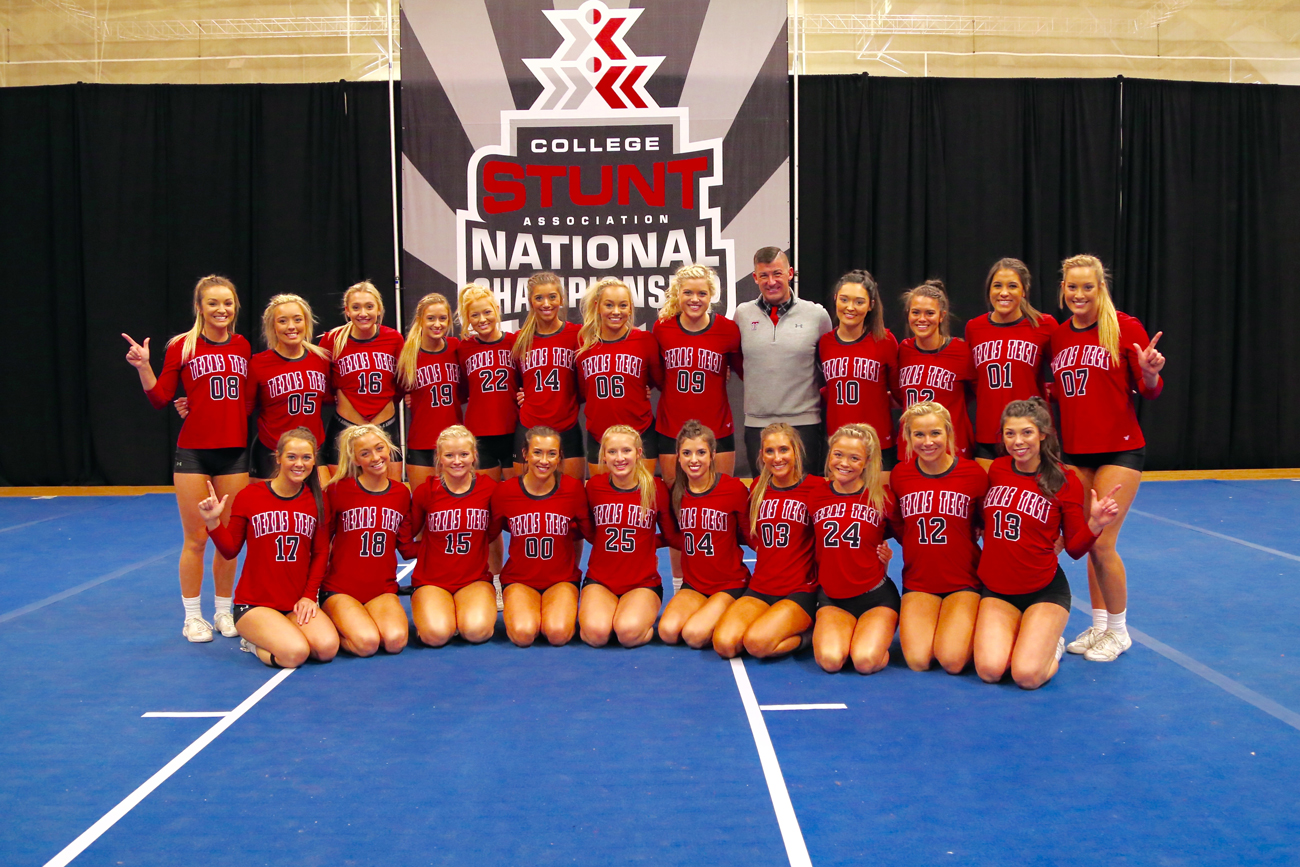 Bruce Bills earned Coach of the Year, and the Red Raiders added two more national awards to their 2017-2018 list of honors.

Members of the Texas Tech University Spirit Program wrapped up an award-winning season last week with back-to-back championships and three more honors to add to their list of accomplishments over the past year.

Garcia, a senior human sciences major from San Diego, Texas, and Ollison, a senior general studies major from Grand Saline, have won several national titles as stunt partners, including second place at the 2018 College Cheerleading and Dance Team National Championship. They were named to the national team in January and helped the squad secure the gold last week against nine other teams from around the world.

“It was very impressive,” Bills said. “They did a great job. They're working with the best cheer athletes in the country, making up the best team, and they fit right in. They are very talented and represent not only the university and program well, but also the country. Their performance was a great routine to watch.”

Immediately after the ICU competition, the athletes headed to the national stunt championship, where Bills was named the Division I STUNT Coach of the Year, a first for Texas Tech. This is his seventh year as head coach and only the second year Texas Tech has participated in the competition.

“I was surprised and shocked,” Bills said. “There are a lot of people who help make this happen and who support me, including the great athletes who make up our squads, and staff and administration who support our program. I'm very honored to represent these efforts by earning this award.”

“Bruce has worked so hard to develop Texas Tech's All-Girl Cheer Squad into a nationally competitive team through USA Cheer's STUNT program,” Rhode said. “It is gratifying to see him rewarded for his efforts by receiving the 2018 National STUNT Coach of the Year Award.”

Bills said the award is a recognition of the level of excellence expected of the members of the Texas Tech spirit squads and their dedication to meeting those expectations. That commitment was clear in Michigan as the All-Girl Cheer Squad made it to the final rounds of the stunt competition, placing fourth in the nation.

“What makes us unique is the fact that our all-girl team also is cheering at the football, basketball and volleyball games, and they're doing public appearances,” Bills said. “Many of the other teams we compete against, this is all they do. They just stunt. Our athletes are juggling a lot for the university, and they continue to be excellent.”

Rhode said that, like the other athletes in the Spirit Program, the dedication the All-Girl Squad displayed at the competition extends far past this competition.

“They've competed for just two years in the national stunt competition, and they've placed in the top four both times,” Rhode said. “They are an extremely hard-working and disciplined squad representing Texas Tech at the highest level in the classroom, community, on game days and at competitions. I could not be more proud of their accomplishments.”