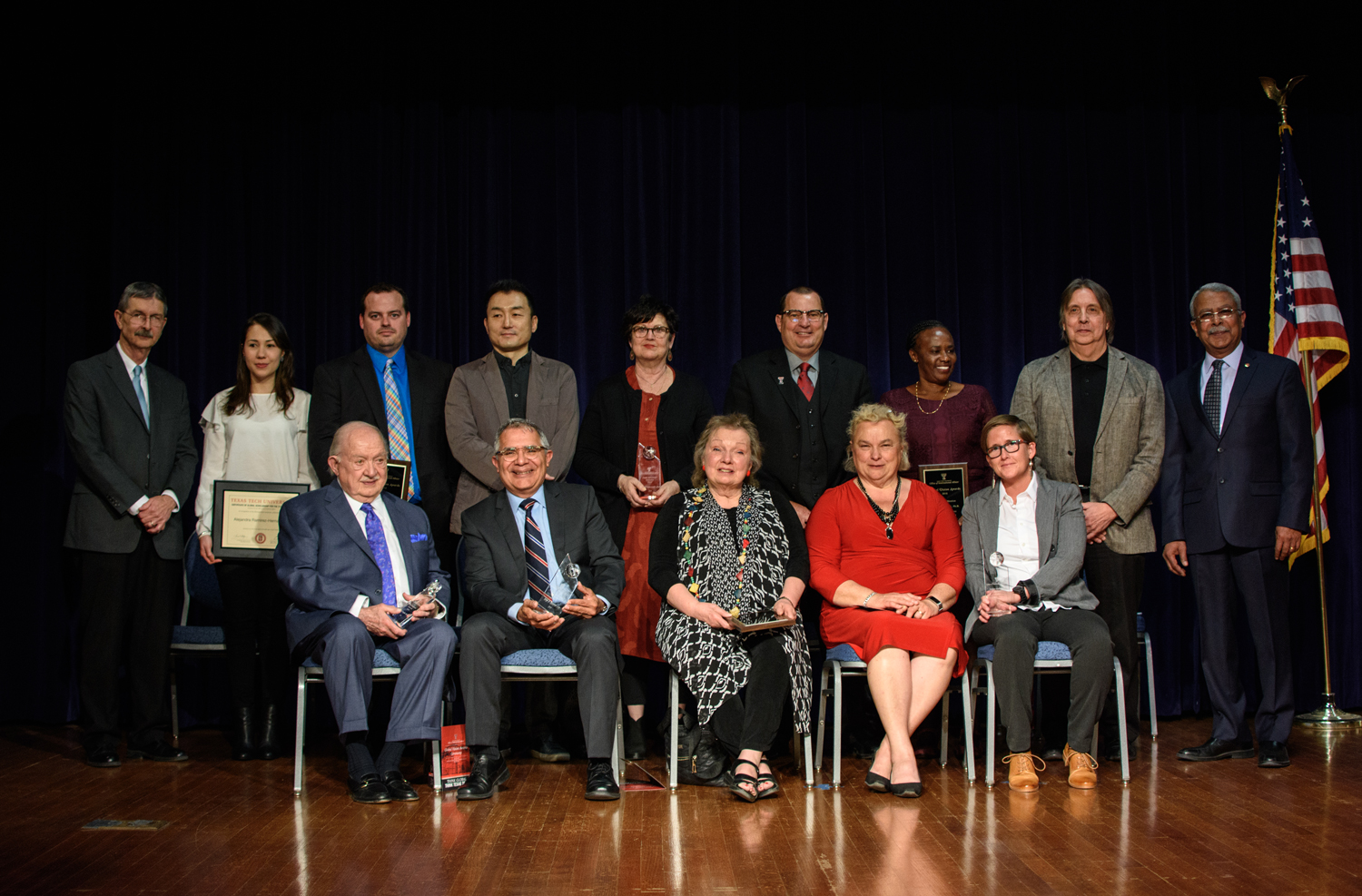 The Texas Tech University Office of International Affairs recognized 14 individuals and groups for their commitment to globalization efforts at Texas Tech and in higher education during the annual Global Vision Awards. Established in 2003, the awards show appreciation for each winner's generosity and continued support of Texas Tech's work to become more globally connected.

“The Global Vision Awards is among my favorite activities that we sponsor here in the Office of International Affairs,” said Sukant Misra, vice provost for international affairs. “It is a pleasure to acknowledge the diverse group of Texas Tech faculty and staff who have made a commitment to internationalization and transformed the scholarship and cultural understanding among peoples of the world.”

Each of the winners and runners-up received an award and a cash prize made possible by the Division of Institutional Diversity, Equity & Inclusion. Texas Tech faculty who led study abroad programs in 2017 were also recognized at the ceremony.

Award winners are chosen by a subcommittee of the International Affairs Council, which includes representatives from each college and several administrative units. 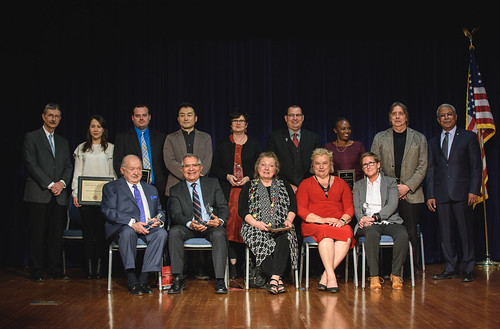 The Global Vision Lifetime Achievement Award recognizes an individual who has made extraordinary contributions to the internationalization of Texas Tech through his or her many years of leadership in promoting international scholarship and teaching.

Jorge A. Ramirez, the Walter and Anne Huffman Professor of Law in the School of Law, received this award in recognition of his professional and personal commitment to international engagement and outreach and an unwavering advocacy, commitment and support of the law school's international law programs and international law curriculum.

Ramirez was responsible for preparing the proposal and leading the approval process for the School of Law's first Master of Laws program, designed to serve international students who seek grounding in the U.S. legal system. In addition to his reputation as a leader and mentor to students and faculty, his teaching and research are recognized across the globe.

Janice Killian, a professor and chairwoman of music education in the School of Music, within the J.T. & Margaret Talkington College of Visual & Performing Arts, was recognized as the first runner-up for the award. Her work in music education has led her to present in recent years at international conferences in Greece and Uganda, and she will present at the 2018 International Society for Music Education meeting in August in Prague.

Killian invites doctoral students to travel with her, and they often co-author presentations and publications about their experience as they observe music and arts education in global settings.

The Student International Research Award recognizes international scholarship by a graduate student at Texas Tech and is based on the annual Graduate Schoolposter competition.

Alejandra Ramirez-Hernandez, an animal and food science doctoral student, was recognized as the first runner-up for her research evaluating the microbial profile throughout the chicken-processing procedure to assess pathogen prevalence and organism levels in three production facilities in Colombia.

The Global Engagement Award recognizes an individual or group that has made significant contributions to international understanding and engagement in the greater Lubbock community.

Idris Traylor received the award in recognition of his vision, tireless advocacy and significant contributions to the campus and local community in promoting the global vision and engagement. Traylor first arrived in Lubbock as an assistant professor of Russian history in 1965. Over the next 36 years, he served as director of the International Center for Arid and Semi-Arid Land Studies and executive director of the International Cultural Center.

Mary Murimi, a professor of nutritional sciences in the College of Human Sciences, was recognized as the first runner-up for significant contributions to the impact of Texas Tech across the globe. These include research conduct, student training and interaction with prominent stakeholders in academic institutions, including her collaborations with Kansas State University, the University of Arkansas, Texas A&M University and her work in South Africa, Kenya and Ethiopia and non-academic settings.

Kuhn Park, an associate professor in the College of Architecture, received the award for the international recognition and creativity he brings to study abroad programs. SeoulStudio, his summer study abroad program in Seoul, South Korea, has a rich, six-year history with the College of Architecture and produces some of the college's best design work, which is exhibited each fall.

Andrew Buchok, an instructor in the Wind Energy Education Program, which is housed within the within the National Wind Institute, was recognized as the first runner-up for his work in creating a high-quality international education opportunity that will leave a strong impression on the participating students. Buchok initiated a hands-on project in Nicaragua where he leads a group of students to design and install a renewable powered water system to a village that has well water available but no method to pump and deliver the water to the residents.

The award recognizes a tenure-track faculty member for excellence and sustained international scholarship.

Elizabeth Trejos-Castillo, the C.R. Hutcheson Endowed Associate Professor of Human Development and Family Studies in the College of Human Sciences, received the award in part for her past and continuing work pursuing international collaborations with universities in Brazil, Columbia, India, Costa Rica and Europe. Trejos-Castillo is currently working with foster children in Brazil on a Fulbright award.

Rich Rice, an associate professor in the Technical Communication and Rhetoric Program, housed within the English department in the College of Arts & Sciences, was recognized as the first runner-up for bringing his scholarship and knowledge of international communication research into the courses he teaches and sustaining a vibrant international scholarship agenda.

The College of Human Sciences received the award for consistently supporting the pursuit of international collaborations with universities around the world. Its professors are currently conducting international research in the study of neurocognitive and brain changes of PTSD children exposed to paramilitary violence in Columbia, the impact of toxic stress on the social development of children in Brazil,  and the effects of nutrition on cognitive development in Malawi, to name a few. They also have hosted notable international scholars from China, Sri Lanka, Columbia, Brazil, Russia and other countries.

The International Center for Food Industry Excellence (ICFIE) is the first runner-up for the award. ICFIE is a collaboration between the College of Human Sciences and the College of Agriculture Sciences & Natural Resources. It consists of more than 15 faculty members across five departments in the two colleges. The Center has received more than 45 grant awards, with several more proposals in process. ICFIE's international outreach includes four study abroad programs on three continents.

Gil Latz served as keynote speaker for the Global Vision Awards dinner and was the inaugural recipient of the Global Citizen Award, which recognizes a distinguished individual who has made significant contributions toward internationalization of higher education. Latz, the associate vice chancellor for international affairs for Indiana University-Purdue University Indianapolis (IUPUI), is well-known for his commitment to the internationalization of higher education.

The Global Academic Achievement Scholarship was also introduced at the Global Vision Awards dinner. The scholarship has been made possible through the generous support of campus partners.

For more information about the Global Vision Awards, visit the office's website.