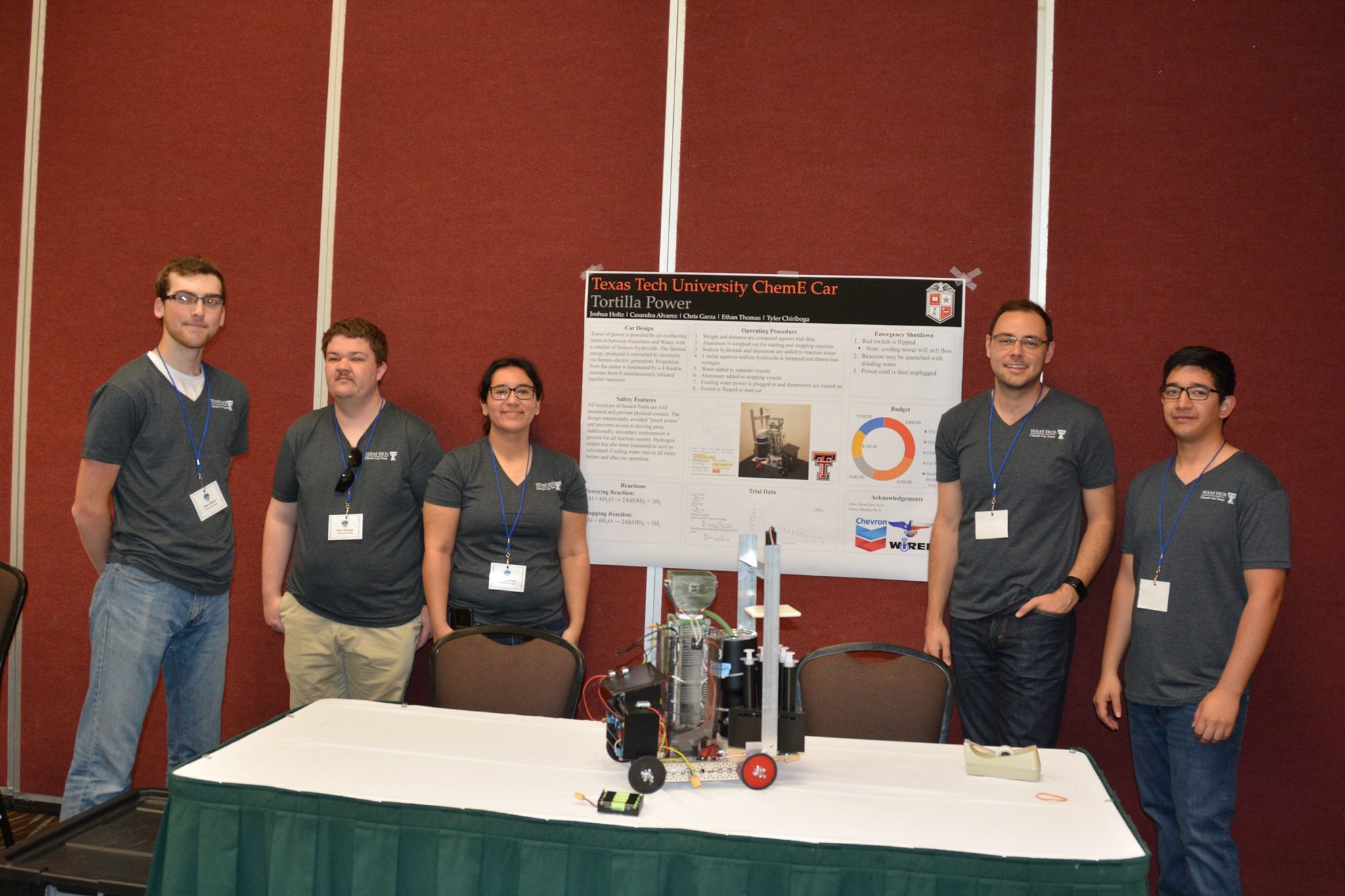 The students took home first place in the southwest regional Chem-E-Car Competition, earning a trip to nationals in the fall.

For the Chem-E-Car Competition, teams design and construct a chemically powered vehicle within certain size constraints. The vehicle also must be designed to carry a specified cargo. Teams don't know the distance the car must travel or the specified cargo it has to carry until the time of the competition.

“The range at competition is 15 to 30 meters, so it's anywhere from 50 to 100 feet your car has to travel, and you have two minutes to do it in,” said Joshua Holtz, team captain and a junior chemical engineering major from Houston. “It's a competition of precision. The given distance at regionals was 17.2 meters, or about 52 feet. On our first run, we stopped 10.5 inches from the line. Then, we stopped five inches past the line on our second run.”

The closest car to the Texas Tech car was 10 feet from the line.

“Our car was physically straddling the line,” said Tyler Chiriboga, a sophomore biochemistry major from Houston. “The closest team to us was about three meters away, maybe further. So, we were very precise compared to everyone else at regionals. Of course, at nationals, it's a game of centimeters.”

The Texas Tech car, lovingly named “Tortilla Power,” is unique in that it's powered by thermoelectric generators (TEGs) employing the Seebeck effect, in which an electric current is produced by a temperature difference, which is provided by having an exothermic reaction between water and aluminum on one side of the TEG and a flow of ice water on the opposite side.

To stop the car at the correct distance, the car uses the same heat-generating reaction in six simultaneous reaction vessels, and a median is taken to reduce variability. Each reaction vessel has an independently calibrated temperature probe and is polled 840 times per second.

The team's academic adviser, Jeremy Marston, an assistant professor of chemical engineering, couldn't be more proud of what the Chem-E-Car team has accomplished.

“These students have dedicated an extraordinary amount of time and effort into building a car for the Chem-E-Car Competition,” Marston said. “To win regionals, and by such a large margin, speaks to the caliber of work they do. I'm proud of their achievement, and I look forward to them continuing their success at nationals.”

The team swept regionals by not only taking first in the performance category, but also in safety and the poster competition.

At nationals, Tortilla Power will compete against 50 teams from across the U.S. as well as international teams from Canada, Israel, Saudi Arabia, South Korea and Qatar.

In addition to Chiriboga and Holtz, members of the Chem-E-Car team include:

The team also would like to acknowledge the financial support via donations from Chau-Chyun Chen, Jack Maddox Distinguished Engineering Chairman in Sustainable Energy and professor of chemical engineering, without which they could never have competed.