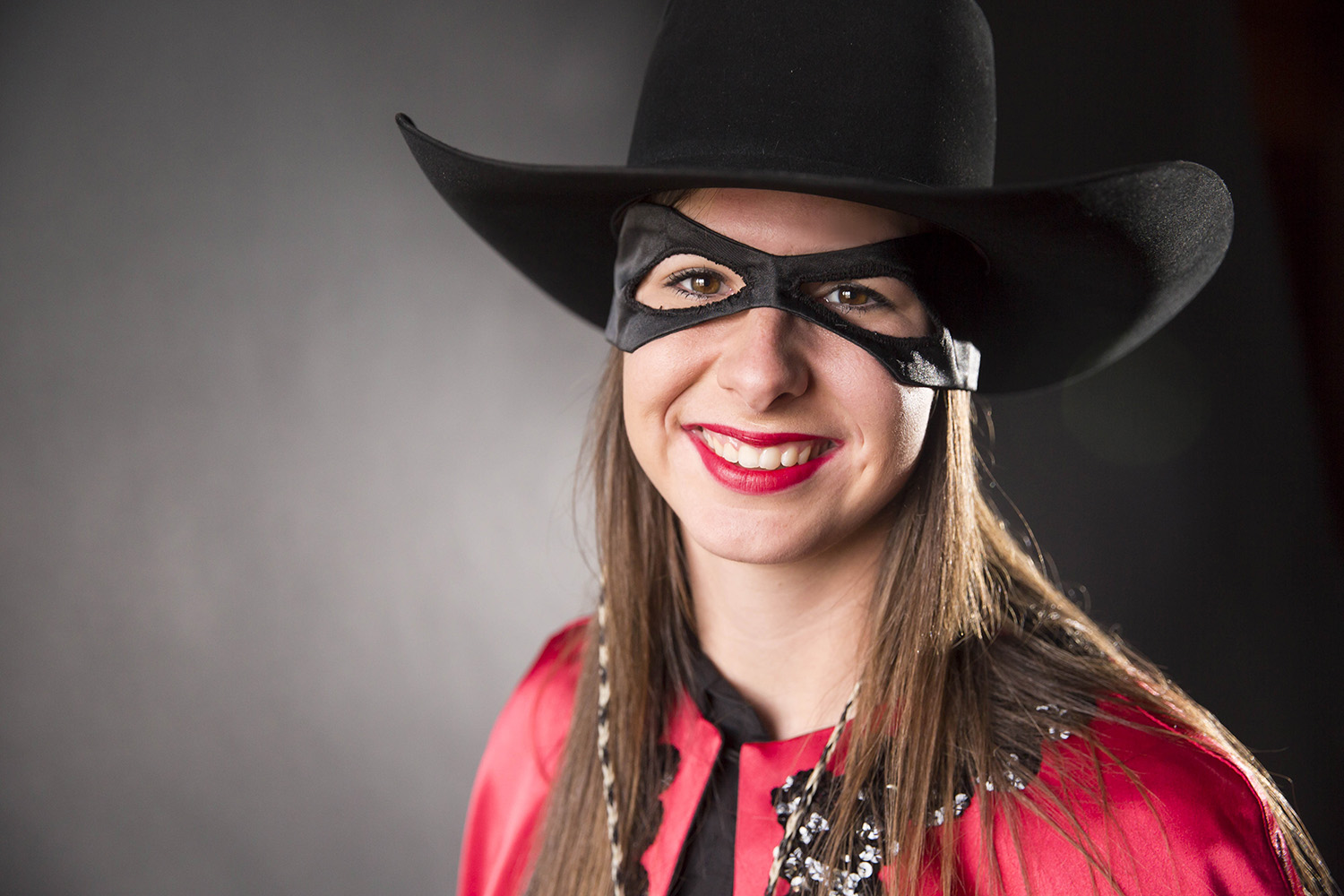 Lyndi Starr will serve as the 57th mascot for the upcoming academic calendar.

Lyndi Starr grew up around horses during most of her childhood, but it wasn't until she was about 14 years old that she really got serious about riding. When she heard about a 4-H clinic for horses happening at the Duke Riding Arena in her hometown of Mount Vernon, she decided to start by taking her family's horse to get a Coggins test, a procedure that checks for equine infectious anemia.

Up the road she went, on foot and leading her horse. She had no idea how to saddle, or ride, but she was determined to get there. She said she remembers getting some laughs when she finally made it to the arena a quarter-mile down the road.

“I said, ‘This is our most rideable horse,'” she recalled. “And they said, “Well, then why are you walking him?'”

Seven years later, with a list of awards and titles under her belt, you could say the Texas Tech University senior agricultural communications major has come a long way. Today (April 20) at the annual Transfer of Reins ceremony, she added another title: Texas Tech's 57th Masked Rider.

“Hard work pays off, I'll say that,” Starr said. “Just chisel away at your goal slowly and steadily. It may not happen in a year or two years, it may take four or five years, but if you work hard at it, you'll achieve it.”

After that first clinic, Starr began teaching herself about horses and riding however she could. Some of her first lessons came from Clinton Anderson horse training videos she'd received from the leader of the local 4-H leader, Debby Plantinga.

“Debby would give her videos and Lyndi would come in the house and watch them,” said Tammy Jaggers, Starr's mother. “She'd go outside and practice with her horse. Then she'd come back inside, watch some more and head outside again.”

Soon, she joined 4-H and began training with Plantinga.

“Debby taught her how to lunge, how to saddle,” Jaggers said. “Whatever Lyndi could get her hands on, she learned it. On her weekends, it was all about what she could learn about her horse.”

Starr went on to break her own horse, Blue, and then began entering events. In her first show in 2011, she and Blue placed third among 20 competitors. Her only goal in her next show, the Texas 4-H State Horse Show, was to win a ribbon.

In 2013, Starr and Blue were recruited to North Central Texas College (NCTC), where she competed as part of the stock horse team and the Intercollegiate Horse Shows Association (IHSA) Western Horsemanship team. In 2014, she received the American Stock Horse Association Collegiate Trainer Award and was named the 2014 Texas 4-H State Horse Show Stock Horsemanship Champion. A year later, she was named the IHSA Western Regional Reserve Champion.

“Her desire to be good regardless of her opportunities in the past was her strong suit,” said Bill Kaven, who was then an instructor in the equine science program and coach of the stock horse and western horsemanship teams at NCTC. “She always strives to be better. The passion she brought, along with her determination, is what allowed her to catch up and even surpass others in certain situations. She only had the one horse, but she'd ride all the time. She wanted to excel, and nothing was going to stop her.”

“What was actually good about that was when I started working with her and coaching her on formal riding, she was like a sponge,” Kaven said. “She just took to it like a duck to water without any struggle at all. That really says something about a person's athletic ability, to go from what they were doing and do something someone else wants, and not just do it, but excel at it.”

She was a fast learner, Kaven said, and not just about riding. Starr made sure she was learning how to properly take care of horses when it came to nutrition, exercise and every other aspect of good horsemanship.

“As she learned more, you could see her applying that knowledge to become a better horsewoman,” Kaven said.

Starr arrived at Texas Tech and began classes in College of Agricultural Sciences & Natural Resources during the fall of 2016. She joined the Ranch Horse Team, the Equestrian Team and the Horse Judging Team and began serving as the on-site resident for the Texas Tech Equestrian Center.

In addition to all of the responsibilities of each of these positions and a full course load, Starr began coaching a local FFA and 4-H horse judging team.

“I'm just so impressed with her,” Jaggers said. “She has worked her way through college, she's held down two jobs, has a full school schedule and makes it to all her horse shows. She's unbelievable. She follows her heart and her dreams, and the word ‘No' means nothing to her. If she wants it, she makes sure it happens.”

That perseverance was important last year, when Starr tried out for the Masked Rider program for the first time. Laurie Tolboom, not Starr, would go on to become the 2017-18 Masked Rider.

“I was pretty disappointed when I didn't get it, but at the same time they warned us that most people don't get it when they first try out,” Starr said. “So I took a break from it and focused on showing for the ranch horse team.”

She returned to the final round of the selection process this year with two more titles to her name, the 2017 Stock Horse of Texas Limited Non-Pro World Champion and Collegiate Limited Non-Pro Year-End Reserve Champion, and gave it another shot.

“I think it really kind of points to her perseverance and her determination,” Kaven said. “A lot of people wouldn't go back for a second round. Some people get turned off by that. Not Lyndi. When she puts something in her head, that's it, she's going for it.”

After the final interview process, Starr chatted with her mother over text as she waited for the results.

“God's will, not mine,” Starr texted back.

Like other tough times, that strength of faith was what got her through the process from beginning to end, Starr said. In the end, she said, it was meant to be.

“I had my phone in my hand the whole morning,” Starr said. “You know, I was hoping for the call. I never put my phone down.”

When she finally got the call from Spirit Program director Stephanie Rhode, she said she was overwhelmed with excitement.

“I started shaking, and I cried,” Starr remembers. “Then, it was kind of a blur because there's so much emotion. After I hung up, I went and told everybody who knew I tried out. Then it set in, and I was like, ‘Oh, wow I got it.' I'm still in shock, actually.”

As Masked Rider, Starr said she looks forward to cultivating a relationship with the public in person and online via social media. She also hopes to be a positive role model and leader to those who aspire to one day wear the mask and cape.

“I believe being the Masked Rider is about far more than attending football games,” Lyndi said. “I want to spread the school spirit that brings West Texans together as a family, and I want to inspire others to attend college, to set goals and go after them.”

She officially begins her time as mascot after today's Transfer of the Reins ceremony. Her friends and family say they couldn't be more proud and are already anticipating great things for the coming year.

“With her horse knowledge and her riding ability, she's definitely one of the best riders I've ever seen,” said Christy Petry, a graduate student in agricultural economics who also attended NCTC and competed with Starr there. “She is going to be amazing.”

Petry said Starr's journey to becoming the Masked Rider and the obstacles she faced and overcame also will contribute to her success in this role.

“She's come from not much at all,” Petry said. “She had a couple of bales of hay and $20 in her pocket when she got to Lubbock. Now, she'll be able to tell her story to kids and show them that if you want something and you work hard enough, then you can make your dreams come true.”