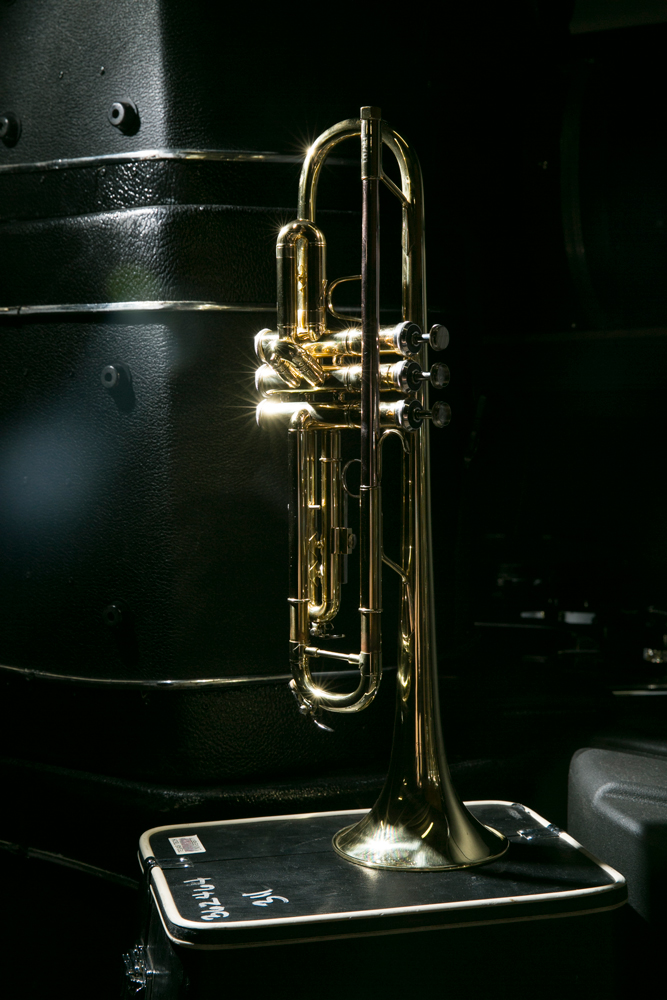 (VIDEO) It’s the second consecutive year every student in Andrew Stetson’s trumpet studio has been invited to the live rounds of the competition.

They've done it again. For the second year in a row, every student in assistant professor Andrew Stetson's trumpet studio has earned the opportunity to compete in the live, invitation-only rounds of the National Trumpet Competition.

Sixteen undergraduate and three graduate students from Texas Tech University's School of Music, housed within the J.T. & Margaret Talkington College of Visual & Performing Arts, will travel to the University of North Texas in Denton this Thursday through Saturday (March 8-10). Four of the students will perform as soloists, while others will perform as part of two large ensembles.

Stetson said having the entire studio invited to the competition shows the immense amount of work the students did and the dedication they each have. In December, students submitted recorded performances of the works they will perform live this week.

“I'm incredibly proud of them,” Stetson said. “This is not their regular class time. This is all outside of that, the recording process especially. A lot of people got to go home early as finals ended, but there were 19 students here, and we scheduled six hours every night to be in the hall recording. It's not a requirement, it's not something anybody is forced to do, but everybody did it and they were excited and willing to do it. I'm so proud of that.”

Stetson said while concentration on the performances technically begins in November, the work typically starts much earlier than that.

“It really is a whole team-building effort that begins as soon as we start up in the fall,” Stetson said. “We start at the beginning of the semester with classes getting together, doing fundamental things, just getting good trumpet sounds and making sure everybody's having a great time working together before the repertoire comes in. We really start in earnest in November with the actual repertoire. It's a full 45 days of rehearsing.”

A panel of judges reviewed the recordings over the holiday break and in January, it announced who advanced to the live rounds. Among those who will perform are students from institutions like the Julliard School, the New England Conservatory and the Eastman School of Music.

“Our name is right there with them,” said Jacob Diewald, an ensemble member and junior music education and music performance major from Plano. “It's a really cool chance to show them what we're doing here and to learn about what they're doing there. The chance to see world-class performers just having a good time with other world-class performers is a really incredible experience.”

Samuel Acosta, a soloist, ensemble member and junior music education and trumpet performance major from Leander, said he's most excited about his growth as a musician as he prepares for the competition.

“If I go about it the way I'm supposed to, and I prepare as much about it as I should, then I'm going to be a totally different trumpet player just from this process,” Acosta said. “That's exciting because it will contribute to my future. It's another feather in my cap, and it's just a really awesome experience in terms of growth as an individual and in ensemble play.”

Diewald anticipates the process of working with an ensemble like this will continue to have an effect on his work far beyond the competition.

“My job when I leave here is going to be helping kids find their voice through music and putting together a product they're proud of and that helps them express themselves,” he said. “Learning to do this myself and to work with other really great musicians and artists is great preparation for the future. It gives you more of a toolkit to work with when you're facing situations in the real world, and it just prepares you for the future.”

For Robert Luther, a doctoral trumpet student, the competition is the chance for him to experience his original composition, “Quickening,” played by an octet of his fellow studio members.

“It's exhilarating. Every rehearsal is wonderful,” said Luther, also wrote his first composition, “The Four Horsemen,” for the competition last year. “That was kind of a magical experience for me, because I'm not a composer. I'm not trained at all. I'm just a trumpet player who started writing.”

The group's second ensemble will perform Stetson's original arrangement of Gustav Holst's “Jupiter.” Stetson said while it's not uncommon to have an original work featured in the competition, it's pretty special to have an original piece by a student accepted, especially two years in a row.

“It's is a big nod to the music,” Stetson said, “and to the quality of what was written.”

While some of the performers are returning competitors, like Diewald, Acosta and Luther, others, like freshman music education major Shania Cordoba of El Paso, will compete with one of the ensembles for the first time this year. An architecture major who made the switch to music after one semester, Cordoba had heard that the entire studio had made it to the competition last year and would try again this year.

“I thought, ‘Oh wow, that's amazing, and I now have the opportunity to go through the process,'” Cordoba said. “It was a lot of rehearsal time, individual time and just communicating with other trumpet players. It was a lot of detail-oriented work, and when we heard we were all able to go, it was it was very shocking for me.”

Stetson said while the exposure for his current students is a big bonus, participating in the competition also gives potential students something to consider when deciding on a music program.

“Having this kind of success within the studio shows perspective students, ‘Hey, they're really serious about what they do, they're working really hard and I want to be part of something like that,'” Stetson said. “I think the fact that everybody is so willing to work together as a team toward this goal with everything else going on, every other class and their finals and still put in the good quality work, that's what I'm most proud of.

“That's what the arts really require, that's what teaching is going to require, and that's the great part of this. I think going through this process, everyone who is going to graduate is going to be ready to put in the hours and do all the hard work as teachers when the time comes.”

Soloists for the competition are:

For more information about the National Trumpet Competition, visit the event website.