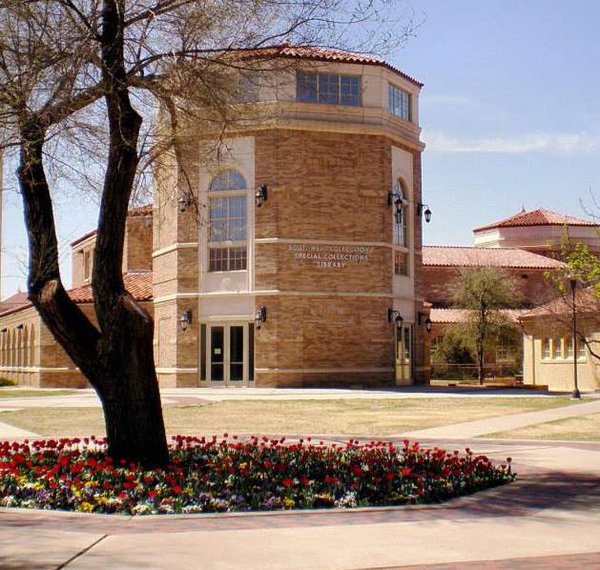 “From Here, It’s Possible: West Texas Goes to the Stars” is on display through June.

The Texas Tech University Southwest Collection/Special Collections Library (SWC/SCL) has opened its newest exhibit, “From Here, It's Possible: West Texas Goes to the Stars,” showing the breadth of Texas Tech's connections to NASA.

The exhibit honors Texas Tech alumni who went on to work for NASA, as well as former NASA employees who now work at the university. It features images of astronauts in space or in training, a timeline of the featured individuals' tenures at NASA, a moon globe, a replica of a plaque left on the moon, books written by and about the people in the exhibit, and a facsimile of a painting by Astronaut Alan Bean.

Oral histories from West Texas-based moon-walkers and mission control specialists are included as well as a video from NASA in which the astronauts of the Columbia mission discuss the educational aspects of the flight.

Items from the SWC/SCL's Rick Husband Collection and items loaned by the Willie McCool family are on display, including a jacket worn by Husband with his name and other patches sewn on, a model of the Columbia spaceship and a poster of its liftoff,  a nameplate belonging to McCool and several mission patches.

“Texas Tech University and West Texas are not often associated with NASA, even though members of our Board of Regents, college deans and numerous alumni have had notable careers there,” said SWC/SCL archivist Robert Weaver. “Texas Tech graduated space shuttle Columbia's commander Rick Husband from our engineering program. Ginger Kerrick was NASA's first non-astronaut capsule commander and flight director as well as the first Hispanic female to hold those positions. She received her bachelor's and master's degrees in physics from Texas Tech. And the list goes on.

“The Southwest Collection/Special Collections Library contains archival collections and oral histories documenting the lives and careers of these individuals. Exhibiting these felt like an excellent way to honor their contributions and raise awareness of the unique items available here at the archive.”

Featured in the exhibit are:

The exhibit and video are on display in the East Rotunda of the SWC/SCL, the entrance closest to the University Library, through June. The exhibit is free to attend, and the building is open from 9 a.m. to 5 p.m. daily with extended hours during the semester.

Alumnus Launching to Space Station Has Plenty of Peers