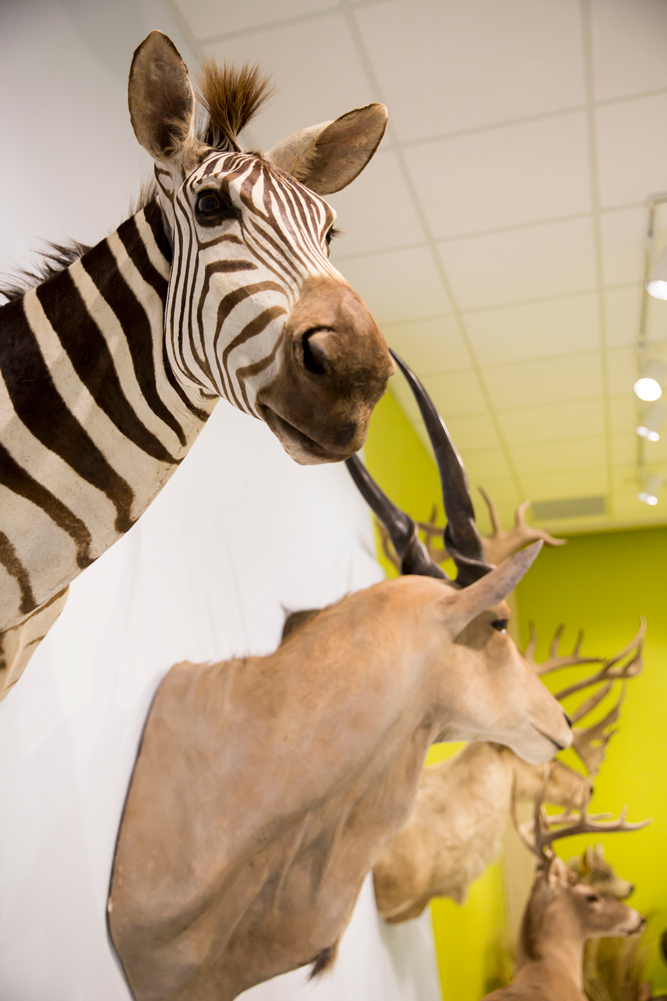 Specimens from the Natural Science Research Laboratory taxidermy collection are featured in the new exhibit, including a massive elephant specimen donated 35 years ago.

Native grasslands once covered nearly half of the contiguous United States. As the human population in the U.S. has grown, much of the prairie land has been replaced by crops and urban areas.

But why are these North American grasslands important? How do they compare to the grasslands in other places like Africa? And why is the biodiversity, or lack thereof, of each important?

These are the questions the Museum of Texas Tech University intends to answer in the exhibit, “From the African Savannah to the North American Grasslands: A Comparison of Mammalian Biodiversity and Natural History.”

“In this exhibit, we look at the biological importance of grasslands in the two continents, how they are similar and how they differ,” said museum director Gary Morgan. “For example, why are there so many more species of mammals living in African grasslands than in the United States?”

The exhibit was developed by the museum with funding support from the Helen Jones Foundation, Inc., and features the underutilized and little-known taxidermy collection of the museum's Natural Science Research Laboratory (NSRL).

“I like that this exhibition is so rich in specimens from the museum's own collections,” Morgan said. “Many of these specimens have not been on public display before. Their origins are varied, but many have been donated by friends of the museum, including those who have hunted big game in Africa.”

NSRL director Robert Bradley said the exhibit, which has just over 30 specimens, is just a fraction of the laboratory's mammal and taxidermy collections.

“The NSRL has one of the largest collections of mammals in the United States,” Bradley said. “We have about 138,000 mammal specimens. Most of that collection is research material scientists and faculty members at Texas Tech have collected over the years.

“The taxidermy collection represents a small fraction of that. We probably have less than 1,000 taxidermy specimens. That collection is not used very often for research, but it has an extremely valuable and important educational component. For example, we use it in the classes we teach on the main campus, like biology, natural resources management and mammalogy classes.”

In addition to students at Texas Tech, children and adults of all ages will be able to see and learn about these rare and charismatic species, including many herbivores and carnivores of the African Savannah and the North American prairies. It will also give them the chance to ask about other issues related to these animals and their natural habitats.

“The best part about museums, the goal, is to show you something, to give you some data, tell you a story, then make you ask your own questions,” Bradley said. “I think one of the great things about this exhibit is the tangential information we're able to discuss, to bring up some topics people oftentimes don't think about.”

“The elephant is really cool just because of how big he is,” Bradley said. “You see pictures of elephants, you see elephants on TV, but until you get up close to this guy, you don't realize, ‘Holy cow, these things are huge.'

“The giraffe is the same way. We tried to mount him lifelike in terms of how tall he would be, and we didn't have room to do it. The top of his head and the top of the elephant, both of those are actually higher than we could put them. To me, that's amazing, just how big they are. When you stand underneath them, you think, ‘Oh my goodness, they're enormous.'”

Venturing further into the exhibit reveals animals of all sizes, familiar and unknown, from the dik-dik, an 18-inch-tall African antelope to a bison. Bradley said the specimens come from all over Africa and North America and were chosen based on the theme of comparing the mammal biodiversity in each area.

“What's really neat about this exhibit is how few big-bodied species there are in North American grasslands compared to Africa, and that's kind of the big focus in this exhibit,” Bradley said. “If you look at North America, we have the American bison and that's it. Yes, we have a few species of deer, like the white-tailed or the mule deer.

While plans for the exhibit began with 50 to 60 specimens, Bradley said the exhibit started with just 34 when it opened. That number may continue to change as they receive feedback from visitors and as more material from other collections arrives, like an upcoming shipment from Florida that is expected to contain a hippopotamus.

“We're hoping there will be a handful of things there that would be nice to add to this exhibit,” Bradley said. “Exhibits are never really done. They continue to evolve and even as a curator in charge of an exhibit, you put it all together and you look at it and go, ‘Oh, we should have done this, or we should have done that.' I would like to have as many things out here as possible because the goal is to let kids and adults be exposed to biodiversity, to be exposed to some of these really cool animals and species they don't often get to see.”

In addition to allowing visitors a chance to see these animals, the exhibit provides a chance to discuss related issues like adaptation, conservation and hunting. How do these species coexist in the grasslands? What advantages do legal safari hunts have to nearby communities? What responsibility do humans have in regard to these animals and their habitats?

Bradley said information within the exhibit pushes visitors to think about these topics, formulate their own questions and continue the learning process on an even bigger scale.

“It's thought-provoking, and that's what education is really all about, it's what universities are about,” Bradley said. “They give you some information and have you go off and think of your own questions. Any time you learn something new, when you get some new data, you stop, you think about it and you adjust. That's the way science should work.”

Some parts of the exhibit may make some visitors uncomfortable, but Bradley said that also is part of the educational process.

“As humans, we're all responsible,” Bradley said. “Our job as humans is to try to protect things that are threatened and endangered, to try not to destroy all the habitats, to try to make room for all the biodiversity and to try to be sensitive.”

Morgan said the grasslands exhibit is one way of reminding visitors that the future of the planet rests in their hands.

“We are stewards of this world and all of its biodiversity,” Morgan said. “The elephant head in the exhibit is a spectacular animal, almost unbelievably huge. But a human can kill that animal so easily. It is a metaphor for what we could do to the Earth if we are not aware that we and all of the animals and plants are part of one great ecosystem. We are dependent on each other to survive.”

Added to the Museum of Texas Tech University in 1972, the NSRL is home to more than 5 million animal specimens, one of the largest collections of its kind in the country.