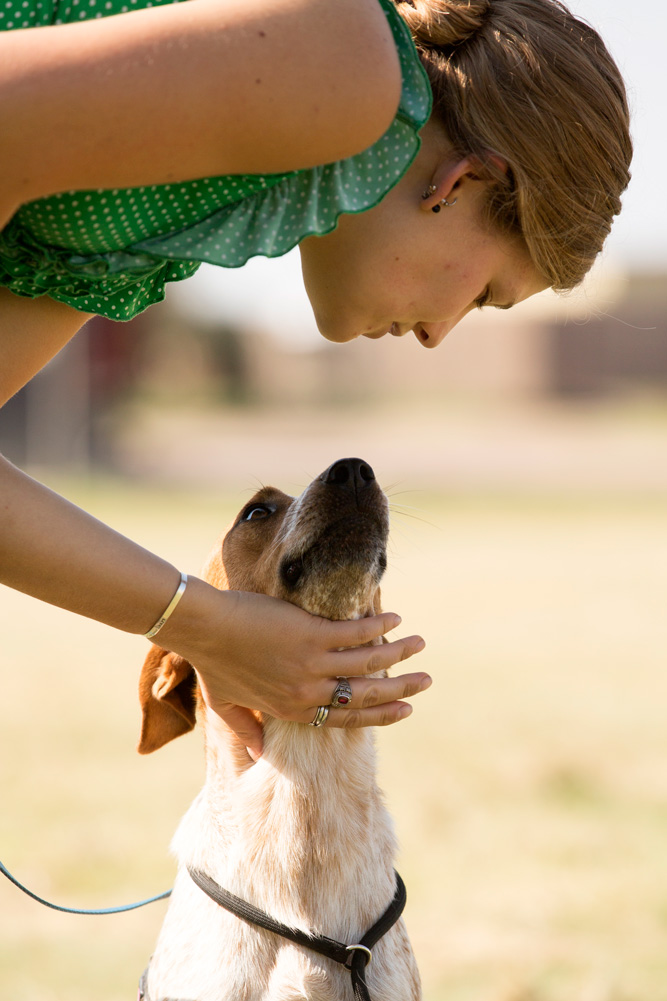 The speckled canine with large brown patches circled Nathan Hall with precision and determination. The dog has the prototypical look of one whose ancestors have chased thousands of birds during various hunting seasons.

This dog, however, was on a more immediate mission – finding the bag of treats Hall had sitting next to him on the steps of one of the facilities at the Texas Tech University education and research farm. It didn't take long for the pooch to locate the bag of goodies, forcing Hall to hide them a bit better so the dog could not get to them without the treat coming from Hall's hand.

Of course, it shouldn't be surprising. The sense of smell is one of the strongest traits in any dog. But how much is really known about a dog's sense of smell?

“You can have a super sensor on the front of your face, right?” said Hall, an assistant professor in the Department of Animal & Food Sciences in the College of Agricultural Sciences & Natural Resources. “He may have an absolutely fantastic sense of smell, but the question is, how much of it is he using all the time?”

That is just one of several questions Hall and other researchers ponder while working with numerous four-legged friends at the Canine Olfaction Laboratory. The answers to their research could eventually lead to breakthroughs such as developing more nutritious or desirable types of dog food or improving the abilities of canines that serve with law enforcement or in the military.

But, like humans, dogs have their preferences. While humans usually make their choice by sight and feel, dogs use the one sense that is superior to all others – smell.

Consumers, however, usually choose a dog food based on its ingredients or nutrients. Dogs don't usually get that choice unless they turn their nose up at it. That is part of the focus of research for Hall.

To get there, however, requires understanding the basic workings of the canine olfactory system and breaking it down to its basics, not just for the normal house pet but for all types of dogs. That is where the Canine Olfaction Laboratory comes into play.

The lab, renovations to which were completed this summer, has capacity to house 12 dogs and has two play yards, one behavioral training room and a controlled lab where odors are created. The dogs take part in an extensive behavioral and enrichment program that involves group play time twice per day in the large outdoor yards, numerous leashed walks per day and relaxation time in the offices where students work on their computers.

There is no restriction on dog breeds – most there now are mixed-breed dogs of some sort – but they do avoid puppies because they are already the most adoptable. Hall said they do look, however, for dogs motivated by food rewards and those that may need some additional help to get adopted.

The initial group of eight dogs chosen for the study came from The Haven, a non-profit animal care shelter located outside of Lubbock. That group of dogs graduated from the program – receiving their “Ph.Dogs,” in December, where they returned to The Haven. Five of them have since found forever homes through adoption and the other three are still available for adoption. A new group of eight dogs are currently in the program.

Aside from discovering crucial scientific information about dog preference and the olfactory system of the dogs, the purpose of this program is to provide the behavioral rehabilitation service to shelter dogs and ensure that all find wonderful homes.

“We do go outside of performance dogs and working dogs and just look at how dogs naturally use their noses,” Hall said. “What are they using them for? When they're sniffing around on the ground when you take them for a walk, what are they getting out of that? What kind of information is there?”

Hall and other researchers can create their own odors in their lab and then will plant those odors at various fields in and around the farm.

Not only can researchers perform studies where dogs seek out different types of odors, they can also adjust the concentration of those odors to see how strong or weak the smell can be before the dogs detects it.

The other aspect of the program is to provide behavioral rehabilitation to the dogs.

Alexandra Protopopova is an assistant professor in the Department of Animal and Food Sciences and, like Hall, is fairly new to Texas Tech. Her expertise focuses on shelter dogs and their behavior, which often can determine which are more likely to be adopted.

“The program serves the purpose of helping dogs in the community because these are shelter dogs that need a little bit of behavioral help,” Protopopova said. “Some dogs come in with not a whole lot of experiences with people, so they might be more fearful than usual.

“They also might not be as knowledgeable about certain commands or behaviors or how to live in a home, so this is what students provide for these dogs. They teach them what it is like to be on a leash, what it is like to go home.”

Protopopova's research sometimes can be a simple as determining which toy a dog prefers to play with. While that may sound basic and simple, it can have a huge effect in helping a dog get adopted. People are less likely to adopt a dog when going through a shelter if the dog ignores a person who is trying to engage in play with the dogs, and giving the potential adopter the right toy to attract the dog can be crucial.

Because of the newness of the Canine Olfaction Lab, Hall, Protopopova and other researchers are just getting started on what could become a very important research tool to understand canine behavior and welfare. The main research aims are to aid in the training of detection dogs and gain a thorough understanding of what our best friends like and why. The mission of the program is to also provide a service to the community through the rehabilitation of shelter dogs and to encourage appropriate and ethical dog ownership which includes adoption of dogs from animal shelters and discourage backyard breeding.

“This is a very unique opportunity for students, for dogs and for the community,” Protopopova said.

Counseling Psychology Program Ranked No. 2 in the Nation