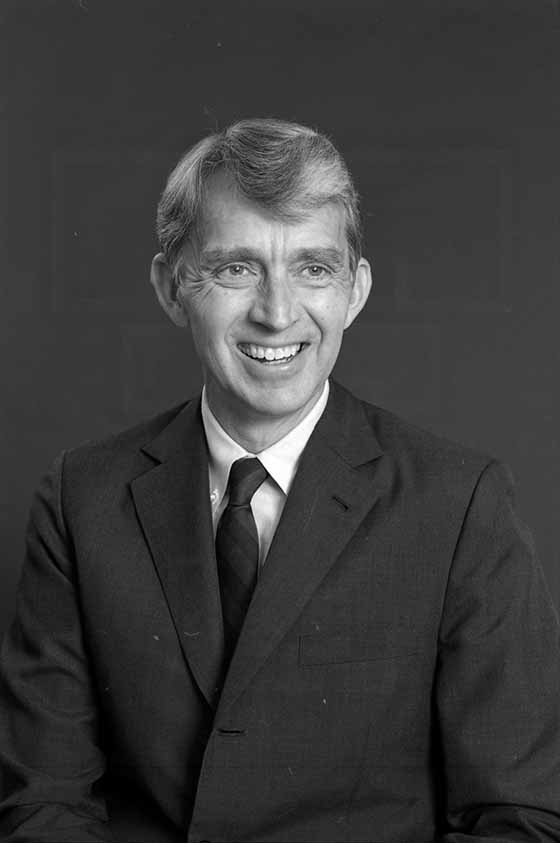 Cecil Mackey presided over the early years of the Texas Tech School of Medicine.

Cecil Mackey, who served as the ninth president of Texas Tech University from 1976 to 1979, died on Feb. 8.

He came to Texas Tech from the University of South Florida (USF), where he had served as president since 1971.

At USF, Mackey helped establish a new medical school, which made him an excellent candidate for Texas Tech upon the retirement of Texas Tech's eighth president, Grover Murray. The Texas Tech School of Medicine, created by the Texas Legislature in May 1969, had opened its doors in Drane Hall on Aug. 21, 1972, with 36 freshmen and 25 juniors. It expanded its clinical facilities in 1973 into Thompson Hall.

When Mackey took office as Texas Tech's new president on Sept. 1, 1976, the School of Medicine had just celebrated its third graduation ceremony. The School of Pharmacy had been approved in 1974 and the School of Nursing in 1975, so it was a growing time.

Texas Tech had 22,500 students and 5,000 faculty and staff members. It had six colleges – Agricultural Sciences, Arts & Sciences, Business Administration, Education, Engineering and Home Economics – in addition to the School of Law, School of Medicine, School of Pharmacy, School of Nursing and the Graduate Schools.

But that growth had come at a price. Murray was infrequently on campus because he was out promoting the university.

Mackey, on the other hand, vowed to be highly visible around the university.

“If he can't be found in his office, where he claims an ‘open door policy' will exist, or if he can't be seen talking with students in the dorms or meeting with student leaders and faculty, he may be seen hovering over campus in his hot air balloon, zipping along on his motorcycle, jogging in the early morning hours or maybe snapping photographs on campus,” according to the student newspaper, The University Daily, on July 19, 1976, just two days after Mackey's appointment.

Mackey's promised presence in Lubbock served two purposes: making him more accessible to the campus community and putting a greater emphasis on development within Texas Tech.

“Mackey understands that Tech has grown rapidly and moved aggressively,” wrote Melissa Griggs, editor of The University Daily, in a July 28, 1976, article. “Dr. Grover Murray did much for Tech in the way of expansion. By serving on national committees and through his travels, he spread the name of Texas Tech.

“But the prevalent attitude on campus is no longer one of the need for expansion. It is one of polishing what Tech has and establishing the university's academic excellence. Mackey understands this, I believe, and says he expects to be actively involved in the academic advancement of the university.”

One problem from Texas Tech's rapid growth was a lack of space. On Mackey's first day in office, The University Daily printed letters to the editor from students in Bledsoe and Sneed Halls about how cars with valid parking permits were being towed out of their lot because dozens more permits were issued than the number of available spaces.

Just four weeks later, Mackey attended his first meeting of the Board of Regents in his new role. At that meeting, he was asked about reports of students who were unable to enroll at Texas Tech because they could not be housed in the residence halls as university policy then required for all freshmen and sophomores.

The minutes from that meeting recorded that Mackey intended to seek recommendations about the feasibility of changing that policy. At the board's Feb. 18, 1977, meeting, they voted to amend the policy, requiring students to live on campus for either two regular semesters or the time it took to complete 32 semester hours of academic credit.

To keep up with the number of students, construction continued on a variety of campus projects throughout Mackey's tenure as president, and 1977 was a particularly booming year. Within his first year, new projects were approved for the construction of the Mass Communications building, now the Maddox Engineering Research Center; the Social Sciences addition to Holden Hall; the Recreational Aquatic Center; a student recreation building; agricultural field laboratories in Lubbock County; research and teaching space in the College of Engineering; the Textile Research Center; and the agricultural pavilion.

In October 1977, the Board of Regents put Mackey in charge of filing an application with the Corporation for Public Broadcasting for the installation of a receive-only ground terminal, with related facilities and services, and designated him as the authorized representative to act in connection with the application.

In December, the board approved the construction of a ticket office at Jones Stadium, an addition to the Electrical Engineering building for research and instruction in research, and a storage facility for hazardous materials in the Chemical Engineering and Petroleum Engineering buildings. Renovations also were approved for the Animal Sciences building, Sneed Hall and the former Library building, which was becoming the new home for the Department of Mathematics. Mackey was given the authority to manage the contracts on all projects and instructed to undertake a feasibility study for the renovation of West Hall.

When the study was completed, the Board of Regents gave Mackey the green light on that project as well.

So great was the expansion that in September 1978, the board had to approve a resolution about small classes: “The offering of small classes is a matter of academic and economic concern, and shall be engaged in only when appropriate justification is offered.”

Mackey had good news for the board: Research activity at the university was up nearly $4 million from the previous year, and nearly 20 percent more proposals had been funded. Enrollment for the fall had reached an all-time high of 22,721 students.

Chosen because of his record of success in leading a university with its own school of medicine, it seemed Mackey had done his job when the Texas Legislature officially designated the Texas Tech University Health Sciences Center on June 6, 1979.

The following day, he accepted a position as the 16th president of Michigan State University, where he would remain for the rest of his career, and indeed, his life.

Mackey also served in the Lyndon B. Johnson administration as assistant secretary for policy development for the U.S. Department of Transportation, director of the Office of Transportation Policy in the U.S. Department of Commerce and director of the Office of Policy Development for the Federal Aviation Agency. In the John F. Kennedy administration, Mackey served as assistant counsel to the Subcommittee on Antitrust and Monopoly for the U.S. Senate.

Mackey is survived by his wife, Clare; daughter Carol Shaffer of Dallas; son John Mackey of Honolulu, Hawaii; daughter Ann Kling of Las Vegas, Nevada; and grandchildren Hannah, Albert, and Sophia Mackey, and Lauren and Katherine Kling. He was preceded in death by daughter Jane.