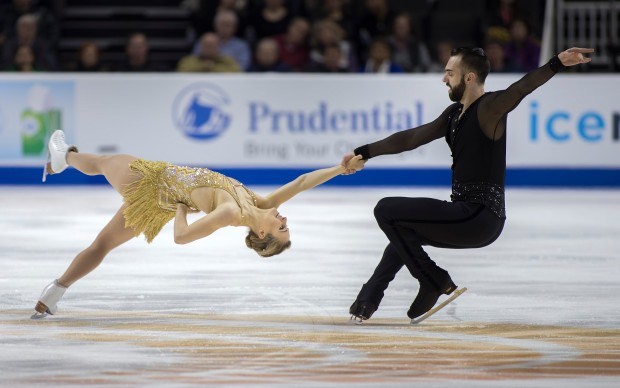 There is a sense of wonder when skating on ice, watching as the metal from the blades turn it from a smooth, frozen canvas into an Etch A Sketch filled with swirling figure eights and loops as if hand drawn by a calligrapher.

The drive, patience and talent once must possess to ice skate with ease is tremendous. Euless native Ashley Cain, a high school graduate of Texas Tech University's TTU K-12 distance learning programs, was born with it.

Practically raised on the skating rink, Ashley grew up infatuated with figure skating.

“My mom, Darlene, is originally from Canada, and my dad, Peter, is originally from Australia,” Ashley said. “My dad competed in ice skating during the 1980 Olympics for Australia, then he met my mom while they were both performing on the same ice skating tour. After they settled down to be skating coaches in Texas and had me, I was always at the rink. While there, I'd watch all the older skaters. I wanted to be out there and be doing what they did because they looked so fast and beautiful.”

As Ashley's passion to pursue ice skating increased, so did her commitments and practices. In 2009, when she was just 12 years old, Ashley made Team USA, and her schedule called for her to miss an extraordinary amount of days at a traditional school.

When it came time to enroll at her local high school, it became clear her ice skating dreams and a traditional school path didn't mesh.

“I was going to go to Coppell High School and, at the time, there really weren't any elite athletes in the area,” Ashley said. “The amount of training I needed to do in order to be on Team USA and be on the national level, I couldn't really do that and go to school full time, too. So, about a week before school was starting, my parents and I went into the school and said, ‘This is the amount of days I'm going to miss,' and they said, ‘It's not possible. You can't miss that many days.' So, they referred me to the Texas Tech's TTU K-12 program, which was great.”

Completing her Texas high school diploma and following her ice skating ambitions simultaneously made Ashley more independent and focused in both areas.

“Getting my degree through TTU K-12 allowed me to train at the level I needed to, and it also taught me discipline because I couldn't get behind on my lessons,” she said. “I had to finish my lessons on time. It made me really independent because, even though I had teachers online, I still had to figure a few things out on my own, too.

“It was good for me because, when I was in actual school, I would miss a lot of things and then have to make a lot of things up in the early morning. That was hard for me because then I was tired for training later in the day. With TTU K-12, I could train, get off the ice, do my schoolwork, get back on the ice to train more, then go home and finish my schoolwork. It made a really good balance.”

Skating for Team USA, Ashley traveled extensively while also finishing her schoolwork. During her time abroad, she was able to connect to her history lessons.

“The really cool thing about traveling so much while taking my classes was, when I was in my history class, I was going to Moscow and reading about Lenin's tomb on the way there,” Ashley said. “I was reading all about it, doing work for it and everything and, when I got to Moscow, I was able to see Lenin's tomb in person. I was actually getting to see everything that was in my history book, so that was cool.”

Ashley has always been a bit non-traditional, not only with her schooling, but also with her ice skating.

“I'm one of a few who competes in both singles and pair skating,” she said. “I medaled in singles and pairs at Nationals for Team USA in 2012, but then my partner and I split that same year and I just did singles for four-and-a-half years.”

In 2016, Ashley found a new partner in Timothy LeDuc. The pair clicked instantly and have since competed in recent tournaments. They placed third at the 2017 U.S. Figure Skating Championships, earning a bronze medal.

Though the pair didn't qualify for the one open pair skating spot for the 2018 Winter Olympics, they were named as alternates and will continue training for it.

Ashley and Timothy also represented the United States at the Four Continents competition Jan. 22-27 in Taiwan. The competition had skaters from the Americas, Asia, Africa and Oceania, which includes Australia and New Zealand. The pair placed second, earning a silver medal.

As for other kids who want to become star athletes but also want a solid education, Ashley had some words of advice.

“I think it's really important to always keep your sport and school even,” she said. “For me, I had to find that balance of doing my schoolwork and also giving 100 percent to my sport at the same time. I think that's what's most important.”