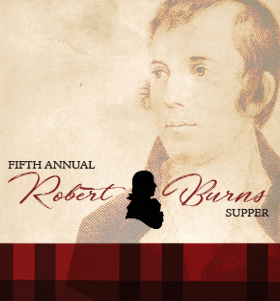 The event, which will include a prime rib dinner and samples of Scotch whisky, serves as a celebration highlighting Scottish heritage and the legacy of Scotland's Poet Laureate Robert Burns. The evening also will include readings of Burns' poetry, storytelling and traditional Scottish musical performances by Ed Miller and the Piper Jones Band. Attendees are encouraged to wear traditional Scottish attire.

Bryan Sutton, a professor at the Texas Tech University Health Sciences Center; Patrick McLaurin, an instructor in the Department of Chemistry & Biochemistry; and Edson Way, hospital chaplain at Covenant Health System's Hospice of Lubbock, have organized the Burns Supper in Lubbock for the past five years.

The tradition of a Burns supper began in 1801 and usually occurs near Jan. 25, Burns' birthday. The suppers are held around the world, and like the one at Texas Tech, usually include the recitation of the Selkirk Grace, a prayer attributed to and made popular by Burns, and “Piping in the Haggis.” The latter involves guests standing as a piper plays the bagpipe and a platter of haggis, Scotland's national dish, is brought in.

Way said in the 217 years since the phenomenon began, a strong tradition of certain components have developed that make each event a “real Burns night.” The supper at Texas Tech will observe all of those traditional elements, he said.

“All of it will be included, from the welcome, to the grace, to piping the haggis into the dining room and addressing the haggis with Burns' poem of praise, to a memorial lecture on some aspect of Burns' life and work, followed by a toast to the lassies from one of the gentlemen and a response from one of the ladies” Way said. “These latter two toasts are always fun and irreverent. The concert of Scottish songs in the theater following the dinner will surely bring the people to their feet, and possibly a tear to the eye, as we sing Auld Lang Syne to close this special evening.”

Tickets to the supper are $68.75 per person and may be purchased at United Supermarkets, Dollar Western Wear, Ralph's Records or through Select-A-Seat at (806) 770-2000 or www.selectaseatlubbock.com.