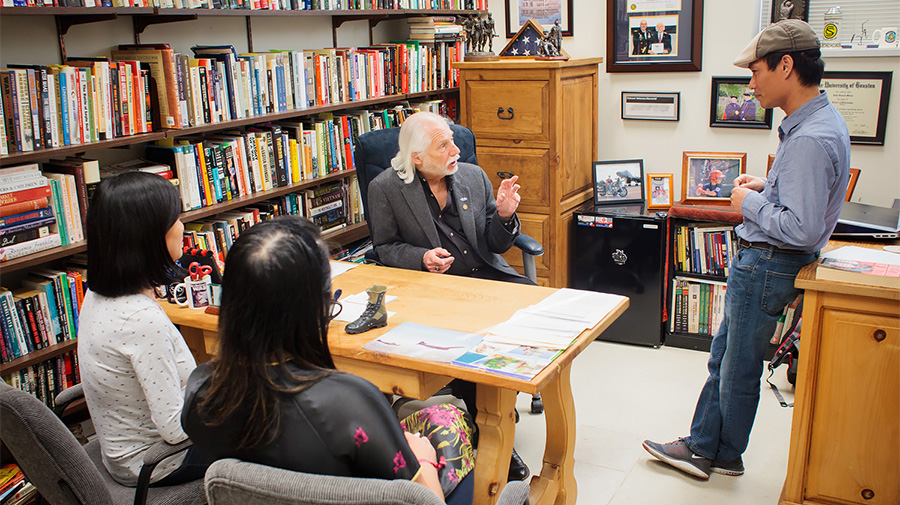 (VIDEO) Though the United States left Vietnam nearly 50 years ago, the war's veterans are still dealing with its consequences.

Cancer. Complications from exposure to Agent Orange. Post-traumatic stress. Though the United States left Vietnam nearly 50 years ago, the war's veterans are still dealing with its consequences.

“Sadly, what we're finding is that Vietnam veterans are dying at an alarming rate in terms of their age, because most of them are just approaching 70 years old,” said Ron Milam, associate professor of history and interim executive director of the Texas Tech Institute for Peace and Conflict.

As Vietnam veterans reach the last stages of their lives, many start to open up about the trauma they experienced during the war. To better assist those veterans in hospice, the Hospice of Lubbock at Covenant Health reached out to Milam to educate its caregivers on the history and controversy of the Vietnam War.

“That's how it started,” Milam said, “and then they followed up with questions like why are the veterans wanting to talk now? So I tried to explain that some of the issues and some of the guilt feelings that many veterans feel.”

Milam said many Vietnam veterans can struggle with moral injury, or the trauma done to a person's conscience if he fails to prevent or commits an act that betrays his own values.

“I tried to explain some of those feelings,” Milam said, “and why it was a little bit unique in terms of wars that America has fought in that we lost that war. In the process of losing that war, there were a lot of guilt feelings that soldiers came back with, so that was really what the focus was.”

Vietnam was an “unpopular” war long before America pulled out of the country. There was no known enemy in this war, no Nazism to defeat or other clear focus. As soldiers began returning home from their tours in Vietnam, society began to treat them differently. There were protests against the war, rather than welcoming veterans home as heroes, many treated them as almost villains. When the war was over in 1975, Milam said, the change became even more noticeable.

Milam said it's important for caregivers, whether professional or family members, to understand and be able to acknowledge and respond to the trauma the veterans went through.

“Some of them will hear things from those dying veterans that they didn't know,” Milam said, “that they'd never even mentioned in the previous 40 years. If you're not at least aware of some of the difficulties of what these men and women have been going through for perhaps the last 30 - 40 years of their life as a result of what happened to them in Vietnam, then it's hard to respond to them about the things that they're raising.”

“I think as a result of being treated differently, they started responding to society differently,” Milam said. “So as a result of that, we saw a lot of veterans sort of go underground, and not want to talk about having been in the war”

Milam, who is also a combat veteran of the Vietnam War, spent 27 years in the oil and gas industry before earning his Ph.D. in 2004. During his studies at the University of Houston, he took courses on the war and realized an important piece was missing from the curriculum.

“Nobody was talking about soldiers,” Milam said. “They were all talking about what happened in Washington, Saigon and Hanoi. Nobody seemed to remember that there were soldiers on the ground.”

Milam realized that few people were writing about soldiers' experiences academically, so he began studying the behavior of both American and Vietnamese soldiers. Fifteen years later, he's still passionate about the subject.

To enable his students to get a firsthand feeling for what veterans went through, he has them complete an oral history interview with a Vietnam veteran.

“What we find many times,” Milam said, “is that, Grandpa who hasn't said anything to his daughter or son for 40 years, will now talk to the student because it's a class assignment.”

Milam said he thinks veterans can be more willing to open up for an assignment because it's a way they can help their children or grandchildren with their education, especially if the veteran feels like he should've talked about it before.

“It's a way we're using to try to educate the families who are caring for these veterans,” he said. “We do that in a lot of different ways, but one of the best ways we do it is to have our own students go into homes and talk to Grandma and Grandpa about their experiences.”

Over the next seven years, the 50th anniversary of the war will be commemorated. Milam anticipates a new demand on the resources offered at Texas Tech, such as the Sam Johnson Vietnam Archive, the Institute for Peace and Conflict and his own graduate students.

Milam said he has found that many veterans are willing to talk about their experiences at some point. He believes it has taken Vietnam veterans longer to come to that point than any other war in American history, and it's important that someone is there to listen.