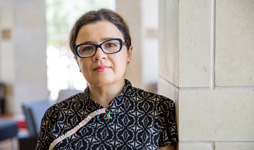 Cristina Bradatan has examined how climate change affects various parts of the world in terms of children's health and economic prosperity.

The effects of climate change most discussed by experts or most often portrayed by news media involve massive chunks of arctic ice breaking off of glaciers or large swaths of once-fertile ground transforming into a wind-blown wasteland.

Cristina Bradatan, an associate professor in the Department of Sociology, Anthropology and Social Work in the Texas Tech University College of Arts & Sciences and a member of the Climate Science Center, has studied West Texas and different parts of the world, examining how people adapt to climate variability caused by climate change and how their socioeconomic status and the amenities they use affect their health in relation to that increasing climate variability.

"It is important for us, as a university, to also serve the community," Bradatan said. "I've lived here for 10 years, but it's only in the last five years that I've started to understand what the issues are here and that we can do something, as academics, for these issues."

In addition to studying the climate issues of West Texas, Bradatan also looked at these issues affecting people in Honduras and her native Romania. On the surface, these three areas may seem completely different, yet they are connected.

Honduras was chosen due to the issue of emigration, which has been a political hot topic for the last few years. Much of the migration that has been the focus of U.S. officials recently has come from the Northern Triangle (Honduras, Guatemala and El Salvador) crossing Mexico and into the southern U.S.

Romania, specifically southern Romania, was chosen due to its agriculture industry that has changed dramatically since the country's revolution in 1989, going from Communism to a free-market economy. It is also seeing its own outflux of people leaving the country due to economic issues.

"Romania has seen a high rate of growth in the last 10 years, so it is better than Honduras," Bradatan said. "West Texas is high in terms of gross domestic product (GDP), Honduras is at the bottom and Romania is somewhere in the middle. But in terms of outmigration, Romania is like Honduras. The people are leaving."

The impetus behind choosing Honduras to study, in terms of adaptation to climate variability and the health issues that arise from it, is the issue of migration.

According to Bradatan, the majority of migrants who came to the U.S. during the immigration crisis of just a few years ago came from the areas bordering Honduras, El Salvador and Guatemala. While some of those migrants settled in Mexico, the majority of them made the trek across the country and into the U.S.

A big motivation for the migratory influx was an increase in violence in the area, and people seeking to escape it. But the biggest factor in the migration was deteriorating economic conditions. It was in studying the economic factors that Bradatan discovered there are environmental issues, as well.

Bradatan said a high rate of deforestation in Honduras led to flooding, which destroyed the soil and made it unfit for farming in a country where about 40 percent of Honduran residents work in agriculture. With the help of data obtained from demographic and health surveys and knowledge of where households are located, Bradatan was able to connect data on climate issues for the past 30 years to events like flooding, anomalies in rain amounts and temperatures, and how this affects children's health and people's livelihoods.

"If you have a good piece of land, you can stay and work that land. But if the land is no longer good, what can you do?" Bradatan said. "You could wait one year, two years, three years, but these are people who don't have a lot of money, so how long can they really wait until they just decide to move?"

Those who try to stay and stick it out deal with conditions that are worsening every year due to climate change, or more particularly, climate variability, where the number and frequency of days with temperature and precipitation extremes are growing rapidly. That causes massive floods or extreme droughts that destroy the ability of Hondurans to effectively farm the land, and the government is powerless to help.

"On one hand, you have climate change increasing climate variability," Bradatan said. "On the other hand, you have governments that are weak and don't have money. They're not able to provide – or are unwilling to provide – the support for those people to keep their livelihoods."

So, they move. In particular, young adults move seeking a better life, whether that's in the larger cities in Honduras or in a different country altogether.

Those who stay, however, live in extremely unhealthy conditions. Houses are made with dirt floors, which can cause respiratory conditions in children. Wood is the most-used cooking fuel, and, with most of the cooking done inside, that affects children's health. Clean water isn't always available, further affecting health.

"What we saw is that, in most of these regions with high climate variability, they are also the regions where households have the poorest amenities," Bradatan said. "Without action, it's only going to get worse."

What can help are co-benefits, a change in amenities that can, in turn, improve the health of residents. Putting different flooring in houses instead of dirt, giving access to different kinds of cooking fuel other than wood, providing access to clean water and providing health facilities are just a few examples of what can be done.

The key will be getting the government of Honduras to take action.

"I would help to solve this issue in advance and also help them adapt to climate change and allow these people to stay in place," Bradatan said. "It's a win-win situation."

Half a world away, Romania is also dealing with issues stemming from climate variability on one of its main economic drivers – agriculture.

Southern Romania is dependent on agriculture for its economy. In particular, irrigation has been most affected by climate variability.

Because of the reduction in agricultural production, Romania, like Honduras, is seeing an outflux of its youngest generation, even though many are in line to inherit their family's land.

Those who stay, though, will be better off by banding together with others to solve their problems. Bradatan cites a study that examined the irrigation system in Valencia, Spain, that has been around for centuries, benefits all those who are a part of it and better prepares them to handle climate variability.

"You would think this is a rational thing to where it would happen a lot, but it doesn't," Bradatan said. "You need to have some kind of history behind it to be able to make this commitment and work together, put in your own work and a lot of money, to do these types of things."

This idea of cooperation to solve water issues brought Bradatan back around to the issues facing farmers in West Texas with a depleting Ogallala Aquifer. Luckily, in the U.S., the infrastructure is in place to better deal with these issues, but there are still steps that can be taken to ensure enough water both for residents and the thriving cotton industry that is a major part of the U.S. economy.

"It is important for us to address the problems of our community as we also will be affected by these issues," Bradatan said.