The honor recognizes the efforts of men and women across business, government, philanthropy and the arts who are helping change the world and inspiring others.

Katharine Hayhoe, one of the world's leading climate science experts who is the director of the Texas Tech University Climate Science Center and a professor in the Department of Political Science, has been named one of the top 50 World's Greatest Leaders by Fortune Magazine.

The list honors men and women across the globe who are helping to change the world and inspire others to do the same, be it in business, government, philanthropy or the arts. The list includes other notables such as Pope Francis, Amazon founder and CEO Jeff Bezos, German chancellor Angela Merkel, NBA superstar LeBron James, Tesla and SpaceX CEO Elon Musk and U.S. Supreme Court Chief Justice John Roberts.

"I am honored to be named one of Fortune's World's Greatest Leaders," Hayhoe said, "and to be included with so many amazing people – some well-known, others highlighted for the first time in this list – who are having such a tremendous impact on our world."

An evangelical Christian, Hayhoe attempts to present the realities of climate change through connecting the issue to values we already hold dear instead of being confrontational when it comes to scientific facts.

Fortune praised Hayhoe for her effort to "become a friendly, if unexpected, force in spreading the science. Whether speaking to her digital audience or with fellow parishioners, Hayhoe's approach is patient and compassionate and modeled after conversations she had with her husband, a linguistics professor and pastor who once, himself, had doubts about climate change."

Hayhoe attempts to reach a global audience as well through the KTTZ PBS program "Global Weirding," an online series that focuses on exploring the arguments, science, religion, culture and psychology where politics and climate change intersect. The series produced 10 episodes in season one, and the second season will begin in September.

The recognition is one of many Hayhoe has received for her efforts to bring the message of climate change to a skeptical audience.

In September 2016, she was named to the annual Politico 50 list, which recognizes those in society who help shape policy and thinking in America. Writers, inventors, lawmakers and activists comprise the list of the 50 most influential people in the national political debate. She also was honored by the Sierra Club with the 2016 Distinguished Service Award, given to those in public service who exhibit strong and consistent commitment to conservation over a long period of time.

"My work may defy some stereotypes about the politics of science and religion," Hayhoe said. "By defying stereotypes, my hope is that this creates the opportunity for all of us to consider what we truly value and to align our attitudes and decisions with the values that define us." 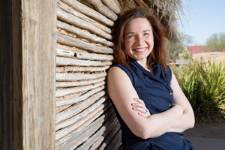 For all media and scheduling inquiries, please contact:
Laura James.