What Freedom Means to Me

The Texas Tech students who are interning on Capitol Hill contributed their thoughts after visiting the monuments to freedom in Washington, D.C.

Every semester, more than a dozen Texas Tech University students go to Washington, D.C., to intern on Capitol Hill. Those interns who go in the summer get the unique opportunity to be in the nation's capital on the Fourth of July. For Independence Day, a number of students toured some of D.C.'s monuments to freedom and reflected on what freedom meant to them.

Family, friends and fireworks are the first thoughts when celebrating the Fourth of July. At Arlington National Cemetery on Memorial Day, it was apparent that freedom is not free. I was there to see the gravesite of my uncle, who was killed in Afghanistan. There were widows with their children camping out by their loved one's grave; they will never forget. This place is a sobering reminder of how many blessings we as a country take for granted. If not for these sacrifices, we would not have the liberties we hold so dear. Ronald Reagan once said, “Freedom is never more than one generation away from extinction.” Let us never forget the ultimate price countless heroes have paid protecting our freedom.

“We hold these truths to be self-evident: that all men are created equal; that they are endowed by their Creator with certain unalienable rights; that among these are life, liberty, and the pursuit of happiness.” – Thomas Jefferson in the Declaration of Independence, also engraved on the Jefferson Memorial in D.C.

It's amazing to me how such a simple phrase was so radical for its time and how one man could change the world by the power of his words. What we take for granted had to be fought for tooth and nail, both diplomatically and militarily, but these realities are often forgotten. Even 240 years later these words ring true and continue to be our creed, and while we ourselves had to learn the true meaning of this phrase, these words have come to represent what we hold most dear: freedom.

Coming to D.C. has really put into perspective the meanings of the national monuments as well as established a great sense of American pride at the beauty of our capital. But I found the real history and beauty – the history of the long and hard-fought battle for freedom and the beauty of the souls who sacrificed so much to defend it – on Memorial Day at the Arlington National Cemetery. Walking through the grounds and reading the names of those who fought for our freedom – my freedom – was such a humbling experience. Seeing the countless number of names etched in stone and family members surrounding them hit me at the center of my being; I was brought to tears. I didn't know their names or their stories, but I knew their mission. Standing there, taking it all in, I felt it. I felt the freedom that was fought for, won and protected by those men and women. I was filled with such a deep sense of awe at the selflessness of the people who so bravely serve our nation, both past and present. It's something that made me so much more appreciative of the liberties I so often take for granted.

The Supreme Court is the highest court in our country and establishes the laws that allow us as American citizens to enjoy the freedoms we have. Freedom means having the ability to be heard in such a large country so as a human, our basic needs and rights are met through a court of law. Without the Supreme Court we would not have due process, a fair trial or historic advances in our world such as the right to live in a desegregated country, which came from Brown v. Board of Education. Having such a prominent court system in America allows for citizens to reach their goals and attain their idea of the American dream, and that is the ultimate freedom.

The intangible right of freedom is a gift often taken for granted, and it's hard not to be filled with emotion when looking at the Capitol building in Washington, D.C. Being able to walk by this building every morning is a blessing, and it serves as a sobering reminder of how precious freedom truly is. As the host of both the House and the Senate chambers, the Capitol has been facilitating the beginning stages of the legislative process since its construction in 1793. The preservation of freedom is vital and should be a priority of every American citizen.

Freedom is defined as the power or right to act, speak or think as one wants without hindrance or restraint. Throughout my time in D.C., the most I have felt this sense of freedom was while visiting Arlington National Cemetery. Standing on the ground where those who have died for our country – died for our freedom –  are buried is the most humbling experience I have had. It is so easy to get caught up in the whirlwind of life and take our freedom for granted, but visiting the cemetery brought me back to a place of utter thanksgiving and reminded me this freedom does not come without a price. These men and women have given their lives so we can live and pursue our dreams, like I am doing in Washington, D.C. I am thankful for the freedom we have in the United States, but we need not forget how this freedom came about.

You see it right away flying into the capital, and right away know what it is. The Washington Monument is the most recognizable monument in D.C. and one of the most significant. George Washington, the father of our country, is the most represented man in the capital and rightfully so. From leading untrained soldiers during the Revolutionary War to resigning his commission as commander-in-chief of the continental army and becoming our first president, George Washington's leadership is a model for all of our future leaders. For me, the monument represents the freedoms that so many before me have fought for and a unifying figure in our country. 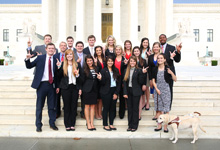