What You Need to Know About Carol of Lights

Celebrate spirit and tradition at Texas Tech in person, on television, by radio or streamed online. 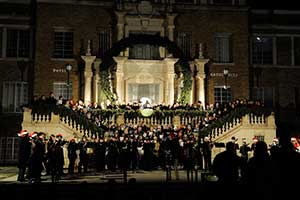 More than 20,000 people gather every year at Memorial Circle and the Science Quad to ring in the holiday season with carols, hot chocolate, carillon bells and the lighting of red, orange and white lights along the center of campus.

As 18 buildings on campus light up the night sky, along with a tree and wreath, the holiday season officially begins in Raiderland.

While many see the overall production of the Carol of Lights celebration, there are many behind-the-scenes facts that people may not know.

Did you know more than 20,000 lights are connected on one strand across 18 buildings, the tree and wreath?

This year, 20,841 lights are hung up around the center of campus, courtesy of Texas Tech's Operations Division. The setup process begins two months in advance to make sure all of the lights are connected and work correctly. 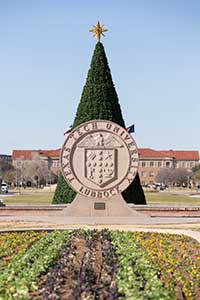 But how are they all connected? Through a series of electrical contactors interconnected through the university's tunnel system and also above ground at certain places.

Texas Tech also has been making the transition from glass incandescent lights to LED lights to conserve energy. Currently 80 percent of the lights are LED and will be 100 percent LED in 2015. The new bulbs are more durable and are 87 percent more efficient. This transition roughly saves the university $800 a year in utility costs.

Did you know Texas Tech has a new 38-foot-tall tree that is sturdier than the previous one?

This year, Texas Tech features a brand new tree after retiring the last one that was donated by alumnus Jim Sowell in 2002.

The tree is 38 feet tall (or three stories high) plus another 5 feet for the star that sits on top of the tree. The tree has approximately 85-100 pieces and is pre-decorated with 2,900 LED lights. In the past, the tree has had multicolored lights but the tree will now shine brightly with cool white lights.

Did you know the carillon has 37 bells and the largest one weighs approximately a ton?

The carillon concert fills the air each year with traditional carols, but no performer is ever seen.

The Charles and Ruth Baird Memorial Carillon is located in the west tower of the Administration Building, where music professor Thomas Hughes plays the set of tuned bells each year.

The carillon includes 37 bells arranged in a circle that are long ringing and have harmonics that emphasize certain tones. The largest and lowest-pitched bell, called the bourdon, weighs approximately a ton, and the smallest one weighs eight pounds. 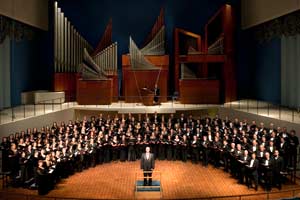 Music continues with the Carol Concert at Hemmle Hall following the lighting ceremony.

Foundries in England and France cast the majority of the bells, and the estimated value of the collection is $250,000.

Did you know the Silent Raiders, a student organization for sign language, signs for Carol of Lights each year?

Officers for the Silent Raiders student organization perform traditional carols each year for those in the audience who have hearing impairments. The organization prepares months in advance to not only sign the carols but also make the signing appealing to the eye.

Did you know the greenery for the wreath is fresh-cut pine limbs?

The wreath that adorns the front of the Geosciences Building is 20 feet in diameter and has fresh-cut pine limbs placed by members of the Women's Service Organization. The limbs are cut at Texas Tech and also adorn the balcony.

Other Carol of Lights facts: 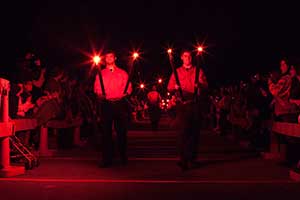 Parking is available in the north commuter parking lot near Jones AT&T Stadium.

Campus streets in the vicinity of Memorial Circle will close at 5:30 p.m. and will remain closed until the completion of the event.

Handicapped Access: Increased handicapped parking will be available in the R1 parking lot north of 15th Street directly behind the chemistry building.

Hearing Impaired: The Silent Raiders will provide signers for those with hearing impairments.

Any individual needing special accommodations related to a disability can email RHA at rha@ttu.edu.

For more information about the celebration, please visit the Carol of Lights website.

Carol Concert a Musical Finale for Carol of Lights

Video: Behind the Scenes at Carol of Lights