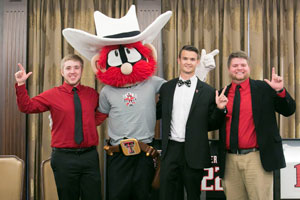 Three seniors from Texas Tech University revealed their identities and transferred their roles to two new students at the Passing of Guns ceremony Friday (April 17) after serving as Raider Red, one of the university's official mascots.

In the past year, Roye, Lancaster and Fisher made 150 appearances, including athletic, Texas Tech and civic events.

Roye, who served as Raider Red from 2013-2015, said being a Texas Tech mascot is something he can't put into words.

“Having the opportunity to step into the boots of Raider Red and look through his eyes for the last two years is an indescribable feeling,” he said. “To make so many people laugh and represent Texas Tech is one of the greatest feelings in the world.”

He said the first time he ran out to the middle of the football field at Jones AT&T Stadium while holding Raider Red's guns was one of his favorite memories.

“Hearing the stadium yell, ‘Go, Fight, Win!' and pulling those triggers was truly one of the most thrilling moments of my life,” he said. “My heart was racing, and I was more nervous than I had ever been before in my life.”

Aside from Texas Tech football games, Roye also attended the Big 12 Football Media Days where he interacted with the other mascots in the Big 12 Conference. 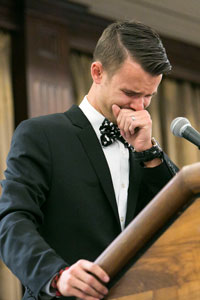 Lancaster thanks his mother for her support.

Lancaster, who served as Raider Red from 2013-2015, said Raider Red gave him the confidence to help him achieve anything after graduation.

“Being Raider Red helped me to know I can do anything I want to do in life,” he said. “Raider Red's attitude toward anything is that he does what he wants and he will do it. His characteristics each of us Reds personify are contagious.”

Lancaster attended the Holiday Bowl in 2013 when Texas Tech upset then-No. 14 Arizona State. He recalled it as one of his favorite memories from his two years as Raider Red.

“I got to go to California for the first time in my life, and I saw firsthand how impressive the Texas Tech fan base is with how well they traveled and supported a young team under a first-time head coach,” Lancaster said.

Fisher, who served as Raider Red during the 2014-2015 academic year, said being Raider Red is not just a privilege, it's a gift.

“I've had a lot of realizations about Raider Red during my time behind the mustache,” he said. “My biggest realization is that being Raider Red isn't just a privilege for the people who put on the suit, it's a gift. It is a gift that allows you to make a difference and better Texas Tech.

“Being Raider Red allowed me to share my passion for Texas Tech and leave lasting memories in every person's mind about what Texas Tech is. The reason I joined Saddle Tramps was to contribute to the betterment of the university, and I will always cherish my time as Raider Red.”

Fisher said his favorite memory as Raider Red was attending a Texas Tech volleyball game when they were playing against a team from Beijing. 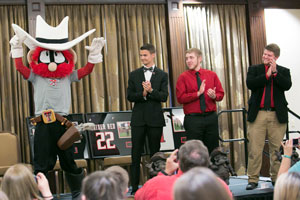 Passing of the guns is complete.

“After the game, I approached the Beijing volleyball team, and they asked for a picture,” he said. “After they took the picture, I turned around and gave one of the players a big kiss, and all the girls on the team laughed. It was special because these girls had no clue about Texas Tech or what we were all about. I got the opportunity to leave a lasting memory of what Texas Tech is for these girls, and that was one of my favorite things about being Raider Red.”

Raider Red was created as an additional mascot to the Masked Rider before the 1971 football season when the Southwest Conference passed a rule restricting universities from bringing live animal mascots to out-of-town games. Members from Texas Tech's Saddle Tramps and High Riders spirit organizations serve as Raider Red.

The two new Raider Reds will serve the Texas Tech community during the 2015-2016 year and will be revealed at the end of their term.