The coach currently is representing the U.S. at the World Team Championship. 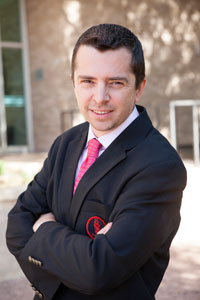 He currently is representing the United States as a member of the five-player team selected based on world ratings in Armenia at the World Team Championship, where the top 10 chess teams in the world compete.

“We're extremely proud of Coach Alex's qualifying for the World Cup, and we're also very proud of his commitment to represent the USA in the World Team competition,” said Al Lawrence, Texas Tech chess program director. “A player of his world-class caliber has other, more lucrative options. But he's been a stalwart on USA teams. He's a wonderful example to our students and a great representative of Texas Tech.”

Onischuk finished fourth at the U.S. Chess Championship in the elite 12-player invitational event, where he defeated the incumbent champion and former world championship challenger Gata Kamsky. This allowed him to qualify for the World Cup elimination matches in September. Onischuk has been a top player in the chess world for the past 17 years.

“I just want to thank people that supported me during the tournament, including my students and the Texas Tech Chess program staff,” said Onischuk. “I received many well-wishes from Lubbock during the championship.”

Onischuk and the Texas Tech chess team recently placed third in the Final Four of Chess at the national collegiate championship in New York City. This was the Knight Riders' second year qualifying for the tournament.