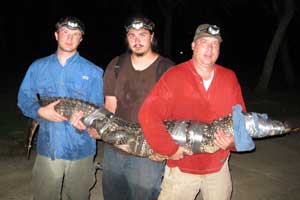 A Texas Tech University biologist led a team of more than 50 scientists who mapped the genomes of three crocodilians.

By mapping these genomes, scientists may better understand the evolution of birds, which are the toothy predators' closest living relatives, said David Ray, an associate professor of biology. The team completed genomes of a crocodile, an alligator and a true gharial to complete the genomic family portrait.

Their research, largely funded by the National Science Foundation, will appear Friday (Dec. 12) in the peer-reviewed journal, Science.

“One of the major finds in our case was that crocodilian genomes change very slowly when compared to birds,” Ray said. “We compared both birds and crocodilians to turtles, which are the closest living relatives of the group that includes both birds and crocodilians. We found that they evolved slowly also. The best explanation for this is that the common ancestor of all three was a ‘slow evolver,' which in turn suggests that rapid evolution is something that evolved independently in birds.”

Research began in 2009 as an attempt to map only 1 percent of crocodilian DNA. However, shortly after starting, the price for mapping a million bases dropped from $1,000 eventually down to $1.

“We had proposed to sequence about 2.4 million bases from the three crocodilians in the original proposal,” Ray said. “By the time we got the funds, it became clear that we could easily accomplish a thousand times that much and could afford to sequence an entire genome of 3 billion bases.” 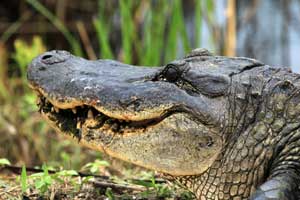 Ray said that when biologists look at a group of organisms, they look for what makes that group unique as well as what all members of one group of organisms share that other groups do not. The best way to do that is to examine their closest relatives.

“Technically, birds' closest relatives are the dinosaurs,” he said. “So we can only look at their fossils and this can provide only limited information on their biology when compared to examining organisms that are alive today. We get insight into differences in behavior, structures that don't fossilize, and in our case, the makeup of the genome.”

Ray said he and other scientists were surprised to see how genetically uniform the alligators that the group sequenced were. Initially, the group suspected severe hunting during most of the 20th century may be to blame.

“Because alligators underwent a severe population decline, we first thought that might be what happened,” he said. “However, we see the same pattern in all three species and the likelihood that all three were subject to the same genetic bottlenecks is small. We suggested instead that change just occurs slowly in crocodilians. In other words, it wasn't that the genetic differences were reduced because of overhunting. Rather, the amount of variation in crocodilians is low because change simply occurs slowly in these genomes.” 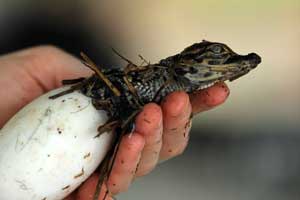 Ed Green, an assistant professor of biomolecular engineering at University of California, Santa Cruz, has worked on several mammalian genomes, including that of Neanderthals. He said he didn't expect such slow genetic changes seen in these reptiles.

“Crocodilian genomes are really interesting because they appear to have changed so little over time,” Green said. “From the perspective of someone who knows a lot about mammalian genomes, reptiles are strange in how static they are. Crocs and gators are especially static.

“Like most genome projects, the assembly and annotation is only the beginning. There is some fascinating biology in Crocodylia like temperature-dependent sex determination. Male and female crocodilians are genetically identical, and we'd love to know how that works. We're also now in the position to start looking hard at the genomes of the common ancestor of crocs and birds. Not much is known about the biology of this creature, called an archosaur. But we may hope to learn a lot about it by reconstructing its genome from the living genomes of its living descendants, the crocs and birds.”

Wisdom for the Windfall: Financial Advice for Graduates

Ask the Experts: How to Create a Standout Resume