Ten Reasons to be Thankful You're a Red Raider

From the Masked Rider to helping military veterans, Texas Tech holds a special place in our hearts. 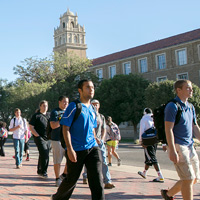 Like the hit song by Pat Green (a Texas Tech alumnus, BTW) waves of students are headed to Texas Tech. For the sixth straight year the university set a fall enrollment record with 35,134 students. That's 2,023 more than Fall 2013, which represents the third-largest enrollment increase in a single year since the university opened in 1925. 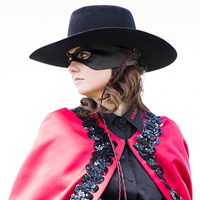 At the 1954 Gator Bowl, Texas Tech student Joe Kirk Fulton, adorned in a cape and mask, led the football team onto the field atop a black horse. The highly revered tradition of the Masked Rider was born that day, and 60 years later it continues to ride on. This year's Masked Rider, which was named one of the top ten coolest college mascots by the The Associated Press, is Mackenzie White, a senior from Marble Falls. 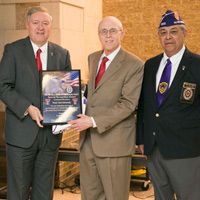 We bleed scarlet and black, but our hearts are purple

Texas Tech is home to the Military and Veterans Program, which provides assistance for military personnel, veterans and dependents of veterans who attend the university. The program has received numerous national recognitions and recently was designated as the first Purple Heart University in Texas. 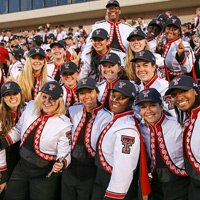 We all know the answer to the question: “Who's the best band in the land?”

The Goin' Band from Raiderland. 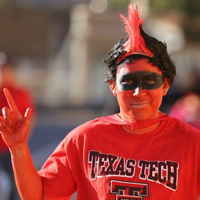 Who wore it best? Us, of course

Our school colors of scarlet and black go with almost everything and are stylish on game days and regular days. A lot of schools can't say that about their colors. 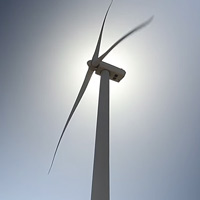 Dust in the Wind

Sure, there are few days when your walk across campus includes a brown sky and a mouthful of grit, but is there a better place to study wind power? You bet your bad hair day there isn't. Texas Tech is home to the National Wind Institute, the nation's leading university wind-focused research and education enterprise. 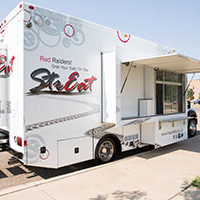 And we're not talking about the golden arches. We're talking about our new state-of-the-art StrEat Food Truck, the first university-owned food truck in the Big 12 Conference. This truck was specifically created to serve students who need a quick bite or are too far away from other dining options. The menu also is one of a kind, serving such mouth-watering fare as Monte Cristos, Korean beef tacos, funnel cake fries and vegetarian options. Nom nom nom. 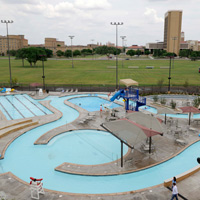 Everyone knows Red Raiders are cool, but did you know we also have the perfect place to stay cool? Our Student Leisure Pool, one of the first of its kind in the Big 12 Conference, is a two-acre oasis that includes a lazy river and a 15-foot slide among other amenities. Study break, anyone? 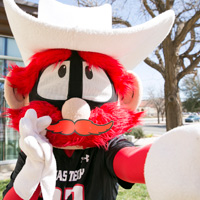 I mustache you a question

Which mascot was named the Capital One 2012 National Mascot of the Year? Raider Red, that's who. Our beloved mustachioed, Wild West personality was created in 1971 out of paper-mâché by student Jim Gaspard, and has since become a fan favorite. 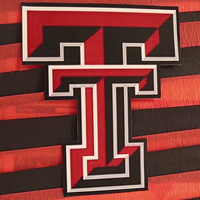 What's better than one T? A Double T, of course. Texas Tech's loveable logo was officially adopted in 1963 and transformed into its current 3-D version in 2000. The mark is not only prevalent across campus, buy can be seen around the globe thanks to our proud alumni.