Every year, four teams on the Texas Tech University campus routinely vie for national championships – often as one of the favorites – but rarely compete at home.

No big crowds. No bands playing at halftime. No television exposure or big-money contracts. Yet these Texas Tech teams are some of the best and well-respected in the nation.

Team members won't turn pro after their collegiate days are over, at least not in the way most think. They'll put to use what they learn through classes and competitions in their professional lives, but there are no endorsement deals or big contracts to sign.

The Fall Intercollegiate Meat Judging National Championships are Nov. 16 in Dakota City, Nebraska, while the national championships for livestock judging will be held Nov. 17 at the North American International Livestock Expo in Louisville, Kentucky.

Once again, Tech is considered the team to beat in both competitions.

“I'd say our judging program is evolving into one that everybody has to put on the list when they say, ‘If we're going to win this contest, who do we have to beat?'” said Mark Miller, a professor of animal and food sciences in the College of Agricultural Sciences and Natural Resources and the coach of Texas Tech's meat judging and meat science quiz bowl teams. 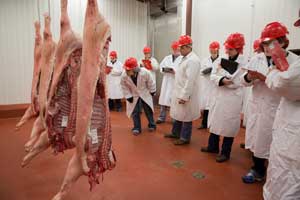 Since 1989, the meat judging team has captured 11 national championships, including a six-year stretch when it won five national titles from 2008 through 2013. Miller said the one team that finished second in 2010 might have been his best team ever.

Loni Woolley, a graduate research assistant at Texas Tech who will earn her master's degree in animal science in December, was a member of that 2010 team, helped coach the 2013 national championship team and currently serves as assistant coach. She said the 2010 team had a passion for meat judging, which allowed the squad to win all six competitions it entered leading up to the national championship. 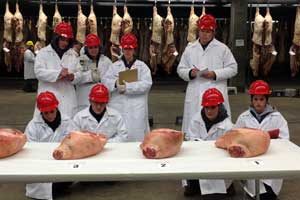 “The three things we really focus on is pursuit of excellence, that's No. 1,” Miller said. “The second thing is we try to make sure our students and all our people, as far as staff and faculty members, do it with honor. Striving for honor is really important to us. The last thing is serving unselfishly.”

The livestock team's success almost was instantaneous. Ryan Rathmann took over as coach in 2007 and led them to the national championship that year, though it was a struggle.

Rathmann said the livestock judging team competed at 11 events in 2007 and lost every one of them until they reached the national championship.

“That was a challenge that year working with students who didn't have a taste of what it felt like to win,” Rathmann said. “They didn't know how much fire they needed to work with to see their goal come to fruition.” 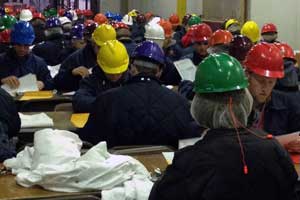 Texas Tech's athletic coaches who played here aren't the only ones on campus personally invested in their programs.

Rathmann earned his doctoral degree from Texas Tech in 2008 after earning his bachelor's and master's degrees from Texas A&M. As a teaching assistant at A&M, Rathmann coached the school's livestock team to three straight national championships (2002-2004).

Success at Texas Tech was instantaneous. The livestock judging program, which last won a national championship in 1985, won three straight national titles from 2007 to 2009, and the 2008 team holds the record for all-time highest team score. Rathmann said winning the title that first year was the most important step taken in making Texas Tech's livestock judging program as successful as it is today.

The key, Rathmann said, to building a good team every year is recruiting students who are intelligent, rational thinkers and are able to articulate detailed points. Not only are students who possess these traits successful in judging but also in the classroom.

“We're continually recruiting great students and staying committed to the amount of work it takes to realize success,” Rathmann said. “Competition fuels work ethic and people work harder because they want to be the best.” 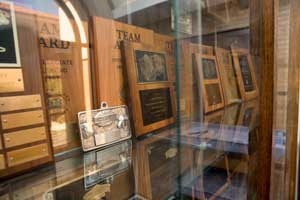 Since 1989, the meat judging team has captured 11 national championships, including a six-year stretch when it won five national titles from 2008 through 2013.

Like Rathmann, Miller is personally invested in his program as well, mainly because he was a part of it as a student when the program was considered one of the worst in the nation.

Miller said the program was “last at the national championships more than any other university.” While a member of the program, he helped establish the Meat Science Association to help generate support, especially financial. The association allowed the team to recruit students and pay for travel. To competitions.

That has led today to Texas Tech having the largest judging endowments in the country covering all costs of competition. Miller said alumni have generated more than $1 million for the endowment, and students have contributed to it through catering meals, grading carcasses and other service projects. Sales from Raider Red Meats inside the Animal and Food Sciences building also go to support the judging teams, students and department.

It finally began paying off with a national championship in meat judging in 1989, and the next year, Miller returned to Texas Tech as a professor of meat science and coach of the judging team.

Since Miller's arrival, Texas Tech has won 10 national championships in meat judging and another seven in the meat science quiz bowl. Miller said much of the team's success is due to the support from alumni and friends such as the San Antonio Livestock Show and Rodeo, Gordon Davis and CEV Multimedia and The Helen Jones Foundation.

He also credited the support from family and staff members, such as Rathmann's wife, Kayla, and Moriah Beyers, a coordinator in Animal and Food Sciences, with aiding in the team's successes. 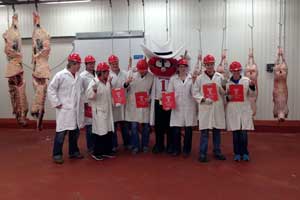 “We always try to give a philosophy to our students on the meat judging team that it's really more important for us to think about something bigger than ourselves, that we're really representing Texas Tech,” Miller said. “We've been very fortunate to have the very best students start coming to Texas Tech, and that's the reason our success is where it is.”

Unlike livestock judging, Miller said no experience is necessary to join the meat judging team. In fact, sometimes, it's better to have someone with no experience so they have no preconceived notions on how to judge and can be taught from the ground up.

The only requirement to be on the meat judging team is enrollment in a livestock and meat evaluation class in the Department of Animal and Food Sciences. That allows team members to be more than just part of a team or the department, but also part of the Texas Tech community, Miller said.

“It all became how we developed as people, what we are able to do as a person,” Miller said. “How we impact other people's lives, the bigness of it, being something bigger than yourself. When we finally went to that and got everyone on the same page, we started seeing amazing success in all of our programs.

“I will tell you the success we've had is totally due to the students and them being unselfish and not focusing on winning but what we can do to be the best every day, and that makes a big difference.”

Woolley agreed, saying tradition plays a big part in the yearly success as well as wanting to live up to the reputation built over time as one of the top judging schools in the country.

“We're probably the No. 1 school for judging, and especially livestock and meat judging,” Woolley said. “Owning that for so many years and seeing the teams before you makes you want to be successful as well. Every year we keep getting better and better and everyone is very unselfish with their time. It's a great environment to be around and it's fun as well.”