Kylie Boyd is a hard-working student, athlete and volunteer with a love for the Lubbock community. 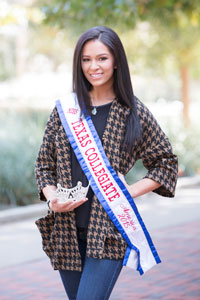 Kylie Boyd's classmates at Texas Tech University probably would never guess they're sitting next to the reigning Miss Texas Collegiate. The sophomore early childhood education major seems like any other student: she likes going to class in sweatpants and binge-watching shows on Netflix.

The hard work Boyd puts in to earn and live up to her title, however, is anything but ordinary.

Boyd began competing in pageants at the age of 5 when her mother enrolled her in a competition to see if she'd like it.

“It was just a little local one, but I loved it,” Boyd said. “I've done them ever since.”

Boyd has since competed in countless pageants and has won a title every year since she was 13. Her titles have included Miss Teen Lubbock, Miss Teen Texas and her current title of Miss Texas Collegiate.

“When I hit 16, I decided I wanted to pursue pageants competitively,” she said. “I worked really hard and I ended up winning Miss Teen Texas, and from there I went to Miss Teen USA. That was super fun, I ended up making the Top 15.”

Boyd said some of the hard work preparing for a pageant includes fitness, walk training, preparation for backstage and onstage interviews, and a lot of community service.

Boyd, who just recorded her first single, plans to sell copies of the song and donate the proceeds to a suicide rehabilitation center in Lubbock.

“I love to sing and I write a lot of songs,” Boyd said. “I was trying to combine some of the things I do in order to fundraise. I hate just asking for money, so I'm really excited about this.”

Boyd spends much of her time volunteering and participating in community service because of her love for the Lubbock community. She has worked with Heroes for Horses, Meals on Wheels and the Lubbock Boys and Girls Club, and is a national spokeswoman for the anti-bullying campaign, B.R.A.V.E.

“I travel around and talk to a lot of high schools and junior high schools for B.R.A.V.E.,” Boyd said. “Sometimes I even get to talk to elementary students, which is super fun.”

Boyd said though her favorite thing about competing in pageants is the volunteer service, she also loves meeting the people that pageants bring together. 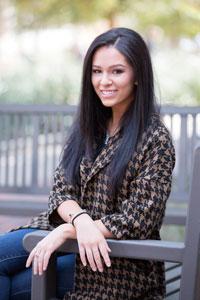 “All of these girls are great people,” Boyd said. “They're all 4.0 students that are going to be doctors and lawyers and awesome professionals. It's really cool because not only do you get to experience the pageant, but you get to meet a lot of amazing people that are really inspiring.”

Boyd said she loves children and hopes to one day open her own daycare.

“I'm emphasizing in special education, so I really want to open a daycare with opportunities for special-ed students,” Boyd said. “A lot of daycares don't offer that, so I think that would be a really good thing to have available.”

Boyd grew up in Friona, Texas, on her family's farm, where her love for riding horses eventually translated into a love for rodeo.

“I rodeoed for Tech my first semester, but it took up a lot of time and it didn't really fit with my schedule with pageants,” Boyd said. “So now I rodeo professionally, which fits with my schedule better because I can pick which events I go to.”

Boyd was the American Junior Rodeo Association world champion last year in barrel racing and was selected this year as a top 10 finalist to be a National Finals Rodeo flag girl.

“To be a flag girl is a really big deal,” she said. “The finals are in Las Vegas and thousands of people go. To be selected as a top ten finalist out of hundreds of people is awesome because I get to be in the arena with all the people I look up to.”

She said another interesting fact is that she was the first minor in Texas to contract West Nile virus.

“I guess I just got bit by a mosquito in my barn,” she said. “I was 15. It was awful. I had seizures for a while and there's still a lot of lasting effects that will never go away.”

After passing on her Miss Texas Collegiate title, Boyd said she wants to pursue the Miss Texas title.

“I might have to compete in that a few times but I'm going to try my best in those few years,” Boyd said. “A lot of people think that once you win the pageant that's it, but really that's just the beginning. It's everything you do after that, and that's definitely my favorite part. I love getting to help my community, because we live in an amazing city and I get to meet all of these great, inspiring people within it.”

Getting to Know
Kylie Boyd

I chose Texas Tech because my family has a long history with the university. My grandparents, father and both brothers all attended Texas Tech. My family also lives in Lubbock and they were not quite ready for me to leave the nest yet! I don't think my mom would have given me the option to leave even if I wanted to since I am the baby of the family.

When I was asked to join the Golden Key International Honor Society. A lot of my professors have really challenged me academically, so maintaining my grades has been very rewarding.

My favorite professor is Chelsey Ahrens. I had her my very first semester at Texas Tech and I learned many great life skills in her class. She is extremely nice, and I always looked forward to her lessons.

The Student Union Building. I am a huge fan of any kind of food, so I always find time to make a pit stop between classes.

Singing the Matador Song at games. I have been coming to Tech games since I was a little girl and it still gives me chills to see the crowd come together with so much pride.

I love being a Red Raider because our school pride is unmatched. It is apparent just walking through campus students and professors love their school for all the right reasons.