Veteran Zac Lindsey endured a lot for his country, but now he's making the most of his opportunities. 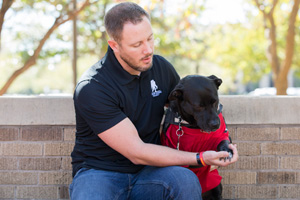 Zachary Lindsey was headed down a dark road in his early 20s. He was always looking for trouble and never worried about the consequences.

Little did he know, one decision would change his life for the better.

"I thought I would end up in a bar ditch or jail,” Lindsey said. “But, one day, I literally walked out of my math class here at Texas Tech and went straight to the marine recruiting office. Less than a month later, I was gone to boot camp."

Eight years later, Lindsey is again a student at Texas Tech University, only this time as a retired sergeant of the United States Marine Corps. The 30-year-old Tahoka native endured many physical, mental and emotional trials during his service, but said he would not be the man he is today without the Marines.

“I have short-term memory loss, damaged hearing, no feeling in my right leg and a right arm that barely works,” he said. “But I learned self-discipline and leadership. I lived for deployment and I had some of the most fun you would never want to have again.”

'Worst Pain I've Ever Had'

Most people wouldn't consider camping out in 140-degree heat while carrying 80 pounds of armor and 20 pounds of ammunition fun, but Lindsey said it was the kind of misery that turned into the best times of his life.

“You haven't eaten real food in two weeks. You don't even know what a toilet is. You haven't seen a porta potty in four weeks. You haven't showered in three weeks,” Lindsey said. “You're just so God-awful miserable, you end up having some of the most fun you've ever had in your entire life.” 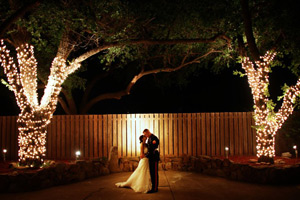 Zachary and his wife Megan Soliz on their wedding night.

Lindsey spent the first four years of his service deployed overseas, including two years in Iraq. In 2010, toward the end of his time in Iraq, Lindsey was wounded in an explosion, causing severe irreparable nerve damage.

“At first they couldn't figure out what was wrong with me, so they just had me on a lot of pain medication,” he said. “But that was probably the worst pain I've ever had.”

Lindsey needed several medical procedures to alleviate the severity of his nerve damage. In his last surgery in April 2013, he received metal implants all along the right side of his body, leaving him numb in his leg and with a partially functional arm.

With no chance of another deployment, Lindsey retired from the Marines in November 2013.

Shortly thereafter, he and his wife of eight years, Megan Soliz, left Washington D.C., and returned to Lubbock where Lindsey is finishing his degree at Texas Tech.

With a Dog At His Side

Retirement has been everything but easy for Lindsey. He said the tight-knit camaraderie and deep-rooted traditions of the Marine Corps is not easily forgotten. 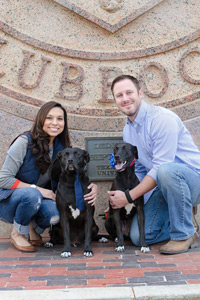 Zachary and Megan, with the two dogs they rescued, Dodger, left, and Dottie.

“When you leave a brotherhood like the Marine Corps, you feel a sense of grief and loss,” Lindsey said. “You feel disconnected from the people around you because they don't know what it's like to be in a war. It's like trying to explain the color blue to a blind person. Slowly you start to come around and enjoy your new surroundings. Plus, there is definitely a lot more scenery on a college campus than there is on a military insulation.”

Lindsey, a mechanical engineering major, is part of Texas Tech's Military and Veterans Program (MVP) and said its staff has been exceptionally accommodating and supportive throughout his transition.

"Those guys are awesome. Ryan Van Dusen and his staff are amazing," he said. "I came back and I had no idea where to go, what to do or anything, but they held my hand and have answers to any questions I have.”

As he slowly assimilates to life back home, Lindsey said he finds comfort and solace from veterans at the MVP center.

"I go to the veterans' center all the time,” Lindsey said. “I like to joke around and be around other veterans because, even if you never served with them, they served under the same circumstances you did. So that bond is already there."

Lindsey also has support from his best friend and service dog, Dodger, who helps carry his bags and books to class.

Dodger wasn't trained to be a service dog before Lindsey and his wife adopted him, but he said they bonded so quickly, he had to at least give him a chance.

"Normally they pick a service dog for you,” Lindsey said. "So I talked to the trainer and he agreed to let Dodger try to be a service dog. They said if he failed one thing, he was gone.” 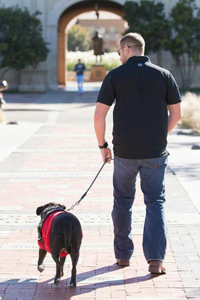 "I think he was specially meant for me. He's my best friend," Lindsey said. "He helps me out mentally just as much as he does physically."

While Dodger is an exceptional service dog, Lindsey said it's not all work and no play for his “man purse,” as he likes to call him.

“My favorite place to go on campus is the Engineering key,” said Lindsey. “I like to go out there by the long walkway and just take Dodger off his leash to goof off and run around.”

As Lindsey moves forward in his life after war, he said Texas Tech was the right place to start.

“I always heard about Texas Tech's veterans program being one of the best, and being a Red Raider means something special to me because I come from a family of Red Raiders,” he said. “My mom, my wife and my aunt are all Tech graduates.

“But, I met my best friends in the worst places during my service, and the Marines made me who I am today, so for that I will always be a Marine until the day I die.”

Getting to Know
Zachary Lindsey

A few weeks ago, I was recognized during the West Virginia football game. I don't like standing in front of crowds, and being in front of 65,000 people had me nervous, but it was great. Being down on the field was fun for me, Dodger, and Megan. It was really an honor because I'm really nothing special, I'm just a regular guy.

My favorite professors have to be Ram Iyers and Joseph Dannemiller. Iyers is my calculus professor and he's just awesome. We spend hours in his office going through my calculus homework. And professor Dannemiller was my instructor for introduction to engineering. They both worked with me all the time.

I like to go to the disabilities center in West Hall, on the third floor. They have this area for disabled people and I like to go there to relax and take Dodger off his leash.

My mom took me to my first Carol of Lights when I was a younger. She was going to school at Texas Tech, and I remember her taking me out there to see the lights. It's a really awesome tradition, and I don't know of any other universities that have something like that.

Well, it means something to me because a lot of family graduated from Texas Tech. So, it'll be something special when I graduate a Red Raider too.