From a written test to riding tryouts, the arduous process ensures the top student is chosen.

Every spring, when the Texas Tech University Masked Rider hands over their responsibilities to a new rider at the annual Transfer of the Reins ceremony, a new year begins with appearances, events and bone-chilling entrances at Texas Tech football games.

Choosing the new Masked Riders is no easy task, though. Months of different tests narrow down applicants one by one, leaving the best of the best. 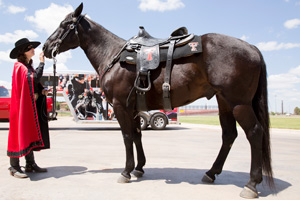 Every January, the process of finding a new Masked Rider begins. Those who wish to apply, first, must have the proper equestrian knowledge to be able to tend to horse Fearless Champion's needs and care. Candidates test their skills by taking a written exam covering basic horse knowledge.

The equine topics covered in the exam include:

Before candidates can participate in riding tryouts, each must score 80 percent or higher on the written exam and pass a preliminary screening for academic and employment eligibility. If they get past that portion, they advance to the riding portion of the tryouts, where each candidate rides Fearless Champion in front of a panel of judges. 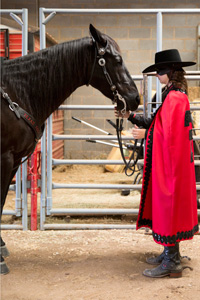 During the ride, candidates are judged on horsemanship skills, proper saddling and riding procedures and ability to execute basic riding maneuvers, including circles, gait transitions, stops, back and turns. Those who do not demonstrate proper horsemanship or skill are dismissed and their candidacy is terminated. Candidates who score 80 percent or higher on the riding portion move on to the next tryout task.

Those who pass the simulation test participate in 30-minute interviews with the Masked Rider Advisory Committee. Interview topics include public relations, horse care and the university.

After serving more than a decade as the university's mascot, horse Midnight Matador retired in October 2012 due to a leg injury, causing Texas Tech to search for a new horse.

After searching extensively, Texas Tech purchased Fearless Champion in 2013, a now 10-year-old Quarter Horse gelding from a ranch in Tulia.

Although the idea of purchasing a black Quarter Horse seems simple, Sam Jackson, associate chair and professor in the Department of Animal and Food Sciences and Masked Rider Program adviser, disagrees.

Jackson searched for three months before finding a horse that fit the strict qualifications.

When searching for a new horse, Jackson looked for these qualities: 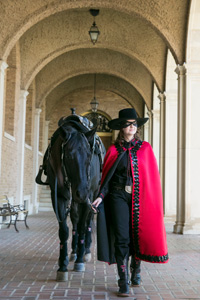 After receiving dozens of submissions, Jackson said it was easy to narrow the selections even before seeing the horses in person.

“We got video submissions with horses where the color was off or horses that were not well-trained,” Jackson said. “The Masked Rider horse must be able to take direction and be quiet in its disposition.”

Once Jackson narrowed the choices, he visited and rode the horses to see exactly how each acted. Those horses that exhibited the correct traits, were brought to Texas Tech to take in stimuli for a game.

Jackson said it is very hard for most horses to get through band practice without being distracted by all the noise.

“If the horse can't handle a band practice, then it would not be able to handle a football game,” he said.

Fearless Champion proved he was the right horse for the important job and was chosen to carry the Masked Rider across the field for years to come.