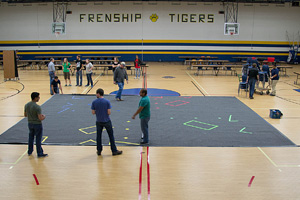 BEST is a robotics program that middle and high school students participate in across the nation, said Levi Johnson, senior project administrator for the STEM Center for Outreach, Research and Education (STEM-CORE). Texas Tech is host to the West Texas BEST program.

“West Texas BEST,” said Richard Gale, West Texas BEST hub director, “is the middle pipeline I put in place here to try to jump interest in STEM disciplines as early as elementary school and then provide continuity through the robotics competitions and programs that go all the way through graduate school at Texas Tech.”

The Texas Tech designed competition ends Dec. 7 after the country's other regional sections compete. This year no national championship occurs, Gale said, because it has not been three years yet. West Texas BEST competed in their regional competition Nov. 14-15.

“The teams did wonderfully well,” Gale said. “I have to brag on the Frenship team because they took the No. 2 spot for the highest award in the game, the BEST award, which includes the notebook, and robot, as well as the team's booth at the competition, and interviews with the judges. You have to have the whole package for the BEST award, and they were judged No. 2, which is great.”

The planning for the competition topic begins a year and a half ahead of schedule, Gale said. BEST's national organizers send out a request for proposals to every hub in the nation. To apply, hubs must create a rough outline of theme and show they have the resources to design and create the competition playing field. The hub's proposal involved creating a competition field that would involve the student-built robots transporting and assembling wind turbines. 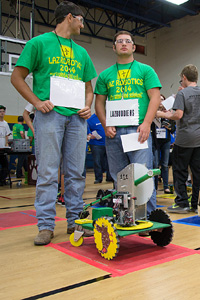 The competition surrounded wind turbines, Gale said, because the turbines are highly visible engineering around West Texas, and his hub co-director Stacey Young deals with the effects of oversized and overweight materials being transported across roads and bridges firsthand because of her work at the Texas Department of Transportation. Planners added an environmental stewardship component to the competition because it is an important concept for young engineers to understand.

“It was a really popular game,” Gale said, “and I sort of chuckle when I say that, because we didn't think it was going to be because there were lots of complaints about it going forward when we had the rules sent out.”

West Texas BEST extends invitations to about 26 middle and high schools in Lubbock and surrounding areas, and about 20 schools participate in the competition each year, Gale said. During the state competition, students are expected to modify the project they already created, Gale said. About 60 teams competed throughout the state.

“This is a particularly exciting program in that middle and high schools get to participate at essentially no cost,” Johnson said, “as the hubs raise the necessary funds to provide the bulk of the materials.”

During a six-week period students build, program, test and modify robots and complete required tasks outlined as part of the game, Johnson said. Students also create engineering notebooks, table displays and a presentation discussing the development and creative process behind their robot, which are given to judges at the competition.

The West Texas BEST regional hub was established in 1995, according to the BEST website. Texas Tech sponsors and funds the program with help from local industry, Gale said. The purpose of BEST and the other robotics programs at Texas Tech is to increase enrollments in the STEM disciplines.

College of Engineering students can participate in the program, Gale said. West Texas BEST has students who participated in robotics competitions in high school and wanted to remain involved, students involved in organizations such as the Institute of Electrical and Electronics Engineers and Eta Kappa Nu as well as students needing 10 hours of professional development for service for their laboratory classes. Students have started their own teams with their professional companies after they graduated.

“There are several opportunities for involvement,” Gale said. “I think the most valuable for our undergraduates is the opportunity for leadership development. They work with the high school student participants in the programs directly. They coach them in programming, design, the entire engineering design process and critical thinking.” 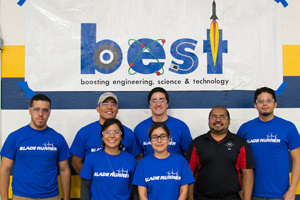 Those participating in the program learn about the engineering design process and electrical engineering through motors and batteries used to create the windmill as well as the programming skills needed, Gale said. They also learn to communicate better and how to work on teams through the process.

Krista Petty, a sophomore art history major from Wake Village, was the coordinator of this year's program. She coordinated volunteers who worked jobs that included safety, scoring and maintenance of robots. She also made sure the necessary equipment was present where it was needed.

“I've only been involved with BEST for a year,” she said. “Due in part to this, I have seen only one side of the program, which is the competition. I greatly enjoyed the actual game because I saw the results and performances of intelligent middle school and high school teams.”

Ismael Castillo-Avila, a senior mechanical engineering major from Baytown, has been involved with the BEST program in various aspects since 2011. Most recently, he helped design the prototype and build the 2014 BEST game with Gale and other members. He said his favorite part of the program was the mixture between applying mechanical engineering concepts learned in class to real world projects, and he liked mentoring the local Lubbock teams during the competition.

“We want to deliver the message that engineering is important,” Gale said. “We want to encourage students to at least investigate the STEM disciplines. We try to share our love for engineering. Competitions like this go a long way toward giving students a practical appreciation for a lot of the theoretical concepts that they learn in school.”