The technology is licensed through Office of Research Commercialization. 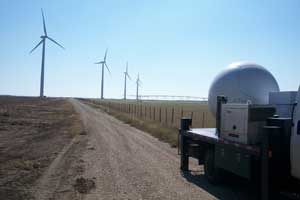 A patent-pending concept developed at Texas Tech University could make it happen for wind plants around the world.

“Many wind farms are not producing as much power as we would expect,” said John Schroeder, professor of atmospheric sciences. “With a better understanding of how turbines interact with each other, we may be able to make small adjustments that could be worth millions.”

Texas Tech is home to the National Wind Institute, the nation's leader in research through an interdisciplinary approach to all things wind. Schroeder and research professors Brian Hirth and Jerry Guynes are the inventors on two recently filed U.S. patent applications for the optimization of wind plant performance through the use of radar technology and associated analysis techniques.

“Dr. Schroeder's work is an example of how Texas Tech basic research innovation can have a profound impact on the marketplace,”  said Robert V. Duncan, vice president for research. “We have been doing important fundamental research in wind since 1970, and this is one example of how long-term basic research leads to new economic opportunities.” 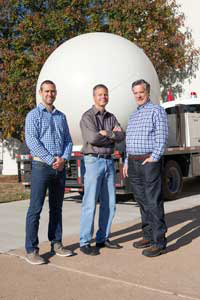 “The idea is to take what we've been doing in the research realm and, through the company, provide a commercial vehicle to offer it to industry that can benefit from it,” Schroeder said. “It is technology developed at Texas Tech, licensed and ready to be used by industry.”

The patents include the use of radar technologies and subsequent analysis concepts for wind energy applications.  Using the enhanced information about flow conditions enables proactive controls to be developed that can minimize turbine-to-turbine interaction and maximize power generation, Schroeder said.

The patents were filed by the Office of Research Commercialization, an office of Texas Tech that works with researchers and business partners to help translate research discoveries into commercial applications and successfully bring them to market.

“As a public research university we have a responsibility to find commercial partners that want to apply our technologies to solve real-world problems,” said Russell Thomasson, associate vice president for research commercialization.  “In this case, the wind research that was completed at the National Wind Institute created intellectual property that was licensed to a local start-up company.  They are working with large, national wind generation companies to make wind energy more efficient for everyone.”

“It benefits wind energy, it benefits society and it benefits Texas Tech,” Schroeder said. “The endpoint of this research and commercialization process will have an impact well beyond the university.”