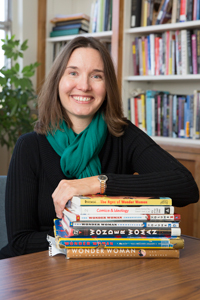 Keira Williams's first book investigated the gender politics of a southern woman who drowned her two children then spent nine days telling the story of a black man kidnapping them. For her second book, she found a lighter topic – Wonder Woman.

She found the man behind Wonder Woman was a woefully unrecognized polyamorous feminist who was part of a century of trends regarding the portrayal of feminism and matriarchal societies in U.S. popular culture.

Williams, an assistant professor who teaches history and women's studies for the Honors College, heard of William Moulton Marston, the creator of Wonder Woman, when a photojournalist friend called her from the Smithsonian. This friend was taking pictures of some of the library's collections and had just learned about Marston's unusual life, which spanned law school, teaching psychology and going to Hollywood before creating the country's most well-known superheroine.

“I really don't have much of an argument yet, except a vague one that each of these matriarchies will tell us something specific about that era in American culture,” Williams said. “But I don't know what the specifics are yet because I haven't done all of the research in order to be able to compare them all.”

The historian recently received a residential scholarship from the Smithsonian Libraries to research Marston and his varied professional and personal life as part of her overall research on a new book. She'll compare matriarchies in pop culture ranging from feminist utopian novels of the early 1900s to the men's rights movement that has surged in recent years. She'll spend a month next summer at the Dibner Library of the History of Science and Technology going through Marston's personal papers, reading published clips about him and reading every single Wonder Woman comic from 1941 to today, plus early unpublished sketches.

“I'm interested just to get my hands on some of those and see what they look like,” she said. 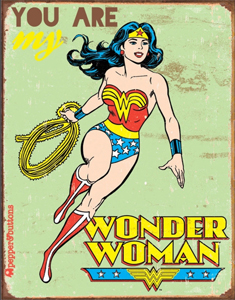 Marston's bedazzled heroine came to the United States from Paradise Island, a utopian land of Amazon women who fled from ancient Greece and were granted immortality and superpowers. Wonder Woman, who left the island to bring back an American whose plane crashed, had a lasso of truth and bracelets that could stop bullets.

She was in her heyday in the early 1940s, Williams said. Comic books had just become popular, and Wonder Woman followed Superman and Batman. She was most popular among teenage boys who were and still remain the largest market for comic books, but she's the most widely read comic among girls. She was undoubtedly a feminist who didn't fit into any of the gender stereotypes of her day.

After Marston's death from cancer in 1947, the comic declined in terms of popularity and as a feminist icon, Williams said. From 1968 to 1972, Wonder Woman traded in her superpowers for martial arts and a clothing boutique in Manhattan.

“She seems like she must have fallen by the wayside at some point, but it's because she doesn't have these other manifestations,” Williams said. “She's not like Superman, who gets a new movie every decade. Wonder Woman doesn't seem to translate to the screen as well, or at least no one has done it right.”

Today, however, the star-spangled superheroine is on her way up. Her comic book's popularity is on the upswing, DC Comics has announced a Wonder Woman movie is in the works and promised she would appear in other superhero movies. The first published biography of Marston just hit bookshelves.

Wonder Woman, in fact, was on the cover of the New York Review of Books in early November.

“I think she's having a renaissance,” Williams said.

The rest of the book

Williams' research starts in the late 1800s and early 1900s. Chapter 1 starts with the Chicago World Fair, which included an exhibit of “African Amazons,” supposedly a tribe of female warriors from various parts of Africa. Williams said the exhibit intended to juxtapose this primitive matriarchal society with the civilized American patriarchy of the day, making it both sexist and racist. 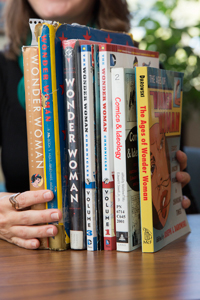 That chapter then moved to the turn of the century, as a flurry of matriarchal utopian novels from feminist writers appeared. Those books compared societies set either far in the past or future to the perceived broken patriarchal societies of that time.

“Their idea was to sort of show the problems with male dominance or patriarchy in current society by making up this other society,” she said.

Those literary utopias worked about as well as all the other utopias depicted in novels.

“There are problems with all of them,” Williams said. “Even if you identify as a feminist you read these feminist matriarchies and you're like, ‘I do not want to live there. It does not sound wonderful.'”

Wonder Woman will come next, and the rest of the book will expand as Williams goes through literature, articles and various other media to examine feminism and matriarchy in American literature, movies, TV shows and music. She'll spend some of her time in Washington, D.C., looking up other matriarchal societies, and she has a few trips planned to various universities and libraries throughout the country to go through their documents.

Her final chapter will run up to the present. Matriarchal influences manifest differently today than they did a century ago, Williams said. In the age of social media and the blogosphere, the group most likely to be discussing matriarchies is the men's rights movement. They're not thinking of a utopian Paradise Island, though. Men's rights activists raise up and rail against a Hillary Clinton-led dystopia.

“That's the word they use. Their big fear is matriarchy,” Williams said. “We're all going to hell in a hand basket if a matriarchy takes over is what these men fear.”

After completing her research at the Smithsonian, Williams hopes to have a book proposal to publishers by fall 2015.

William Marston , Wonder Woman's creator, had unusual ideas for the 1930s. His wife was the primary breadwinner. His mistress lived with his family and they told everyone, even her kids, that she was a live-in nanny. He had ideas about dominance, submission and world peace at a time when the country was caught between two world wars and a depression.

“He thought women had overexaggerated their submissive instinct to men, and men in turn had overexaggerated their dominant instinct,” Williams said. “The way to right that balance was for women to start exaggerating their dominant instincts and for men to submit to women. You can see some of these theories playing out in Wonder Woman. She ties men up all the time and makes them tell the truth.

“Wonder Woman was kind of his manifestation of his pop cultural theories.”

Sound a little, well, kinky? That's Marston. He didn't shy away from sex talks, including a love advice column for “Family Circle” magazine and a book purported to be a biography of Julius Caesar, which Williams said was basically soft-core pornography.

The Marston Family
After Marston died of cancer in 1947, Elizabeth and Olive raised their children together and were partners until Olive's death in the late 80s.

Additionally, his mistress, Olive Byrne, was the niece of Margaret Sanger, the founder of Planned Parenthood and mother of birth control.

In addition to teaching and writing, Marston was one of the investors of the first lie detector test, which is why his papers are in the science and technology library. Lilla Vekerdy, the head of special collections for the Dibner Library, said Williams' proposal rose to the top both because of its thoroughness but also because of its unusual nature.

“Her clearly stated project proposal approaches the subject from intriguing points of view, like Marston's psychological and social ideas which played such an important role in the formulation of Wonder Woman's story and character,” Vekerdy said.