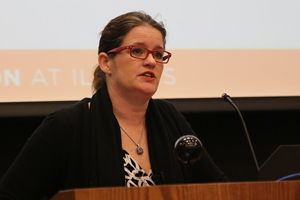 Dorothy Espelage is the nation's foremost expert on bullying and school violence.

A college professor got a phone call from Vice President Joe Biden's office a few weeks ago. The staff member on the other end wanted to share Biden's recent revelation: The unprecedentedly high rates of teen dating violence reported in a recent study probably were related to the increasing rates of sexual assault among college students.

Dorothy Espelage, a psychology professor at the University of Illinois at Urbana-Champaign and one of the nation's foremost experts on bullying and violence in schools, agreed with the vice president. Sexual assault, which experts say is about power, not sex, is similar in its complexity to bullying – a puzzle that includes home life, family relationships, school and community environment, an imbalance of power between victim and perpetrator and a fear of speaking up.

To make the puzzle even more complex, much of the information on bullying isn't grounded in science. Without real understanding of the problem, Espelage says, there's no way to reach an effective solution.

“Everybody in this country thinks they understand bullying,” Espelage said.

Espelage was at the College of Education at Texas Tech University on Monday, speaking to students, faculty members, local teachers and administrators about how to combat bullying in U.S. schools. It's not easy, she cautioned, but it's possible.

The education field needs her activism and Texas Tech needs her message, said Patricia Hawley, a professor in the College of Education who also researches bullying. Her primary research focus is power structures in social group, and her work and Espelage's work frequently overlap. She invited Espelage to share her research with the Texas Tech and Lubbock communities. 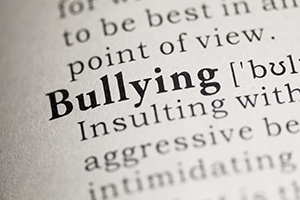 An action becomes bully behavior when one child has or is perceived to have more power than the other.

“Dorothy Espelage is the face of bullying intervention research in North America, and the timing is perfect to introduce our efforts in this domain,” Hawley said.

Bullying does not include every conflict between students. If two kids who have equal social status and the same amount of power get into a fight on the playground, it likely would not be considered bullying by researchers and practitioners. An action becomes bully behavior when one child has or is perceived to have more power than the other (i.e. more popular, outnumbers or corners the victim); if the action has been repeated or is likely to be repeated; or if the victim feels intimidated or humiliated as a result of the action.

Espelage said teachers must pay attention, ask questions of the victim and be aware that even if this is the first time the child has spoken up, it probably isn't the first time it has happened.

“What they don't understand is that social science says very, very clearly that if kids are victimized, they change their behavior so it might not happen again,” she said. “We cannot wait for it to happen again. Take every incident seriously. Do the investigation. Bullying does not end on its own.”

She suggested stakeholders more effectively address bullying by dropping the word from conversations about bullying. It's too easy to label an action bullying and too difficult to address specific problems with an overly broad term. Espelage encourages parents and teachers to ask what happened: Did someone call you a name? Did another child take your lunch money? Did a classmate hit you, push you down or start a rumor about you? Specific language allows parents, teachers and administrators to address specific problems. 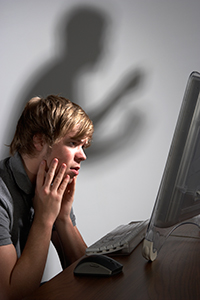 More than a third of children bullied said they experienced bullying in person, not just online.

Where does bullying happen?

The Internet and cell phones introduced new spaces for kids to communicate with each other, but in the rush to monitor cyberbullying, many administrators have left behind the still-sizable issue of face-to-face bully behavior. More than a third of children bullied said they experienced bullying in person, not just online.

“I always tell administrators if you paid attention to face-to-face bullying like you do to cyberbullying, you would see it all the time too,” Espelage said. “If you're only addressing cyberbullying and minimizing face to face bullying, you will fail. You need to address your school climate in which this is occurring.”

Who is involved in bully behavior?

No single risk factor indicates a child will be involved in bullying, either as an aggressor or a victim. There are potential red flags, including depression or anxiety, lack of empathy, delinquency and being exposed to violence in the home. (The last factor is especially true for girls, Espelage said.)

Red flags for high rates of bully involvement in a family or school include lack of supervision or discipline, negative or critical relationships and support for or actual violence. High rates and acceptance of bullying in schools also leads to students not standing up for victims.

“If you're in a school with high rates of bullying, do not bring an intervention program until you reduce bullying,” Espelage said, adding that if even students think about standing up to a bully, they won't if they don't feel they're in a safe space. “Teachers' attitudes make a difference. If teachers don't intervene, kids aren't going to intervene.”

How do we create safe spaces? 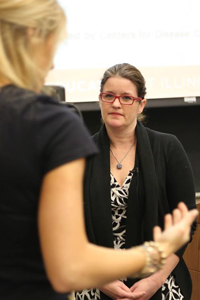 Espelage spoke at the College of Education Monday.

Since every group in the social ecology is involved in the perpetration of bullying, every group needs to be involved in intervention and prevention as well, Espelage said. Parents need to be where their kids are: Facebook, Twitter, Snapchat. Parents cannot effectively monitor their children if they are not on these media, she said. Administrators must recognize this technology is in their schools and work with it.

She also said teachers, administrators and parents need to buy into social-emotional learning (SEL) programs. SEL focuses on the development of a core set of social and emotional skills that help young people make decisions, handle challenges, resolve conflict and create healthy relationships, Espelage told the group. When teachers teach a quality SEL curriculum, they create classrooms where students can be without fear.

Of course, teachers need to know how to create that kind of classroom. It's not intuitive, said Hawley, who has prepared a curriculum to teach pre-service teachers how to ask the right questions and create a safe classroom. Often new teachers are overwhelmed just being in the classroom for the first time to focus effectively on bullying prevention. This curriculum will empower those first-year teachers.

“Teachers are on the front line of some of these issues and we want to help them feel comfortable in their classrooms and bolster their confidence that they can be that invisible hand to guide the children's relationships,” she said.

Most importantly, Espelage said, everyone involved in this conversation needs to recognize that what is happening in schools throughout the country now is not working. By and large the programs are not effective and are not “better than nothing,” as she frequently hears. Many students are simply tuning out the message.

“We have to think differently,” she said. 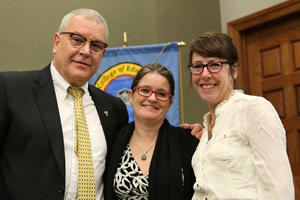 Parents should create a safe space by monitoring their children's phones, social media and Internet activity. Parents should know who their children are friends with, where they are and what their kids are doing. With buy-in at all levels, Espelage said, society can produce children who are socially and emotionally able to resolve conflict, create relationships and express themselves in positive ways no matter where they are.

“If we create safe spaces in schools where kids learn skills for healthy relationships, I have to believe we are also paving the way for how they interact through social media,” she said.

Those aren't the only numbers indicating what they're doing is working. Teachers and administrators can judge the effectiveness of bully prevention programs by their students' academic performance.

“If you're in a school with SEL programming, your test scores will go up 11 percent,” Espelage said. “That's major.”

Bullying is an epidemic.

It is a public health problem, Espelage said, but it's not happening to most children and it's not spreading beyond society's control. Bullying can be stopped.

There are places you can go where bullying does not happen,” she said, adding she'd spoken with a local principal that morning who told her bullying was a rarity at her school. The principal said she knew of only three instances of actual bullying; the rate was so low because students and teachers knew she investigated complaints and cracked down when necessary. She didn't tolerate it, the principal said.

“If we simply did that, we would have less of this,” Espelage said.

Being bullied leads children to suicide.

There are two types of bullies. The first type is the socially unskilled, “mean” kids who are quickly labeled as troublemakers.

“Those kids show up in your principal's office,” Espelage said. “They don't have social capital and kids will turn them in.”

The second type is more Machiavellian, she said. They are overrepresented in the athletic and popular groups and can turn their behavior on and off depending on their circumstances. They're less likely to get caught, less likely to be told on and less likely to be seen as a bad kid. Bullying helps their social status unless schools, families and communities create an environment in which being a bully does not make one cool.

Bullies need to be punished.

Bullies frequently act according to what they've learned in their homes, classrooms and communities. They may come from a home where they're bullied.

They may go to a school where the teacher or the principal is a bully. They may live in a community when the person in charge is a bully. They are responding to their environments, Espelage said. While bullies need to receive appropriate consequences, especially as they get older and have greater understanding of their actions, they need to learn bullying behavior won't be tolerated and how to have healthy relationships.

Espelage said in all her years of researching bullying, four parents have said their children have engaged in bullying behavior. Since about 17 percent of children engage in bullying, either parents are lying or have no idea their children are bullies because they don't exhibit that behavior at home. Good kids can get involved in bullying, she said. No family, however functional, is immune.